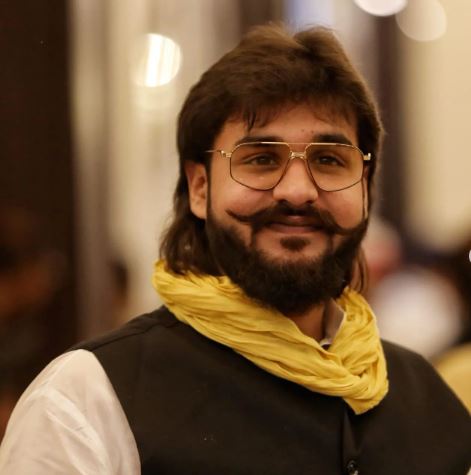 Abbas Ansari is an Indian politician and a skeet shooter. In 2022, he became a Member of the Legislative Assembly from the Mau constituency of Uttar Pradesh on a ticket from the Suheldev Bharatiya Samaj Party. He is the son of the jailed mafia don and politician Mukhtar Ansari. In 2022, he was declared an absconder by the Lucknow bench of Allahabad High Court after he failed to appear in court in the illegal arms purchase case.

Abbas Ansari was born as Abbas Bin Mukhtar Ansari on Wednesday, 12 February 1992 (age 30 years; as of 2022) in Ghazipur, Uttar Pradesh. His zodiac sign is Aquarius.
Abbas Ansari’s childhood picture
Abbas hails from a family of politicians. He pursued his class 12 from G.D. Goenka World School, Sohna, Gurgaon, Haryana (2011). He holds a degree in business management.

Abbas belongs to a Muslim family of Sunni caste and follows Islam.

Abbas Ansari started his career as a skeet shooter. He is one of the few shooters who excel in all three categories- big bore skeet, rifle and pistol. Abbas won his first national championship in 2011 in the shotgun category.
Abbas Ansari during his shooting practice
He then bagged gold medals in two more national championships in shooting. Later, he was selected in Indian shooting team that participated in international events. Abbas represented India in two shooting world cups in Germany and Finland.
Abbas Ansari during his shooting championship
In 2014, he was practising for the Rio Olympics, however, he could not qualify for the same as he met with an accident. In 2015, he participated in the National Shotgun Shooting Championship.
Abbas Ansari at 63 National Shooting Championship in New Delhi

Abbas began his career in politics in 2016 by joining the Bahujan Samaj Party. In 2017, he contested the Uttar Pradesh Legislative Assembly Elections from the Ghosi constituency on a ticket from the Bahujan Samaj Party. However, he lost the elections to Fagu Chauhan of the Bharatiya Janata Party.
Abbas Ansari as a candidate of the BSP
In 2022, Abbas won the Uttar Pradesh Legislative Assembly election from Mau. He contested the elections on behalf of the Suheldev Bharatiya Samaj Party, an ally of the Samajwadi Party.
Abbas Ansari with his party members
The seat was earlier occupied by his father, Mukhtar Ansari; Mukhtar represented the Mau Sadar constituency as MLA five times since 1996.
Abbas Ansari during Maha Rally in Uttar Pradesh
During a media conversation, when the reporters asked him why his father did not file his nomination, Abbas replied,
You should ask the government and administration about this.”

On 12 October 2019, an FIR was lodged against Abbas Ansari by Inspector Ashok Singh, the then in charge of the Mahanagar police station. In the FIR, it was alleged that Abbas had obtained a gun license from Lucknow and then he got it transferred to Delhi, where he purchased many arms. Later, a charge sheet was filed against him on 24 December 2020. Later, the court issued an arrest warrant against Abbas for procuring multiple arms fraudulently on a single arms licence. Various summons were issued against him, however, Abbas did not show up in the court. The MP-MLA court even extended the time of his arrest thrice, but on his repeated absence from court the Special ACJM of MPMLA Court Ambrish Srivastava declared Abbas ‘absconding’ by issuing 82 Criminal Procedure Code against him on the request of the police. The court also issued notice to seize his property, a non-bailable warrant, and a lookout notice against him. Although Ansari applied for an anticipatory bail, the court did not approve it. The court while rejecting the application said,
Considering serious allegations that the accused-applicant got registered his arms licence fraudulently and obtained prohibited barrels, weapons and cartridges in large numbers by taking the ground of shooting; and he has purchased weapons and cartridges, which are prohibited in shooting practice and against the Notification dated 4.8.2014 of the Government of India.”
The court further said,
And also considering the fact that accused-applicant has been avoiding the process of the court against whom proclamation has been issued, this court does not find any ground to grant anticipatory bail to the accused-applicant.”