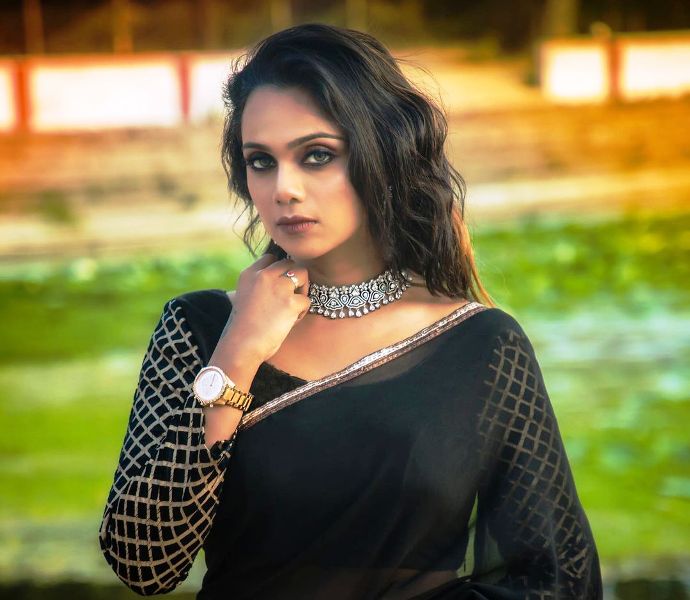 Abhinayashree or Abhiyana Sri is an Indian actress and choreographer who predominantly works in the Telugu and Tamil film industries. She is known for her performance in Paisalo Paramatma (2006) for she won the Nandi Award for Best Female Comedian.

Abinaya Satish Kumar or Abhinayashree was born on Friday, 25 March 1988 (age 34 years; as of 2022) and she hails from Chennai, Tamil Nadu. Her zodiac sign is Pisces. She has studied till class 6.
Childhood picture of Abhinayashree with her brother

At the age of 12, she made her debut when she played Abhirami in the Tamil comedy film Friends (2001), alongside actors Vijay and Suriya.
Abhinayashree as Abhirami Friends (2001)
In the same year, she also forayed into Telugu cinema with the buddy comedy-drama film Snehamante Idera in which she played the role of Swathi.
Abhinayashree as Swathi in Snehamante Idera (2001)
In 2002, she appeared in the Tamil films Saptham as Jennifer, 123 as Jyothi, and in Maaran for an item number. Her role in Prabhu Deva-Jyothika’s “123” also garnered wide reach among the audience. In the same year, she made her debut in the Kannada film industry with the gangster film Kariya in which she played the role of Maya.
Abhinayashree as Maya in Kariya (2002)
In 2002, she also forayed into Malayalam cinema with the item number ‘Kombedu Kuzhaledu’ featured in the film Thandavam.
Abhinayashree (rightmost) featured in the item number ‘Kombedu Kuzhaledu’ from the film Thandavam (2002)
Other Malayalam films under her belt include Pranayamanithooval (2002) and Nanma (2007). At the age of 15, she received a breakthrough in her career when she featured alongside Allu Arjun in the 2004 Telugu film Arya for an item number song titled “Aa Ante Amalapuram.”
Allu Arjun and Abhinayashree in the song Aa Ante Amalapuram from the film Arya (2004)
She played her first lead role in the 2005 Telugu comedy Hungama appearing alongside Ali and Venu Madhav. She gained popularity in 2006 when she played a comedy role in the Telugu film Paisalo Paramatma. The role earned her a Nandi Award for Best Female Comedian in the same year.
Abhinayashree in the film Paisalo Paramatma (2006)
She was immensely appreciated for her comedy role in the Telugu Athili Sattibabu LKG (2007).
Abhinayashree in Athili Sattibabu LKG (2007)
In 2007, she made her debut in the Oriya film industry with the item number Aa Mane Anandapur (Oriya version of Aa Ante Amalapuram from the film Arya (2004)) featured in the film Pagala Premi.
Abhinayashree and Hara Patnaik in Aa Mane Anandapur from the film Pagala Premi (2007)
In the 2009 Telugu action film Ek Niranjan, she played the role of Guru’s wife; the role of Guru was played by Telugu actor Brahmanandam. In the film, she shared the screen with renowned Indian actors like Prabhas, Kangana Ranaut, and Sonu Sood.
Abhinayashree (as Guru’s wife) sharing the screen with Brahmanandam (as Guru) in the film Ek Niranjan (2009)
Other Telugu films in which she appeared include Evadi Gola Vaadidhi (2005), Bhagyalakshmi Bumper Draw (2006), Michael Madana Kamaraju (2008), and Uu Kodathara? Ulikki Padathara? (2012). Various Tamil films under her belt like Agra (2007), Pathu Pathu (2008), Enga Raasi Nalla Raasi (2009), Palakkattu Madhavan (2015), and Boom Boom Kaalai (2021).

In 2015, he hosted the dance reality TV show Junior Super Dancer on Polimer TV.
Abhinayashree hosting Junior Super Dancer on Polimer TV
She appeared as a contestant on Sun TV’s Star Wars, a 2017-2018 Tamil Celebrity Couples stunt/dare reality-comedy game show. In 2017, she contested in the Tamil reality show Dance Jodi Dance (season 2).
Abhinayashree in Dance Jodi Dance (season 2)
In 2022, she became a household name when she appeared as a contestant on Bigg Boss (Telugu season 6) which aired on Star Maa.
Abhinayashree on Bigg Boss (Telugu season 6)
Others
Apart from being an actor, she is also a skilled dance choreographer. In May 2018, she started a dance studio ADC ABI Dance Company. In 2021, she started the YouTube channel Anu & Abi Vlogs with her mother, Anuradha. The channel features the daily lifestyle vlogs of the mother daughter duo.