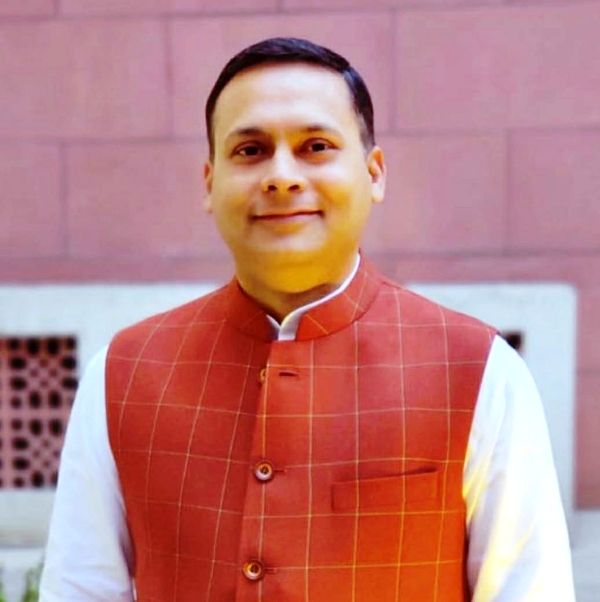 Amit Malviya is an Indian politician associated with the Bharatiya Janata Party (BJP) as the national convener of its IT cell.

Amit Malviya was born on 9 October, and he hails from Prayagraj, Uttar Pradesh. From 1995 to 1998, he pursued a Bachelor of Business Management at Dayalbagh Educational Institute in Agra, Uttar Pradesh. In 2000, he completed his PGDM in Finance and Systems from Symbiosis Institute of Management Studies, Pune.

Not much information is available about his parents and siblings.

Not much is known about his wife and children.
Amit Malviya with his wife

After completing his formal education, he started his career as an Assistant Manager at ICICI Bank, Mumbai, in 2000. In October 2001, he started working as a Business Analyst at Calyon. In 2003, he joined HSBC and retired from there as a Vice President in 2010. From July 2010 to June 2012, he held the position of Vice President – Global Treasury Sales, South at the Bank of America in Bengaluru. In 2015, he moved to Dehli, where he became the head of the BJP IT Cell. His association with BJP can be traced back to 2009 while he was working as a banker. That year, he co-founded the forum Friends of BJP which launched an SMS campaign to publicize the party and bring it to power. Other founding members included Rajesh Jain, managing director of Mumbai-based IT firm Net Core Solutions, and Piyush Goel, a financial consultant. They urged people to join the group by logging into www.friendsofbjp.org. A public meeting arranged in Lucknow catapulted to Malviya prominence. Ahead of the 2021 West Bengal Legislative Assembly elections, the BJP appointed Malviya as the co-incharge to oversee party affairs in the state. He has also co-authored the books Heterosis and Combining Ability Analysis of Bottle Gourd’ with D R Bhanderi and ‘THE CITIZENSHIP DEBATE: CAA & NRC’ with Salman Khurshid.

A Series of Disinformation Campaigns

Malviya is often accused of spreading disinformation and peddling fake news from the BJP’s social media handles. In January 2020, Amit Malviya shared a video on his Twitter account in which a group of men talked about the Shaheen Bagh protesters. The video suggested that women who were protesting against the Citizenship Amendment Act (CAA) at Shaheen Bagh, Dehli, were receiving money for it. A man in the video further claimed that the protest was “sponsored” by the Congress party. The allegations were found baseless by a collaborative investigation by fact-checking sites Alt News and Newslaundry.

Two days after the “Sponsored Shaheen Bagh Protest” video, shared a photograph of an elderly Muslim man eating biryani at Shaheen Bagh with the caption which read,
Proof of Biryani being distributed at Shaheen Bagh!”
Alluding the act of eating food at a protest site was regarded as “bizarre” by various media houses. Thereafter, Alt News started monitoring his social media presence and discovered that Malviya repeatedly used misinformation to discredit individuals, communities, opposition parties, leaders, and movements. In December 2019, Malviya claimed that ‘Pakistan Zindabad’ slogans were raised during the anti-CAA rally at Lucknow’s Clock Tower. Alt News clarified that protesters did not raise pro-Pakistan slogans but said ‘Kashif Saab Zindabad.’ Reportedly, Kashif Ahmad was the chief of All India Majlis-E-Ittehadul Muslimeen (AIMIM), who was leading the anti-CAA protest in Lucknow.

Since this is a season of pulling out old videos, here is one from Lucknow where anti-CAA protestors can be seen raising ‘Pakistan Zindabad’ slogans… Damn! Someone needs to have a samvaad with them and ask them to carry tricolour and Bapu’s picture for the cameras next time… pic.twitter.com/Lvg7sj2G9Z
— Amit Malviya (@amitmalviya) December 28, 2019

On 16 December 2019, he posted a video featuring Aligarh Muslim University (AMU) students protesting against the Citizenship Amendment Act claiming that they raised slogans against Hindus. His caption read,
AMU students are chanting ‘हिंदुओ की कब्र खुदेगी, AMU की धरती पर…”
which translated to, “The grave of Hindus will be dug on the chest of AMU.”

AMU students are chanting ‘हिंदुओ की कब्र खुदेगी, AMU की धरती पर…’
Chaps at Jamia want ‘हिंदुओं से आज़ादी…’
If this is the mindset that pervades in these ‘minority’ institutions, imagine the plight of Hindus and other minorities in Pakistan, Bangladesh and Afghanistan… pic.twitter.com/VRNeOyhaHY
— Amit Malviya (@amitmalviya) December 15, 2019

In October 2022, Amit Malviya filed an FIR against The Wire for ‘tarnishing his reputation.’ The founder Siddharth Vardajaran, along with editors Siddharth Bhatia, M K Venu, and Jahnavi Sen were booked by the Dehli police under sections 420 (cheating), 468 (forgery with the purpose of cheating), 469 (forgery for harming reputation), 471 (using forged document), 500 (defamation), 120B (criminal conspiracy) and 34 (common intention) of IPC. The Wire in a series of news reports, which were later retracted, had alleged that Meta, the parent company of WhatsApp, Facebook, and Instagram, had granted special privileges to Malviya that enable him to remove any content that he thought was critical of the BJP.

On 28 November 2020, Rahul Gandhi posted a tweet showing a policeman charging an aged farmer which read,
It is a very sad photo. Our slogan was ‘Jai Jawan, Jai Kisan’, but today, PM Modi’s arrogance has made the jawan stand against the farmer. This is very dangerous.”
The tweet showcased a farmer being lathi-charged during the 2020–2021 Indian farmers’ protest. Subsequently, Amit Malviya challenged Rahul’s his assertion by posting a tweet in which he compared two visuals — the first visual was the image posted by Rahul Gandhi, which was labelled “propaganda,” and the second visual was a short video clip titled “reality,” which claimed that the police didn’t even touch the farmer.

Rahul Gandhi must be the most discredited opposition leader India has seen in a long long time. https://t.co/9wQeNE5xAP pic.twitter.com/b4HjXTHPSx
— Amit Malviya (@amitmalviya) November 28, 2020

In December 2020, Twitter labelled Amit Malviya’s tweet as “manipulated media” based on its Synthetic and Manipulated Media policy. Apparently, Boom, a fact-checking site, spoke to the farmer in the image, Sukhdev Singh, and that confirmed he had sustained injuries in the police charge.

In September 2020, Subramanian Swamy of the BJP accused Amit Malviya of running a campaign against him using fake tweets. He also gave an ultimatum to the party to remove Malviya from the position of head of the BJP IT Cell. Swamy said that removing Malviya is the “compromise proposal” he has made to party president J.P. Nadda. If Malviya was not removed, he said, it would mean the party is not willing to “defend me”. Despite his ultimatum, the BJP reappointed Malviya as the party’s IT cell chief. Thereafter, Swamy posted a tweet which read,
Now that Malaviya has been re appointed, I have this to say: My earlier tweet was to test whether Malviya financed fake ID tweets on his own or not. Now it is clear. PMO Haren Joshi was behind it. I have written to PM two weeks or so ago bringing this to his notice with documents.”