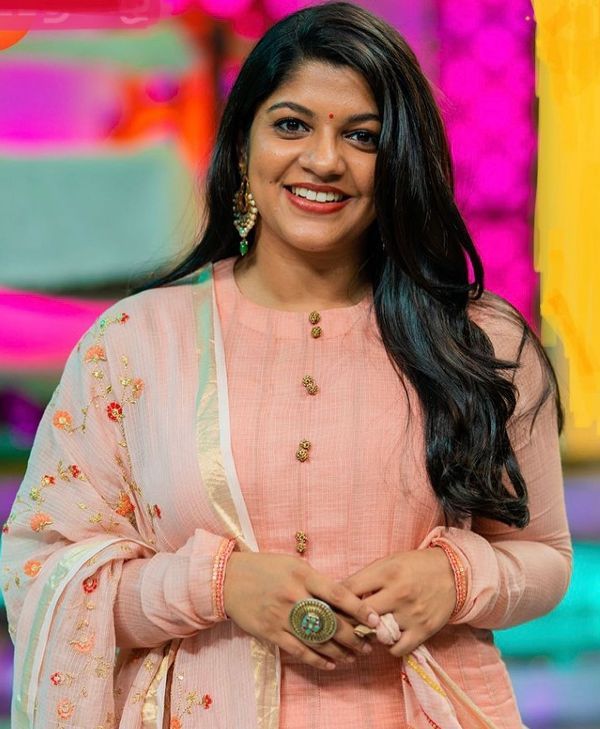 Aparna Balamurali is an Indian actress, singer and classical dancer, known for her work in Malayalam and Tamil movies. She is known for her roles in movies such as Maheshinte Prathikaaram (2016), Soorarai Pottru (2020), and many more.

Aparna Balamurali was born on Sunday, 11 September 1995 (age 26 years; as of 2021) in  Thrissur, Kerala (India). Her zodiac sign is Virgo. She studied at Devamatha CMI Public School, Thrissur and pursued a Bachelor of Architecture at Global Institute of Architecture, Palakkad (Kerala).
A childhood picture of Aparna Baramurali

Aparna Baramurali was born and brought up in Kerala by her parents. Her father’s name is Bala Murali and her mother’s name is Sobha. She has a sister whose name is Karthika Vaidyanathan, who is a playback singer and director of a virtual academy called ‘swarāksharā’. She has shared pictures with her family while reminiscing her childhood memories.
Aparna with her parents

Debuting in Yathra Thudarunnu (a Malayalam Drama movie directed by Jayan Sivapuram), Aparna Balamurali started her career in 2013 at the age of 18.
Aparna in a still from the Malayalam film Yathra Thudarunnu
In 2015, She was cast in Oru Second class yathra, which is a comedy thriller drama film. Then she played the role of Jimsy Augustine, a college student in Maheshinte Prathikaaram(2016) which was her big break. She soon gained fame after the movie was released.
Aparna as Jimsy Augustine in a still from the movie Maheshinte Prathikaaram(2016)

Later on, she did several Tamil movies like 8 Thottakkal(2017), Soorarai Pottru(2020) and Theethum Nandrum(2021). Her latest Tamil film is Veetla Vishesham(2022) which is a Tamil version of the famous Bollywood movie -‘ Badhaai Ho’ (2018). The directors of this film are RJ Balaji and NJ Saravanan. During an interview talking about her Tamil movie Soorarai Pottru, Aparna Balamurali said,
I could have got better exposure I think, met a lot of people physically but everything was virtual then due to covid. If we didn’t have the phase like Corona, probably, it could have been a game-changer. But I feel grateful that even after getting the OTT release, the kind of reach it got was really good. I’m taking the positive side of it.”

Aparna likes to model and pose for various designers and fashion magazines.
Aparna posing for a clothing brand in 2022

To my one and only…
To my Sudha ma’am…
Beyond words can express ❤️🙏🏼@Sudha_Kongara pic.twitter.com/KOBOxAnIv9
— Aparna Balamurali (@Aparnabala2) July 24, 2022