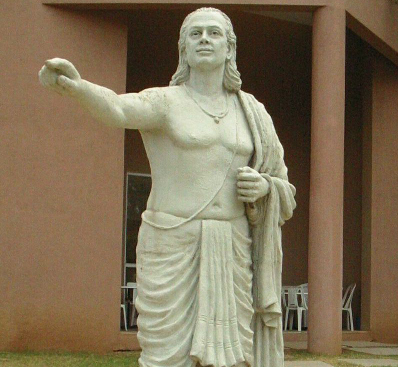 The death: 550
Work: Arithmetic
Aryabhata was one of the greatest astronomers and mathematicians of ancient times. His work in the field of science and mathematics still inspires scientists. Aryabhata was one of the first to use algebra (algebra). You will be surprised to know that he wrote his famous work ‘Aryabhatiya’ (book of mathematics) in the form of poetry. It is one of the famous books of ancient India. Most of the information given in this book is related to astronomy and spherical trigonometry. 33 laws of arithmetic, algebra and trigonometry are also given in ‘Aryabhatiya’. ( Aryabhatta Biography )
Today we all know that the earth is round and rotates on its axis and that is why night and day occur. In the medieval period, ‘Nicholas Copernicus’ proposed this theory, but very few people will be aware of the fact that about 1 thousand years before ‘Copernicus’, Aryabhata discovered that the Earth is round and its circumference is approximate 24835. Is miles. Aryabhatta proved the belief of Hindu religion of Sun and Moon eclipse wrong. This great scientist and mathematician also knew that the moon and other planets are illuminated by the sun’s rays. Aryabhata proved from his sources that a year consists of 365.2951 days, not 366 days.
early life | Aryabhatta Biography
Aryabhata has written his birthplace Kusumpur in his book ‘Aryabhatiya’ and the birthplace Saka Samvat 398 (476). With this information the year of his birth is undisputed but there is a dispute about the actual birthplace. According to some sources, Aryabhata was born in Ashmak region of Maharashtra and it is certain that at some point of his life he went to Kusumpura for higher education and lived there for some time. The seventh-century Indian mathematician Bhaskar has identified Kusumpura as Pataliputra (modern Patna), along with Hindu and Buddhist traditions. A great center of study, Nalanda University was established here and it is possible that Aryabhatta may have been associated with it. It is possible that Aryabhata lived there in the last days of the Gupta Empire. The Gupta period is known as the Golden Age of India.
Work
Aryabhata’s works come from the texts composed by him. This great mathematician composed texts such as Aryabhatiya, Dasgeetika, Tantra and Aryabhata Siddhanta. Scholars differ a lot about the ‘Aryabhata doctrine’. It is believed that the ‘Aryabhata doctrine’ was widely used in the seventh century. At present only 34 verses of this book are available and scholars have no definite information about how such a useful book has disappeared. ( Aryabhatta Biography )
Aryabhatiya
The Aryabhatiya provides a direct description of the work done by him. It is believed that Aryabhata himself would not have given it this name, but later commentators may have used the name Aryabhatiya. It is also mentioned by Aryabhata’s disciple Bhaskara I in his writings. This book is sometimes also known as Arya-Shata-Ashta (ie 108 of Aryabhata – the number of verses in his text). Aryabhatiya describes square root, cube root, parallel series and different types of equations. In fact, this book is a collection of mathematics and astronomy. The mathematical part of Aryabhatiya includes arithmetic, algebra, simple trigonometry and spherical trigonometry. It includes continuous fractions, quadratic equations, the sum of power series (tables of power series) and a table of sines. Aryabhatiya has 108 verses in total, as well as 13 introductory additions. It is divided into four terms or chapters:

Arya theory
Arya-siddhanta is a function above astronomical calculations. As mentioned above, this book is now extinct and all the information we get about it is either from the writings of Varahamihira, contemporary of Aryabhata or the works of later mathematicians and commentators such as Brahmagupta and Bhaskara I etc. From the articles. On the basis of whatever information is available to us about this book, it appears that this work is based on the old Surya Siddhanta and it uses the midnight-day calculation rather than the sunrise of Aryabhatiya. Many astronomical instruments are also described in this book. The main among these are the cone-machine, the shadow-device, possibly the angle-measuring device, the Dhanur-yantra / Chakra-yantra, a cylindrical stick Yasti-yantra, the Chhatra-yantra and the water watches.
A third book by him is also available, but it does not exist in the original form but in the form of an Arabic translation – Al Ntf or Al Nnf. This book claims to be a translation of Aryabhata’s book, but its actual Sanskrit name is unknown. It is noted by the Persian scholar and historian Abu Rehan al-Biruni.
Aryabhata’s contribution
Aryabhata has had a profound influence on the mathematics and astrology theory of India and the world. Aryabhata, who holds the most important place among the Indian mathematicians, has presented the principle of astrology and related mathematics in his famous book ‘Aryabhatiya’ in 120 Aryanchanda.
He represented the value of ‘pie’ more accurately than the great Archimedes in the field of mathematics, and for the first time in the field of astronomy it was declared that the Earth itself rotates on its axis.
The place-price points system was clearly present in Aryabhata’s works. Although he did not use any symbol to indicate zero, mathematicians believe that the knowledge of zero as a place holder for the power of ten was implicit in Aryabhata’s place-value numeral system, with a blank coefficient.
It is surprising and surprising that without the advanced tools of today, he discovered astrology about one and a half thousand years ago. As we have already mentioned, Aryabhata discovered the theory propounded by Copernicus (1473 to 1543 AD) thousands of years ago. In “Golapada”, Aryabhata first proved that the earth rotates on its axis.
According to this great mathematician the relation of circumference and diameter of a circle comes to 62,832: 20,000 which is pure to four decimal places. According to Aryabhata’s calculation, the circumference of the Earth is 39,968.0582 kilometers, which is only 0.2% less than its actual value of 40,075.0167 kilometers.
Оформить и получить займ на карту мгновенно круглосуточно в Москве на любые нужды в день обращения. Взять мгновенный кредит онлайн на карту в банке без отказа через интернет круглосуточно.