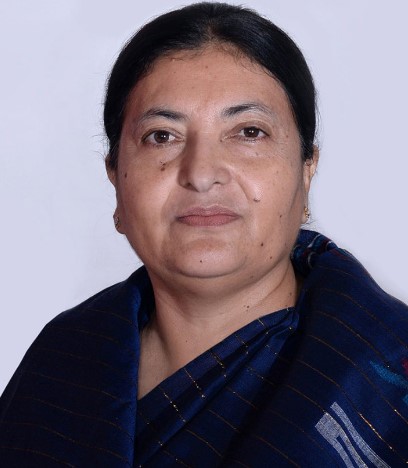 Bidya Devi Bhandari is a Nepali politician. In 2015, she hit the headlines when she was chosen as the second president of Nepal. Upon this, she became the first woman to hold the president’s office in Nepal. Prior to this, she served as the minister of defence and minister of environment and population, the vice-chairperson of the Communist Party of Nepal (Unified Marxist–Leninist), and the chairman of the All Nepal Women’s Association. Bidya Devi Bhandari served as the Minister of Defence of Nepal from 2009 to 2011. She served as the Minister of Environment and Population in 1997.

Bidya Devi Bhandari was born Bidya Pandey on Tuesday, 19 June 1961 (age 61 years; as of 2022) in Mane Bhanjyang, Bhojpur, Kingdom of Nepal (present-day Mane Bhanjyang, Ramprasadrai R.M., Bhojpur, Province No. 1, Republic of Nepal). Her zodiac sign is Gemini. She completed her primary school education at Behereshwar Primary School, Nepal. In 1979, she earned her SLC (School Leaving Certificate) at Bidhyodaya Vocational High School, Nepal. In 1980, she completed a bachelor’s in arts degree in Humanities at Tribhuvan University, Nepal. According to Bidya Devi Bhandari, she was the first person in her family who completed matriculation. In a media conversation, she revealed that her grandfather encouraged her parents to educate her. She said,
I happened to be a role model for the women in my village and it prompted other parents to send their daughters to school.”
Reportedly, her grandfather and uncles began teaching her political skills when she was seven years old. Her grandfather and uncles were associated with the Nepal Student’s Union and the ANNFSU as its members. Once, in a conversation with a media house, she recalled that she used to feel very bad for poor people when she was a child and often wished to eradicate this inequality from the country. She told,
I felt very bad when I saw some people begging for money, medicine or some old dresses to wear. I wondered why they were so poor and what was the cause of this inequality.”
Bidya Devi Bhandari joined the Coordination Committee (founded in 1975) when she was studying in eighth grade. Soon after joining this committee, she was given the responsibility by the head of the committee to distribute the party pamphlets in villages to warn the local landlords.

Bidya Devi’s grandfather’s name is Tilak Bahadur Pandey. Her grandfather was a social worker as well as a Pradhan Pancha of his village. Her father’s name is Ram Bahadur Pandey, and he was the headmaster at a local high school in Nepal. Her mother’s name is Mithila Pandey. She has two brothers, and the name of one of her brothers is Degendra Pandey.
Bidya Devi Bhandari with her brother
Her cousin, Gyanendra Bahadur Karki, is a noted Nepali politician.
Bidya Devi Bhandari’s cousin Gyanendra Bahadur Karki

In 1982, Bidya Devi Bhandari got married to Madan Bhandari who was a noted Nepali politician. Bidya Devi and Madan Bhandari met with each other two times before getting married to each other, once, in 1979 and again in 1980 in Bhojpur, while they were attending political party meetings.
An old picture of Bidya Devi Bhandari with her husband
Madan Bhandari passed away on 16 May 1993 in a car accident when he was on his way from Pokhran to Chitwan along with his three companions to attend a party meeting. According to some media sources, his car plunged into the Trishuli river mysteriously and all the passengers in the car died; however, the driver (Amar Lama) of the car managed to save himself. Three days after the accident, Madan Bhandari’s body was recovered by the police on the bank of the Narayani river. After ten years of the accident, the driver was murdered under mysterious circumstances. This incident mushroomed conspiracy theories in Nepal at that time.
A statute of Madan Bhandari in Nepal
Once, in an interview with a media house, Bidya Devi Bhandari disclosed that Madan Bhandari’s personality, political ideologies, and leadership qualities impressed her so much that it persuaded her to marry him. She further added in the same discussion that it was not a love-at-first-sight thing. She told,
It was not a love-at-first-sight kind of thing. I was nervous to be in front of him. His sharpness and his ability to present various issues with depth touched me. I was sure that he was a man with a difference but I did not know that he would one day acquire the position of general secretary of the CPN (UML).”
Bidya Devi Bhandari with her husband and two daughters
The couple has two daughters named Usha Kiran Bhandari and Nisha Kusum Bhandari. According to some media sources, one of her daughters is a medical practitioner and the other one works as a party worker for the Nepal political party CPN (UML).
President Bidya Devi Bhandari talks to her daughters as she returns from a temple in Kathmandu Valley, on the day of Maha Ashtami in 2016