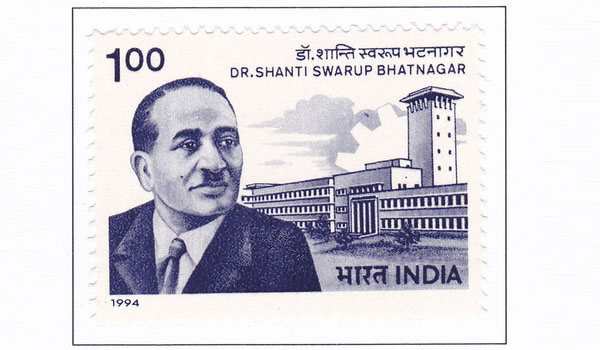 The death: 1 January 1955, New Delhi, India
Education: Doctorate in Science, University College, London, University of Punjab
Scope of work: Scientist, has made invaluable contribution in the establishment of national laboratories in India

Award: Padma Bhushan ‘(1954), OBE (1936), Knighthood (1941)
Dr. Shanti Swaroop Bhatnagar was a noted Indian scientist who played a major role in establishing national laboratories in India. Hence he is also called the father of “National Laboratories in India”. He was a professor of Rashayan Shastra for 19 years. Dr. Bhatnagar contributed significantly in the establishment of Council of Scientific and Industrial Research (CSIR) and was also the first General Director. He was also made the first chairman of the University Grants Commission (UGC).
The Council of Scientific and Industrial Research (CSIR) instituted the Shanti Swarup Bhatnagar Award in 1958 for his contribution in the field of science and research in India. This award is given to scientists who have made significant contributions in the field of science.
early life
Shanti Swaroop Bhatnagar was born on 21 February 1894 in a Hindu Kayastha family in Bhera in Shahpur district (now in Pakistan), British India. His father Parmeshwari Sahai Bhatnagar passed away when he was just 8 months, after which his childhood passed to his maternal grandfather’s house. His maternal grandfather was an engineer, so the trend of child peace became natural towards science and technology. Since childhood, he was fond of making toys, electronic batteries and wired telephones. He also got fond of poetry and poetry from his maternal grandfather’s house. He got his early education at Dayanand Anglo-Vedic High School in Secunderabad. In 1911, he joined the newly established Dayal Singh College, Lahore. Here he became an active member of ‘Saraswati Stage Society’. Bhatnagar had earned a good reputation as an artist here. He wrote a play called ‘Karamati’ in Urdu. The English translation of this drama earned him the ‘Best Drama’ award and medal of the year 1912 of ‘Saraswati Stage Society’.
Shanti Swarup Bhatnagar passed the Intermediate examination from Punjab University in the first class in 1913. After this, he enrolled in the Forman Christian College, Lahore, from where he completed his B.Sc. And in 1919, M.Sc. Passed the test of.
Higher Education and Elementary Research
Shanti Swaroop Bhatnagar got a scholarship from ‘Dayal Singh Trust’ to study abroad and he left for America (via England) but luck was a bit more and he could not get a seat on a ship going to America because the First World All of the ship’s seats were reserved for American forces in the wake of the war.
The good thing for him was that the trustee gave him Professor Frederick G., Professor of Rashayan Shastra at University College London. Granted permission to read under Donnan. In 1921, he also earned the degree of Doctor of Science (D.Sc.). During his stay in London, the Department of Scientific and Industrial Research also awarded him a fellowship worth £ 250 a year.
In August 1921, he returned to India and was appointed Professor (Professor) of Rashayan Shastra at the newly established Banaras Hindu University and taught for three years. He also composed the University Vice-Chancellor.
B.H.U. After spending almost three years in IA, Dr. Bhatnagar moved to Lahore where he was appointed Professor of Physical Chemistry at Punjab University and Director of the University’s Laboratories. This was the most important period of his scientific life during which he did fundamental scientific research. During this time he worked on emulsions, colloids and industrial chemistry, but his contribution in the field of magneto-chemistry was most significant.
In 1928, he along with KN Mathur invented the ‘Bhatnagar-Mathur Magnetic Interference Balance’. It was one of the most sensitive instruments to find the magnetic nature. It was performed at the ‘Royal Society’s Banquet’ in 1931. Later it was also produced by a British company.
After independence, Dr. Bhatnagar, along with Homi Jahangir Bhabha, Prashant Chandra Mahalanobis, Vikram Sarabhai and other scientists, was instrumental in formulating the science and technology infrastructure and policies in the country. He also guided and encouraged many young and promising scientists. These included Shyamdas Chatterjee, Shantilal Banerjee and Ashutosh Mukherjee. They c.v. on ‘Raman Effect’. Raman and K.S. Used to look at the work being done by Krishnan.
He served as Secretary in the Ministry of Education and was also the Education Advisor to the Government of India. He was instrumental in the formation and deliberation of the ‘Scientific Manpower Committee Report 1948’.
He did important work in the field of applied chemistry and was instrumental in the establishment of the ‘National Research Development Corporation’ (NRDC). NRDC The role is to bridge the gap between research and development. He played an important role in the enforcement of ‘Industrial Research Movement’ in the country.
In 1951, he set up a one-member commission to negotiate with oil companies to establish ‘oil refineries’ which resulted in the establishment of several ‘oil refineries’ throughout the country.
After the independence of the country, the Council of Scientific and Industrial Research (CSIR) was established in 1947 under the leadership of Shanti Swaroop Bhatnagar and was also made the first General Director of CSIR. Dr. Bhatnagar is called the ‘father of research laboratories’. He played an important role in establishing many large chemical laboratories in India. Dr. Bhatnagar established a total of twelve national laboratories in India, the major of which are as follows:

In view of his significant contribution to the development of science in India, after his death, CSIR announced the launch of ‘Bhatnagar Award’. The award is given to skilled scientists from every field of science.
The Government of India honored Padma Bhushan with Dr. Shanti Swarup Bhatnagar in the field of science and engineering in 1954.
The death
Dr. Shanti Swarup Bhatnagar died on 1 January 1955 due to a heart attack.
Оформить и получить займ на карту мгновенно круглосуточно в Москве на любые нужды в день обращения. Взять мгновенный кредит онлайн на карту в банке без отказа через интернет круглосуточно.