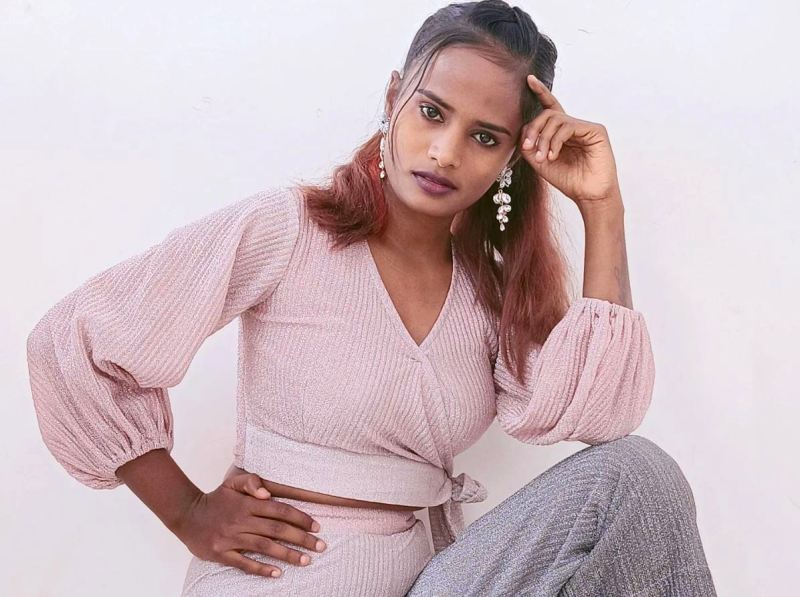 Faima Shiek is an Indian actress and TV personality who became popular in the Telugu entertainment industry after appearing in the shows Sridevi Drama Company and Jabardasth.

She hails from Hyderabad, Telangana.
Childhood picture of Faima Shiek

In July 2022, Faima Shiek’s co-actor Praveen proposed to her with a ring during the show Sridevi Drama Company. During an emotional speech, while explaining why he loved Faima, Praveen said “because achieved what she wanted.” Praveen talked about how Faima fulfilled the dream of her mother who wanted to buy her own house.
Praveen proposing to Faima Shiek on Sridevi Drama Company

Belonging to a humble family, Faima pursued various odd jobs like working in agricultural fields and hospitals, tailoring, and making beedis, to earn a living. In 2019, she gained recognition via the Telugu comedy show Pataas 2 on ETV Plus hosted by Sreemukhi and Ravi in which she performed with her partner Praveen.
Faima Shiek and Praveen on Pataas 2 (2019)
Later, she featured in the show Pove Pora hosted by Vishnupriya Bheemineni and Sudigaali Sudheer. In 2021, she appeared on the Telugu reality game show Sixth Sense Season 4 on Star Maa.
Faima Shiek with host Ohmkar on Sixth Sense
In December 2021, she made an appearance on the Telugu reality show Mayadweepam. In the children’s treasure hunt show, she was paired with Shukla.
Faima Shiek on the set of Mayadweepam (2021)
In 2022, she came into the limelight after appearing on the Telugu show Jabardasth on ETV. In the show, various standup comedians showcase their skills by performing hilarious sketches, comic acts, and entertaining skits. On the show, she was first a part of Avinash’s skits. Later, when Avinash entered the show Bigg Boss Telugu, Faima became a crucial part of the sketches of comedians Jeevan and Bhaskar in the show. Her on-screen chemistry with Emmanuel and others in the show was immensely appreciated.
Faima Shiek (right) on ETV’s Extra Jabardasth
In the same year, she gained popularity for appearing on the show Sridevi Drama Company on ETV in which she performed with Praveen
Faima Shiek and Praveen on Sridevi Drama Company
In 2022, she became a household name in Andhra Pradesh and Telangana when she appeared as a contestant on the reality TV show Bigg Boss (Telugu season 6) on Star Maa.
Faima Shiek’s promotional banner for (Bigg Boss 6 Telugu)
Besides that, she also runs a YouTube channel named Falaknama Faima on which she uploads her daily lifestyle vlogs. She started the channel in 2021.