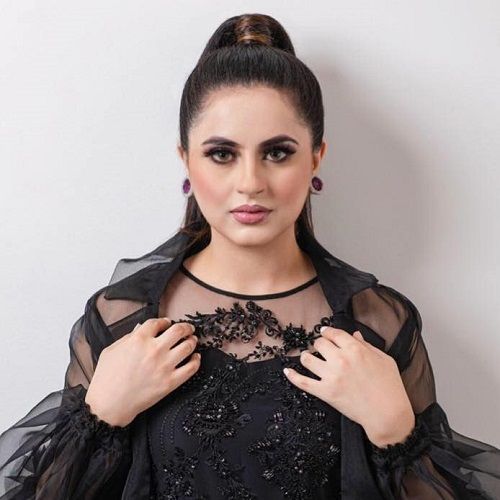 Fatima Effendi is a Pakistani TV actress and model. She played the role of Khushi aka Pagli in the Urdu TV drama ‘Kaash Main Teri Beti Na Hoti’ (2011).

She belongs to a Sindhi Muslim family. She is the descendant of Hassan Ally Effendi, founder of Sindh Madrassatul Islam which is the first school of Muslims in British India.

In 2010, while she was working in the Urdu TV drama ‘Larkiyan Muhally Ki,’ she met the Pakistani actor Arsalan Kanwar. While working together, they became friends, and soon, fell in love with each other.
Fatima Effendi with her husband
After dating for almost two years, the couple got married on 17 November 2012. In an interview, Arsalan talked about meeting Fatima for the first time. He said,
We met on the sets of our first drama together. Gradually I realized that we have a lot in common and I really liked her but she was very young at that time and I did not want to hurt her in any way. We were separated and out of touch for a long time after that. I backed out because I was not ready to get married. But when we were apart for a few days I realized that this is the girl I want to spend the rest of my life with.”
Fatima Effendi on her wedding day
The couple is blessed with two sons named Almir Kanwar (elder) and Mahbir Kanwar (younger).
Fatima Effendi with her husband and children

She belongs to the Effendi caste.

At the age of 8, she started working in TV commercials. In an interview, while talking about doing TV commercials, she said,
Since my mother was an actress, I have been doing work on and off for what seems like forever so I don’t remember if it was on my mind or not but I hated doing some of the commercials that were too childish for me since I wanted to be a heroine at that time. I used to cry but still did those embarrassing bubblegum ads because my mom wanted me to do them to gain confidence as I was an introvert in school.”
She has been featured in various print advertisements and TV commercials for brands like Genesis Talent and Sparkle Salt.