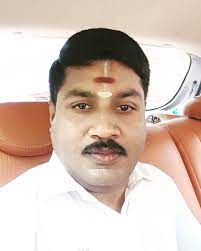 GP Muthu is an Indian YouTuber and TikTokker who became famous for appearing as a contestant in season 6 of Bigg Boss Tamil (2022).

Ganesan Pechi Muthu was born on Friday, 29 March 1985 (age 37 years; as of 2022) in Udankudi, Tuticorin, Tamil Nadu. His zodiac sign is Aries. In an interview, he revealed that he is a school dropout.

Muthu’s father’s name is Ganesan.
GP Muthu with his father

Before becoming a YouTuber, he joined his father’s jewellery shop when he was young. His jewellery business failed after which he became a carpenter, but unfortunately, even this business suffered losses during to the Covid-19 pandemic.

In 2020, he started making funny videos and posted 10 to 15 videos on TikTok regularly to remove stress from his life because of which he gained more than millions of followers. He usually posted comic videos in the southern dialect.

Reportedly, in 2021, he appeared in a film along with actress Sunny Leone.

Insulting comments on an actress

In 2020, Tamil actress Meera Mitun took to social media to inform that she would make a complaint against Muthu for making derogatory comments about her.

Usage of the wrong language

In 2021, Muthu attracted controversy when a person named M.M.K Muhaideen filed a complaint to the Superintendent of Police of Ramanathapuram district against Muthuin. In the complaint, he said that the videos posted by Muthu contained obscene language. In the complaint, he further added,
Students are supposed to spend more time in Internet to learn as Government has imposed a lockdown for school and colleges. Using the situation, a number of people such as G.P Muthu, Trichy Sadhana, Baby Surya, Chikka endra Chikkanthar are misleading innocent students by uploading videos talking obscene languages and making money out of it.”