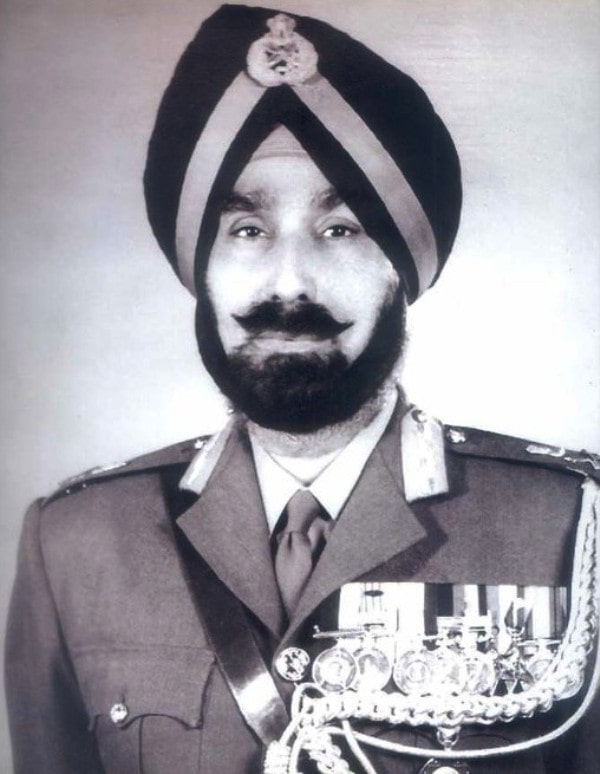 Lieutenant General Harbaksh Singh (1919-1933) was a senior officer of the Indian Army. He was a recipient of India’s third-highest gallantry award, the Vir Chakra, and is also known for playing a decisive role in the defence of Punjab during the 1965 India-Pakistan War. Lt Gen Harbaksh Singh died on 14 November 1999 in New Delhi, India.

Lieutenant General Harbaksh Singh was born on Wednesday, 1 October 1913 (age 86 years; at the time of death) in Badrukhan village, Sangrur, Jind State, British India (now Haryana, India). Harbaksh was born into a wealthy family. After completing his school studies at Ranbir High School, Sangrur, he enrolled at the Government College, Lahore, where he completed his higher education. Upon completing his graduation, Harbaksh Singh appeared for the entrance exam of the Indian Military Academy and joined the first batch of under-training officer cadets at the Indian Military Academy in 1933.

Early years after commissioning as an officer

Harbaksh Singh was commissioned in the British Indian Army on 15 July 1935 into the British Regiment of Argyll and Sutherland Highlanders, at Rawalpindi. During the British reign, there was a rule that all newly commissioned Indian officers would serve in an all-British Regiment for a few years before being sent to an Indian unit. With the Argyll and Sutherland Highlanders, he saw action at the North-West Frontier border. He also participated in the Second Mohmand Campaign of 1935. Upon completing his attachment with the Argyll and Sutherland Highlanders, on 19 August 1936, Harbaksh Singh joined the 5th Battalion of the 11th Sikh Regiment (5/11 Sikh) at Aurangabad. In 1937, he was made a platoon commander of a Signal platoon at the battalion headquarters. In 1938, when the entire Sikh battalion was moved to Razmak in the North-West Frontier Province (NWFP), he took charge as the Alpha Company’s commander.

Career during the Second World War

In April 1939, after Germany invaded Poland, Britain declared war on Germany which resulted in Japan, an ally of Germany, declaring war on Britain. In 1939, Harbaksh Singh’s battalion was ordered to move and deploy to the eastern front. The battalion made its way to the Presidency of Madras, where they boarded a ship and reached Kuantan, British Malaya (now Malaysia). The Japanese troops attacked Kuantan on 5 January 1942 and drove the British forces to Singapore. While withdrawing from the frontlines, Harbaksh Singh and his Alpha Company ran into a Japanese ambush in which he was severely wounded; however, he was evacuated by his men and was admitted to the Alexandra Hospital in Singapore, where he stayed till Singapore was captured by the Japanese forces in February 1942.

Taken as a Prisoner of War by the Japanese

On 15 February 1942, after the surrender of the British forces in Singapore, Harbaksh Singh was captured and taken as a Prisoner of War (PoW). At first, Harbaksh Singh was to be moved to the islands of Rabaul, in Papua New Guinea but the plan was changed, and he was sent to the Kluang Airfield, where he was handed over to the Imperial Japanese Army. He was then sent to the Kluang Labour Camp, a labour camp, where the Japanese troops forced the surrendered soldiers to work day and night. In the same camp, Harbaksh Singh’s elder brother, Lieutenant Colonel Gurbaksh Singh, was also held captive; however, later, Gurbaksh Singh joined the Indian National Army as a Commander. The conditions of the camp where Harbaksh was held were very poor as a result of which he suffered from Beri Beri and Typhoid. He stayed in the Kluang camp until the end of the Second World War and was sent back in September 1945.

Career after the Second World War

After returning to India from the Japanese captivity, Harbaksh Singh was admitted to the Military Hospital (MH) at Ambala, where he received medical treatment for the diseases he had contracted in the PoW camp. In April 1946, after recovering, Harbaksh Singh was sent for the Unit Commander’s Course (UCC) in Dehradun. After completing the course, he was posted to the 4th Battalion of the 11th Sikh Regiment (4/11 Sikh), as its Second-in-Command in Campbellpur (now Attock, Pakistan). In February 1947, he was selected for the first long course of Army Staff College in Quetta, Balochistan.

Post-independence career and the India-Pakistan war of 1947-48

Upon completing his Army Staff College course, he was appointed as GSO-1 (operations and training) of the Indian Army’s Eastern Command. In September 1947, Pakistani-backed infiltrators attacked and invaded Jammu and Kashmir. After independence, the 4/11 Sikh Regiment was renamed 1 Sikh, and the unit during the initial days of the 1947 India-Pakistan war was commanded by lieutenant colonel Ranjit Rai who was killed in action. After Ranjit Rai’s death, Harbaksh Singh, who was posted as the deputy commandant of the 161 Infantry Brigade, requested to take over the command of 1 Sikh; however, his request was rejected by the Indian Army. On 7 November 1947, he devised a plan for the Battle of Shelatang Bridge, which included 1 Sikh and 4 Kumaon. The Indian victory in the battle turned out to be a turning point of the entire war. On 12 December 1947, when Harbaksh Singh came to know that his unit, 1 Sikh, had suffered massive casualties while attempting to recapture the town of Uri from the hands of the Pakistani infiltrators, he volunteered to drop a rank to assume command of 1 Sikh. After assuming the command of 1 Sikh, he was asked to move his unit to Handwara district, where the unit under his command recaptured Pharikian ki Gali from the Pakistanis. In 1948, he was promoted to the rank of Brigadier and was given the command of the 163 Infantry Brigade, which captured the strategically important village of Tithwal.

After the end of the 1947-48 India-Pakistan War, Harbaksh Singh was appointed as the deputy commandant of the Indian Military Academy after which he was posted to the Western Command from where he was posted as the Director of the Infantry at the Army Headquarters, in New Delhi. In 1957, he was selected to attend a course at the Imperial Defence College (now Royal College of Defence Studies) in the United Kingdom. In January 1959, after the German Army was re-raised after the end of the second world war, Harbaksh Singh became the first officer of a foreign nation to be sent on an attachment with the German Army. After returning from his attachment with the German Army, Harabaksh Singh was posted as the General Officer Commanding (GOC) of the 27th Infantry Division and then as the GOC of the 5th Infantry Division. In July 1962, he was appointed as the Chief of Staff at the Western Command headquarters. He remained the chief of staff of the Western Command till October 1962.

On 20 October 1962, the Chinese People’s Liberation Army attacked and invaded the North-East Frontier Agency (NEFA) (now Arunachal Pradesh) and Eastern Ladakh. When the war between India and China broke out, Harbaksh Singh was moved from Shimla to Tezpur, Assam, where he assumed the command of the Indian Army’s 4 Corps also known as the Gajraj Corps. When the Chinese invasion was in full swing, Harbaksh Singh was replaced by Lt Gen BM Kaul as the 4 Corps’ commander. and he was sent to take over the command of the Indian Army’s 33 Corps in Shillong. In an article titled, Remembering Lt Gen Harbaksh Singh, Captain Amrinder Singh said,
After commanding the 5 Division and the 4 Corps for a while, during the Chinese operations of 1962 in India, where many soldiers believe that had he been allowed to command the Corps during the second phase of the battle by the Chinese which started on November 20, the situation would have been quite different in NEFA and the surroundings. Sadly for the Corps, their old GOC, General B.M Kaul, was sent back to command them, from a sick bed in Delhi, by DM Krishna Menon, the then Defence Minister. General Harbakhsh Singh was then given command of 33 Corps at Siliguri and he finally took over as the Western Army Commander in November 1964.”