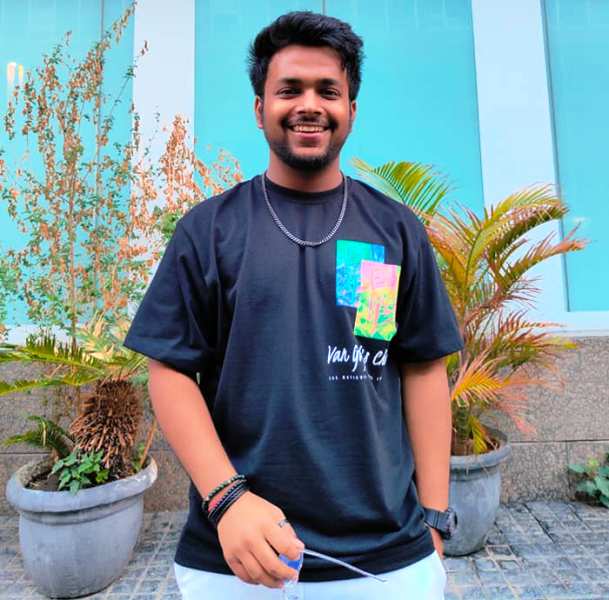 Harsh Mayar is an Indian actor. He won the National Film Award for Best Child Artist for his work in the 2011 film I Am Kalam.

Harsh Mayar was born on Sunday, 22 March 1998 (age 24 years; as of 2022), and he hails from Dakshinpuri in New Delhi, India. His zodiac sign is Aries.
Childhood picture of Harsh Mayar with his family
He attended Yogi Arvind Sarvodaya Bal Vidyalaya in Dehli. Growing up in a humble household, Harsh caught the acting bug at a very young age watching Bollywood films and TV shows. His parents couldn’t afford acting classes for him. Therefore, his maternal uncle enrolled him in an acting workshop at Shriram Bharatiya Kala Kendra. Always running from studies, Harsh grew up participating in various local plays in Mandi House, Delhi’s own Broadway. While recalling his initial days in theatre, in an interview, he said,
Firstly, I worked at the backstage. In my first stage show, I was given the role of a monkey. That was funny and exciting too. Even my mother was shocked to see me.”
Later, he relocated to Mumbai, Maharashtra.

Harsh’s father, Ashok, runs a tent contracting service, setting up tents for small functions. His mother’s name is Reeta. He has a younger brother, Chandan.
Harsh Mayar with his mother
Harsh Mayar’s parents

At the beginning of his career, he worked as an actor at the performing arts theatre Shri Ram Centre in New Delhi. He earned immense appreciation for playing the role of Annant in the play Paighamber in which he shared the stage with veteran actors Tom Alter and Amit Behl.
Harsh Mayar in a play sharing the stage with actors Tom Alter and Amit Behl in the play ‘Paighamber’

Harsh Mayar made his debut with the Indian Hindi-language 2011 children’s film I Am Kalam in which he played the protagonist Chhotu (aka Kalam). Produced by the non-governmental charity Smile Foundation, the film follows the story of a poor boy Chotu, who forms an unlikely and unstable friendship with the lonely son of a nobleman. The film earned various accolades and catapulted Harsh Mayar to fame. He was also nominated for the Colors Screen Awards for Best Child Artist (2012) for his role as Chotu.

In the 2014 Indian Hindi-language thriller film Chaarfutiya Chhokare, he played the role of Awdesh. The film follows an NRI Neha Malini who returns to India to establish a school in Bihar. As she meets three boys, Awadhesh, Hari, and Gorakh, who want to join the school, she slowly starts discovering the hardships, obstructions, and risks awaiting her in the seemingly serene village. In 2018, he appeared in the Bollywood film Hichki as Aatish, one of the 9F students who come from a nearby slum and were admitted to St. Notker’s School to fill the government-prescribed quota for the underprivileged.
Harsh Mayar as Aatish in Hichki (2018)
In 2018, he appeared in the Indian-American film ‘Nine Hours in Mumbai’ in which he played the role of Taru.

In 2014, he made his television debut when he appeared as a Bully in an episode of Channel V’s show Gumrah: End of Innocence. In 2016, he starred in a 78-episode action-drama series titled AdhaFULL, which aired on Doordarshan National. In the show, he played the role of Adrak, one of the three teenagers who are best of friends who form a gang called Aadha Full to solve mystery and crime cases that occur in their town, Badlapur.
Harsh Mayar as Adrak in AdhaFULL (2016)
Other TV shows in which he appeared include Kyunki… Jeena Isi Ka Naam Hai.

In 2020, he played the lead role of Manoj Bhardwaj in the mini-series Overtime. In the series, two IT employees, Manoj and Ramya, face everyday problems during an alien invasion, which leaves them in absolute boredom with no food and electricity.

After playing the role of Rocky in the 2021 film The Tenant, Mayar appeared in the web series Gullak. The role earned him a nomination in the category of Best Actor – Popular at the ITA Awards 2019.

In 2015, he starred in the Indian short film Untitled: The Words Left Unsaid in which he played the role of Nitin.
Untitled The Words Left Unsaid (2015)
In 2017, he received a Certificate of Excellence as an Actor at the 7th Dada Saheb Phalke Film Festival for the Indian short film Porphessnal. In 2019, he played the role of Karun Nair in the TVF’s Qtiyapa’s video titled Padh Le Basanti.