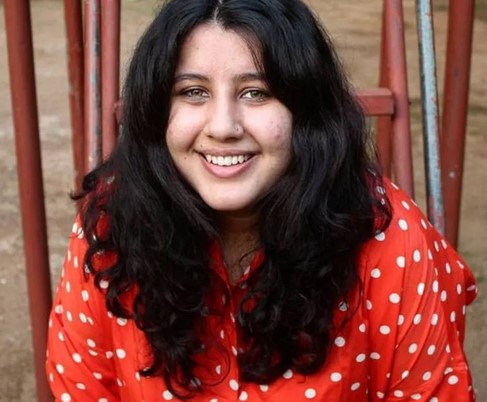 Jhanak Shukla is an Indian lifestyle blogger and former Indian child artist. She is best known for her 2003 serial Karishma Kaa Karishma in which she appeared in the lead role as Karishma.

Jhanak Shukla was born on Wednesday, 24 January 1996 (age 26 years; as of 2022) in New Delhi, India. Her zodiac sign is Aquarius. Soon after completing her school education, she joined Bhavans College, Mumbai, Maharashtra to pursue a bachelor of arts (B.A.) degree in History. She later completed her Master of Business Administration (MBA) at NMIMS Global, Mumbai, Maharashtra and earned a master’s degree in Ancient Indian history research and Archaeology from Deccan College Post-Graduate and Research Institute, Pune, Maharashtra. At the age of six, she, along with her family, shifted to Mumbai. Her father and mother met in 1992 on the sets of the serial Tanhai, which was telecasted on Doordarshan, and later, got married.
A childhood picture of Jhanak Shukla

Jhanak Shukla is not married.

Jhanak Shukla is in a relationship with Swapnil Suryawanshi for a long time.

Jhanak Shukla marked her acting debut with the Bollywood film Kal Ho Na Ho in 2003 along with Indian actors Shah Rukh Khan, Saif Ali Khan, and Priety Zinta. She played the character of Jenny Kapur’s (Jaya Bachchan) adopted daughter, Gia Kapur.
Jhanak Shukla in a still from the film Kal Ho Na Ho
She then appeared in the film Deadline: Sirf 24 Ghante in 2006. In this film, she played the role of Anishka Goenka, a kidnapped daughter of Rajit Kapoor and Konkona Sen Sharma. The film also starred the late Indian actor Irrfan Khan.

In 2006, she made her acting debut in the Hollywood film One Night with the King.

In 2000, she worked as Princy in the television serial Son Pari. In 2002, she worked in a Malayalam serial Aalipazham in which she played the role of a dumb girl. The serial was filmed in Trivandrum, and she used to travel to Trivandrum for the shooting. In 2003, she was cast in the Karishma Kaa Karishma, which was a remake of the 1980s American TV series Small Wonder in the lead role as Karishma.
Jhanak Shukla in a still from the television serial Karishma Ka Karishma in 2003
She then appeared in the show Hatim as little Jasmine. In 2012, she appeared in a small role in an episode of a reality-based crime thriller show ‘Gumrah: End of Innocence.’

At the age of five, she worked in the advertisement for ICICI. According to Jhanak, she was offered an advertisement by the director Pradeep Sarkar who saw Jhanak with her mother, Supriya Shukla, during Supriya’s shooting for commercials.

Once, Jhanak Shukla worked on a music video with Parikrama (band).

Apart from television serials, she also appeared in many short films such as Bol Ke Lab Azaad Hain Tere, Father’s Day Tribute, Maa Hoon Main, and U-Turn produced and directed by her parents in 2019.
The poster of the short film U-Turn

In February 2022, she began working as an Art Gallery Manager at ‘Fidelitus Gallery’ in Bengaluru, Karnataka and worked there till May 2022. In July 2021, she established an organisation named Roomaal and started producing and selling handkerchiefs, organic soaps, quirky bookmarks, and face masks.