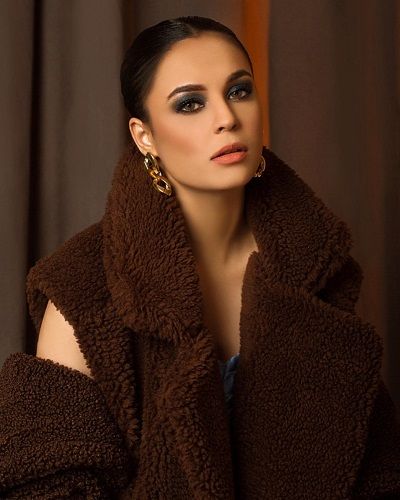 Mahenur Haider Khan is a Pakistani model, TV & film actress, and entrepreneur. She came into the limelight with her role as Muskaan in the Urdu TV drama ‘Aulaad’ (2020), which aired on ARY Digital.

Mahenur Haider Khan or Mah E Nur Haider was born on Thursday, 14 September 1995 (age 27 years; as of 2022) in Lahore, Pakistan. Her zodiac sign is Virgo.
Mahenur Haider Khan’s childhood picture with her mother
She did her graduation in visual communication design at Beaconhouse National University (BNU), Lahore, Pakistan. In an interview, while talking about her studies, she said,
The foundation year of my studies was very tough, so I took a break and focused on it. During the second year, I would work on weekends but would never take an off from university. I would submit my assignments and never let my work and university life muddle up.”
Mahenur Haider Khan’s picture from class 8

Mahenur has worked as a swimming instructor and marketing manager. In an interview, she shared that she started working at a very young age as she could not sit idle. She said,
I could never sit idle and would always keep doing something or the other. I have done a lot of internships, designed clothes, been a teacher’s assistant and had the experience of public dealing ever since I was 15. My work has always made me more confident and helped me throughout.”

At the age of 17, she started her modelling career. Her first modelling project was with the Pakistani visual artist Hamza Ali Butt for an editorial shoot. Soon, she became a popular face in the Pakistani modelling industry. She then did fashion shoots for various brands like Bareezé, Kayseria, Alkaram Studio, Shoe Planet, and The Closet.
Mahenur Haider Khan in a print advertisement
Mahenur has appeared in TV commercials for various brands like Sprite and Starz Play.

Mahenur made her TV drama debut with the Urdu drama ‘Aulaad’ in which she played the role of Muskaan. The drama was aired on ARY Digital.
A still of Mahenur Haider Khan from the TV drama Aulaad
She then acted in ARY Digital’s Urdu dramas like ‘Ishq Hai’ (2021) and ‘Betiyaan’ (2022).
Betiyaan (2022)