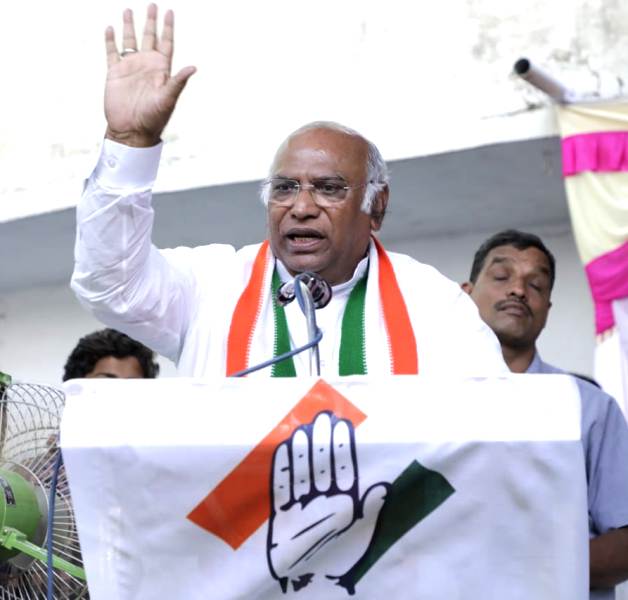 Mallikarjun Kharge is an Indian politician and member of the Indian National Congress. He became a Member of Parliament, Rajya Sabha on 16 February 2021. Previously, he served as the Minister of Railways and Minister of Labour and Employment in the central government and Leader of opposition in the Karnataka Legislative Assembly.

Mapanna Mallikarjun Kharge was born on Tuesday, 21 July 1942 (age 80 years; as of 2022) in Warwatti, Bidar, Hyderabad State, British India. At 7, Kharge and his family were forced to flee from their native village due to communal riots in which he lost his mother. Thereafter, the family settled in Gulbarga (now Kalaburagi). He attended Nutana Vidyalaya, Gulbarga till 10th standard. He pursued a Bachelor of Arts at Government Arts and Science College, Gulbarga, Karnataka. At college, Kharge plunged into politics as a student leader when he became the General Secretary & Vice President of the student’s union (1964–1965 & 1966–1967). He represented his college and university in hockey tournaments. Thereafter, he obtained a bachelor’s degree in law from Seth Shankarlal Lahoti Law College, Gulbarga. He practised law for a short while before entering active politics.

His father’s name is Mapanna Kharge, and his mother’s name is Saibavva Kharge. He lost his mother when he was seven in the communal riots following which the family was forced to flee from their village, Warwatti, and settle down in Gulbarga.

On 13 May 1968, he got married to Radhabai Kharge. Together, they have 3 sons and 2 daughters. His son Priyank Kharge is an MLA and a former minister. His other son’s name is Rahul Kharge. One of his daughters’ names’ is Priyadarshini Kharge; she is a doctor.
Mallikarjun Kharge and his wife, Radhabai Kharge
Priyank Kharge with his wife, Shruthi Kharge

Mallikarjun Kharge follows Buddhism. He is also a staunch follower of B.R. Ambedkar and said that Ambedkar’s monumental work “The Buddha and His Dhamma” gives us a better understanding of Buddhism.

Mallikarjun Kharge is a Dalit. Previously referred to as untouchable, Dalits belong to the lowest stratum castes i.e., scheduled castes in India.

He started his legal practice as a junior in Justice Shivaraj Patil’s office and fought cases for labour unions early in his legal career. In 1969, he worked as a legal advisor for the trade union of MSK Mills and other industrial workers and fought for their rights.

In 1972, he contested and won the Gurmitkal Assembly seat defeating the independent candidate Murtheppa by 9440 votes. From 1976 to 1978, he served as a Minister of State for Primary and Secondary Education. In 1973, he became the Chairman of the Municipal Finances Enquiry Committee (Octroi Abolition Committee) which went into the question of reviving the economy of the municipal and civic bodies in Karnataka. Based on its report, the then Devaraj Urs government abolished the levy of octroi at multiple points.
Mallikarjun Kharge with Karnataka CM Devraj Urs

In 1978, he contested and won the Gurmitkal Assembly seat defeating the JNP candidate G.Mahadevappa Tamanna by 16,599 votes. In 1979, he became the Cabinet Minister of Rural Development & Panchayati Raj. From 1980 to 1983, he served as a Cabinet Minister of the Revenue Department in the Gundu Rao Cabinet.

In 1983, he contested and won the Gurmitkal Assembly seat defeating the JNP candidate B. S. Gajanana by 16,143 votes. Thereafter, he was elected as the Secretary of the Karnataka Congress Legislature Party in the state assembly.

In 1985, he contested and won the Gurmitkal Assembly seat defeating the JNP candidate B. S. Gajanana by 17,673 votes. Thereafter, he was appointed as the Deputy Leader of Opposition in the state assembly.

In 1989, he contested and won the Gurmitkal Assembly seat defeating the JD candidate Arvind Guruji by 19,969 votes. From 1990 to 1992, he served as the Cabinet Minister for the Revenue department and Rural Development and Panchayati Raj.

In 1994, he contested and won the Gurmitkal Assembly seat defeating the JD candidate K.B. Shanappa by 19336 votes. From 1992 to 1994, he served as the Cabinet Minister for the Department of Cooperation and Medium and Large Industries. From 1996 to 1999, he served as the leader of the Congress Legislature Party and Leader of Opposition in the state assembly.

In 1999, he contested and won the Gurmitkal Assembly seat defeating the JD(U) candidate Ashok Guruji by 47,124 votes. From 1999 to 2004, he served as the Cabinet Minister of the Home Department in the S. M. Krishna Cabinet. He also held charge of the Infrastructure Development and Minor Irrigation in the state assembly.

In 2004, he contested and won the Gurmitkal Assembly seat defeating the JD(S) candidate Akaashi Basavaraj by 18,547 votes. From 2004 to 2006, he served as the Cabinet Minister of Water Resources and Transport in the Dharam Singh-led coalition government.

In 2008, he contested and won the Chittapur Assembly seat defeating BJP candidate Valmiki Kamalu Nayak by a margin of 17,442 votes. From 2008 to 2009, he was the Leader of the Congress Legislature Party and Leader of Opposition in the state assembly.

In 2014, he contested from the Gulbarga Lok Sabha constituency and won the seat defeating the BJP candidate Revunaik Belamgi by a margin of 74,733 votes. Thereafter, he became the Leader of the Congress Parliamentary Party in Lok Sabha. On 13 June 2014, he became a Member of the Business Advisory Committee. On 1 September 2014, he was appointed as a Member of Standing Committee on Home Affairs. He became a Member of Joint Parliamentary Committee on Maintenance of Heritage Character and Development of Parliament House Complex on 8 October 2014. Apart from that, he has served in various positions including  Member of National Committee (NC) for commemorating the 125th Birth Anniversary of Pandit Jawaharlal Nehru (20 October 2014), Member of General Purposes Committee (29 January 2015), Member of Consultative Committee, Ministry of Defence (29 January 2015), Chairperson of Public Accounts Committee (1 May 2017), and Member of Committee on Budget of Lok Sabha (1 May 2017)

In 2019, he suffered his first electoral loss when was defeated by BJP’s Umesh Jadhav in the Gulbarga Lok Sabha constituency by a margin of 95,452 votes.

Note: The given estimates of moveable and immovable assets are as per the financial year 2017-2018.