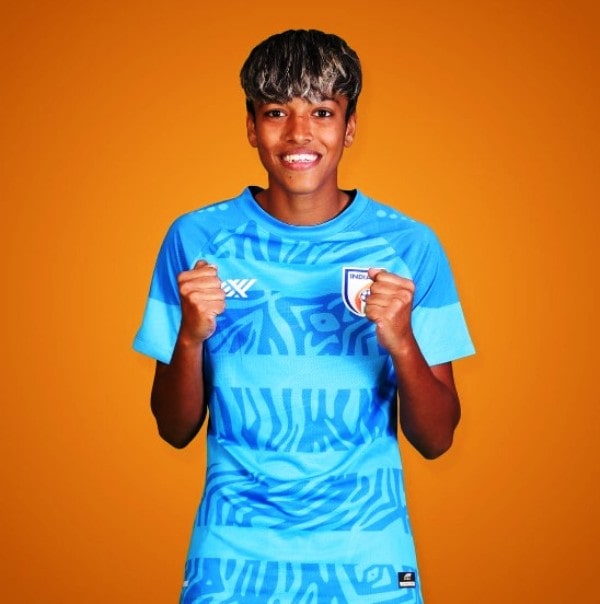 Manisha Kalyan is an Indian football player. In August 2022, she made headlines after becoming the first Indian woman footballer to take part in UEFA European Women’s Champion League.

Her father, Narinder Pal, is a businessman. Her mother, Rajkumari Pal, is a homemaker. Her elder sister, Sonam Pal, is a security guard.
Manisha Kalyan’s father, mother, and elder sister

Manisha Kalyan’s football journey began when she was thirteen years old. According to Manisha, she was spotted playing football by her Physical Education (PE) teacher Brahmjit Singh, who encouraged her to pursue a career in football. Talking about the event, during an interview, Brahmjit Singh said,
Manisha’s footwork was amazing. I convinced the principal to meet her parents. Her father was happy to hear about her talents and permitted me to train her.”
After Brahmjit Singh convinced Manisha’s parents, she started practising football and also represented her school’s football team at several regional and state-level tournaments in Punjab. While pursuing her education, she played the Oorja Cup, where she represented the Border Security Force’s (BSF) team. After the tournament, an officer of the BSF noticed her performance and asked her if she was interested in playing for the Mumbai-based Kankere Football Club. Talking about the incident, she said,
When I played Oorja Cup for Border Security Force, an officer asked me whether I could play for Mumbai’s Kenkre FC in the Indian Women’s League (IWL). I said I want family’s permission.”
In 2017, Manisha Kalyan joined Madurai-based Sethu Football Club, where she participated in the 2018 Indian Women’s League (IWL) and played a vital role in securing the club’s victory at the tournament. In the same year, she was drafted into the U-17 Indian National football team. In July 2018, Manisha Kalyan represented India at the BRICS Cup, which was held in South Africa. During the tournament, her performance was noticed by Kerala-based Gokulam FC during a match against the Chinese team. In 2018, after BRICS Cup, Manisha Kalyan was drafted by Gokulam FC. Later, in the same year, she played for the Indian U-18 team and represented India at the South Asian Football Federation (SAFF) Women’s Championship. There, the Indian team defeated Bhutan by a margin of 4-0. In 2019, she represented Gokulam FC in the Indian Women’s League (IWL), where she scored a total of three goals throughout the tournament. In October 2018, she represented India at the U-19 Asian Football Confederation (AFC) Women’s Championship, where she scored a hattrick against Pakistan. In the tournament, India defeated Pakistan by a margin of 18-0 goals. In 2021, Manisha Kalyan represented India in football matches against UAE, Bahrain, and Jordan.
Manisha Kalyan in a match against the Jordanian football team
In November 2021, she represented India in the International Football Tournament of Manaus. There, the Indian team was defeated by Brazil by a margin of 6-1. Manisha, in the match against Brazil, managed to score one goal. After the match, during an interview, Manisha said,
The South Americans were a bit taller, that is all. When it comes to fitness, strength and stamina, we can match anyone. Earlier, we used to think that we are physically weak but now we’re much better and aren’t afraid of any team. Skill-wise, I feel we are a bit lacking in our basics like first touch, mis-passes, but we’re all working on it together and feel confident.”
Manisha Kalyan in a match against the football team of Brazil
In 2022, she represented Gokulam FC at the Indian Women’s League (IWL) and won an award. In 2022, Manisha Kalyan left Gokulam FC to join Cyprus-based Apollon Ladies FC. She became one of the four Indian women football players to have been drafted by an international football club.
Manisha Kalyan during the signing of her contract with Apollon Ladies Football Club
On 22 August 2022, she became the first Indian footballer to have played at the UEFA European Women’s Champion League.
Manisha Kalyan kicking a football during her match at UEFA European Women’s Champion League