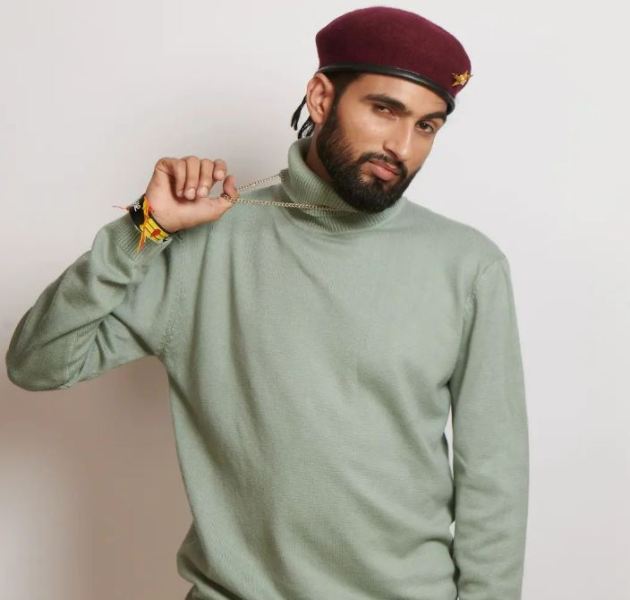 MC Square is an Indian rapper, lyricist, and composer who became well-known among youngsters after his appearance in a rap/hip-hop talent hunt show ‘MTV Hustle 2.0’ (2022). MC Square’s fine performances led him to win the show.

Abhishek Bensla (also spelt as Bainsla)/ Lambardar popularly known by his stage name MC Square was born on Sunday, 20 September 1999 (age 23 years; as of 2022) in Bhavana, a village located in Palwal district in the state of Haryana, India. Reportedly, he grew up in Faridabad, Haryana. He holds a Bachelor of Technology degree in Civil Engineering.

Abhishek Bensla belongs to a farmer’s family in Haryana.

His father’s name is Ashok Lambardar.

Reportedly, after pursuing his Bachelor of Technology degree in Civil Engineering, Abhishek Bensla worked as an administrative in-charge in a college for almost six months.

According to MC Square, he initially worked as a choreographer and would often choreograph for weddings and visit academies to teach.

According to the sources, Abhishek was inspired by ‘Ragini,’ a folk song that belongs to the state of Haryana.

A Kick-Start of The Journey

Reportedly, Abhishek started his career in rapping in 2016. In an interview, he spoke about the initial days of his career and said that he used to write poetry and gazals. Some sources claim that he was insisted by his friends and family to start giving beats to his poems.

MC Square – A Connection With Einstein’s Theory of Relativity

According to Abhishek Bensla, he was introduced to ‘MTV Hustle 2.0,’ an Indian rap/hip-hop reality show, by one of his friends ‘Himanshu Bhatt. Abhishek gave it a try. He got a call from the team of “Hustle” and went for the auditions in Delhi. While talking about his introduction to the show, Abhishek said,
My friend Himanshu Bhatt introduced me to HUSTLE 2.0, but I was not sure because I thought all these reality shows were scripted, but then I got a call from the crew of ‘Hustle’ for Delhi auditions and so here I am.”

In 2022, Abhishek Bensla entered the rap/hip-hop reality show and won the hearts of the judges – – and the audience by giving great performances, which were appreciated by many famous personalities including Badshah and Virat Kohli. MC Square was announced as the winner of the show.
MC Square performing ‘Chehre’ on the show ‘MTV Hustle 2.0’ (2022)