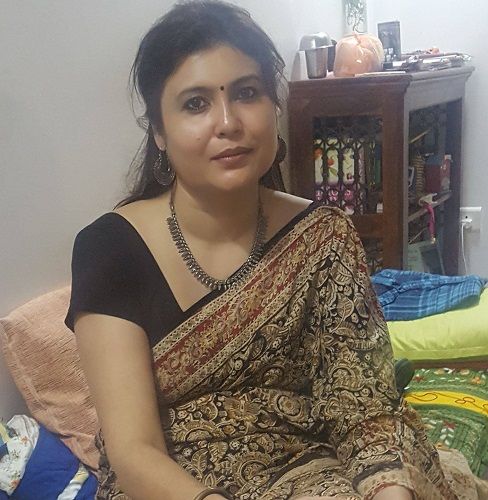 On 24 May 1993, Mridula met Pankaj for the first time at the wedding of her elder brother, who is married to the sister of Pankaj Tripathi. In an interview, while sharing the memories, she said,
It was my elder brother’s Tilak (engagement ceremony). I was on my way to a tiny room on the terrace to get dressed when this boy with hazel eyes, brown hair and a beard crossed me. Those eyes would go on to follow me during the entire function.”

At that time Mridula was in class 9, and Pankaj was in class 12. They then became friends, and soon, fell in love with each other. In an interview, when Pankaj was asked about his first meeting with Mridula, he said,
My sister was getting married. But her in-laws wanted to get a toilet built before my sister came. This was long before ‘Toilet Ek Prem Katha’. My friend went to his in-laws’ house to see what repair work was being done. He saw a girl there and came and told me about her. She said that she is very beautiful. Walks like a deer. I heard his compliments and was lost. I married her after 11 years. We both just used to see each other from 1993 to 2004. At that time I used to go to drama school. Those times were very different to me because there were no mobile phones at that time. The letter could not be written because it seemed that no one in the house could open it and read it. When I went to NSD, there was a phone and there was a landline in his house. We decided to talk everyday at 7.30 am and at 8:00 pm.”
An old picture of Mridula Tripathi and Pankaj Tripathi
After completing her post-graduation, Mridula shifted to Delhi from Kolkata to work as a teacher. At that time, Pankaj was also in Delhi to pursue an acting course at the National School of Drama. In an interview, Mridula shared that once her parents were looking for a boy for her marriage as they were not aware of Mridula and Pankaj’s relationship. She said that Pankaj also accompanied her sister and brother-in-law to the boy’s home. She said,
Pankaj accompanied my brother and sister-in-law to the prospective groom’s place. He came and told me that it was a good match for me and I would surely get much of ‘bhautik sukh.’ I did not know so much Hindi back then and asked what that meant, and he said ‘material happiness.’ That’s when I felt that I was losing something very precious. Only I know the lengths that I’d gone to break that marriage. And now the most important dilemma was communicating this news to Pankaj.”
After dating for a few years, the couple got married in 2004.
Mridula Tripathi and Pankaj Tripathi’s wedding picture
They then shifted to Mumbai as Pankaj wanted to pursue his career in acting in Mumbai. During Pankaj’s struggling days, Mridula used to earn money and Pankaj used to cook food at home. Pankaj has always praised his wife Mridula for always supporting him. In one of his interviews, he said,
If you ask me about my struggle, I don’t have any sad details like sleeping on a footpath or starving for days. That’s because my wife, Mridula, had taken over the entire responsibility of the house. In fact, I tell everyone that she is the man of the house.”