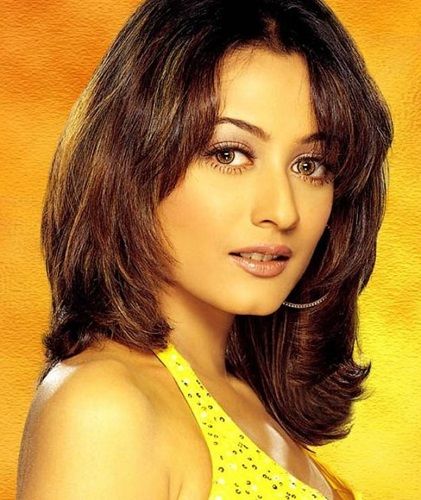 Namrata Shirodkar is a former Indian actor and model. In 1993, she won the beauty pageant Femina Miss India.

Namrata Shirodkar was born on Saturday, 22 January 1972 (age 50 years; as of 2022) in Mumbai. Her zodiac sign is Aquarius.
Namrata Shirodkar’s childhood photo
She did her graduation from The Mithibai College of Arts, Chauhan Institute of Science & Amruthben Jivanlal College of Commerce and Economics, Mumbai.

In 2000, while shooting for the Telugu film ‘Vamshi,’ she met the South Indian actor Mahesh Babu, who is three years younger than her. While working on the film, they became good friends, and after completing the shooting of the film, the couple started dating.
Namrata Shirodkar with her husband, Mahesh Babu
After dating for almost five years, the couple got married on 10 February 2005 at the JW Marriott Mumbai. Before her marriage, she completed shooting of all her films as it was Mahesh’s will to get married to a girl who was not working.
A collage of Namrata Shirodkar and Mahesh Babu’s wedding pictures
On 31 August 2006, the couple was blessed with a son named Gautam Ghattamaneni. After three years of their marriage, the couple had a rough patch in their marriage. Namrata even left Mahesh’s house and shifted to her parents’ home in Mumbai. Later, the couple sorted the matter and Namrata returned to Mahesh’s home.  In an interview, while talking about it, Namrata said,
Three years post-marriage was difficult for Mahesh and me. He was on a long career break, I lost my parents, he lost his granny. Plus, he was in this whole dilemma of what movie to sign next. But that period made us stronger as a couple, and as individuals. Our foundation today is more solid, we became one strong nuclear unit. I look back at all of it as a blessing.”
On 20 July 2012, they welcomed their daughter Sitara Ghattamaneni.
Namrata Shirodkar with her children

While Namrata was pursuing her modelling career, she started dating an Indian restaurateur named Deepak Shetty. The couple dated for more than nine years. Reportedly, they were in a live-in relationship for a few years and were planning to tie the knot, but later, the couple parted ways. In an interview, while talking about her relationship with Deepak, Namrata said,
There was just one time when I let my personal life overwhelm my professional one, and that cost me dearly. The relationship began before the Miss India contest, and lasted nine years. But, it wasn’t meant to be. There was a void in my life after that, but I moved on. And we will always wish each other well.”
She added,
You know, Aishwarya and I started our careers together. But she stayed on track, while I was diverted by this personal relationship, and it made me less ambitious. But I’m not bitter about anything. Perhaps, because I’m practical by nature, I don’t dwell on things. My sister Shilpa helped a lot too. She joined the industry at 14. She knew the importance of being professional and punctual. She told me to accept that dreams change, people change, but work is constantly fulfilling. And I’m happy, particularly now that the industry is sitting up and noticing me once again.”
Later, Namrata said that she had no ill feelings for Deepak, and on his demise, Namrata and her sister Shilpa went to his home to give condolence to his family.

In 1999, while the Indian director-actor Mahesh Manjrekar was working on his directorial debut film ‘Vaastav: The Reality,’ he met Namrata who was the female lead actress in the film. The duo became good friends while shooting for the film. Reportedly, they started dating each other and even started living together. At that time Mahesh was already married to Medha Manjrekar. According to the sources, Namrata and Mahesh Manjrekar’s relationship did not last long, and the couple parted ways.
Namrata Shirodkar with his rumoured ex-boyfriend Mahesh Manjrekar

Namrata started her career as a model. When she was 15 years old, her mother (a former Indian model) introduced Namrata to the popular Indian fashion photographer Gautam Rajadhyaksha, who did a photoshoot with Namrata. After watching her photos, the Indian fashion designer Hemant Trivedi asked her to walk the ramp for one of his fashion shows. She accepted the offer, and then she worked as a model in many fashion shows.
An old photo of Namrata Shirodkar with Aishwarya Rai in a fashion show
She has been featured in various print advertisements.
Namrata Shirodkar in a print advertisement
Namrata has also appeared in TV commercials for brands like Dabur Anmol Oil and Country Delight.

In 1993, she participated in the beauty pageant Miss India and won the title. In the final round, the contestants Namrata, Pooja Batra (actor), and Karminder were asked a common question by the host of the show Archana Puran Singh. Archana asked,
Who came first, the chicken or the egg?”
Namrata and Karminder replied ‘Chicken’ whereas Pooja said,
Who cares? As long as they are both useful.”

Later, the judges announced Namrata as the winner, Karminder as the first runner-up, and Pooja Batra as the second runner-up. On winning the pageant, Archana asked Namrata how she felt on winning. Namrata replied,
I feel great, I don’t know how to react. I just feel overwhelmed… First of all I will groom myself better to attend the Miss Universe contest in Mexico. Then I will put myself to some use for my country.”
Namrata Shirodkar being crowned as Miss India (1993)
In the same year, she represented India in the Miss Universe contest and finished in 5th place.
Namrata Shirodkar in the Miss Universe contest (1993)
In the question round, she was asked if she would love to live forever, to which she replied,
I don’t want to live forever as I believe no one can live forever.”

The judges left unimpressed by her answer, and she could not make it to the Top 3 contestants. She represented India at the Femina Miss India Asia Pacific in 1993. She stood first runner-up in the pageant, and she also won Best in Evening Gown in the sub-contest of the beauty pageant.

Accused of being Involved in a Drug Case

In 2020, after the demise of the Indian actor Sushant Singh Rajput, an investigation was carried on by the Narcotics Control Bureau, Mumbai. During the investigation, in a leaked chat of Jaya, former talent manager of Sushant Singh Rajput, Namrata’s chats were recovered. Reportedly, in the chat, Namrata had written,
You have promised me to provide a good MD in Mumbai. Let’s party together when I get the MD.”
As soon as the news went viral in the media, people started brutally trolling her on various social media sites.