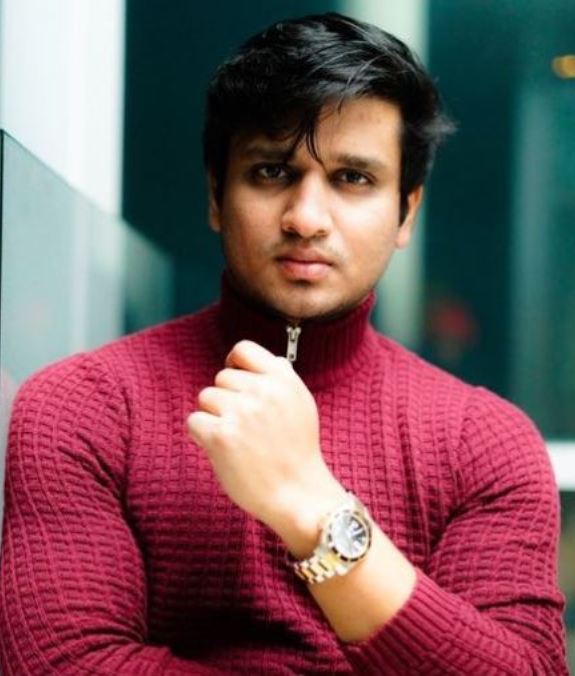 Nikhil Siddhartha is an Indian actor who predominantly appears in Telugu films. He is best known for playing lead roles in the films like Swamy Ra Ra as Surya (2013), Karthikeya as Karthikeya Karthik Kumaraswamy (2014), and Kirrak Party as Krishna (2018). Nikhil was shot to fame for playing the character of Karthikeya in the sequel of the film Karthikeya in August 2022.

Nikhil Siddhartha was born on Saturday, 1 June 1985 (age 37 years; as of 2022) in Begumpet, Hyderabad, India. His zodiac sign is Gemini. Nikhil attended Hyderabad Public School in Begumpet and St. Patrick’s High School in Secunderabad. He earned his bachelor’s degree in engineering from the Muffakham Jah College of Engineering and Technology in Hyderabad.
A childhood picture of Nikhil Siddhartha with his mother

On 14 May 2020, Nikhil got married to Pallavi Varma, a doctor, who belongs to Bhimavaram in Andhra Pradesh.
Nikhil Siddhartha, along with his wife, Pallavi Varma
The wedding took place at Nikhil’s farmhouse in Shamirpet, Hyderabad and was attended by their close friends and family members. In an interview, Nikhil revealed that Pallavi’s parents were not in favour of their daughter’s decision of marrying a man from the film industry, but Nikhil’s mother convinced Pallavi’s parents and clarified all the doubts related to their marriage. As per sources, Nikhil and Pallavi met each other through a mutual friend and started dating and on 3 February 2020, Nikhil announced his engagement to Pallavi.
Wedding picture of Nikhil Siddhartha and Pallavi Varma

In August 2017, it was rumoured that Nikhil got engaged to a girl from Hyderabad, Tejaswini, who was an engineer. According to some sources, Nikhil’s marriage with Tejaswini was an arranged affair and the couple was about to get married on 1 October 2017, but somehow it was called off due to unknown reasons. However, on being asked about his marriage rumours, Nikhil denied the same. A close source of Nikhil revealed the details about his wedding and said,
It’s an arranged marriage as Nikhil’s parents saw the girl first and liked her. Afterwards, Nikhil met and liked her too. They are now planning an engagement in a few days’ time. Now that his career is going strong and he is in the safe zone, he finally agreed to his parents’ wish.”

Nikhil follows Hinduism, and he is an ardent believer in Lord Krishna. In an interview, Nikhil talked about his belief in Lord Krishna and said,
Being from a Yadava Community, my family would always celebrate Krishnashtami in a very big way as it was the main festival in our family.”
Nikhil Siddhartha (right) seeking blessing from Lord Karthikeya Swamy at the Ilford London Murugan Temple

During his college days, Nikhil realised his passion for acting. He participated in various skits and stage plays. In an interview, Nikhil talked about his first experience of acting in a skit and said,
In the first year of my BE, I was very diligent and never missed a class but after that, I discovered my calling is elsewhere. I had performed in a skit during one of the cultural events at college and it was well received. I started by visiting the sets often. This gave me an idea of how things actually work in Tollywood.”
Nikhil, being from a non-filmy background, started his career as a junior artist. In 2006, he got an opportunity to assist the director and act in the Telugu film Hyderabad Nawabs in which he played the role of a college boy.
Nikhil Siddhartha (left) in a still from the film Hyderabad Nawabs (2006)

Before making his debut as a lead actor, Nikhil appeared in small roles in a few Telugu films. In 2007, he made his debut with the film Happy Days in which he played the lead role of Rajesh.
Nikhil Siddhartha as Rajesh in a still from the film Happy Days (2007)
In an interview, Nikhil expressed his gratitude for giving an opportunity to an outsider, who had no connection with any film associate and said,
It was in 2007 that director Sekhar Kammula gave me a break. It’s very difficult for an outsider to get a break, especially in the Telugu film industry. Either you need to be a star kid, or a movie family associate. But, Kammula is such a genuine person that he auditioned all newcomers, gave four people a break, and the movie turned out to be a blockbuster. It gave life to so many actors. I was lucky because 1.2 lakh people auditioned for that movie and only four of us were selected to play the lead roles. It was like being 1 in 25,000 or more.
Nikhil has appeared in a few Telugu films like Ankit, Pallavi & Friends as Ankit (2008), Aalasyam Amrutam as Ram (2010), Surya vs Surya as Surya (2015), Ekkadiki Pothavu Chinnavada as Arjun (2016), Keshava as Keshava (2017), Arjun Suravaram as Arjun (2019), and Karthikeya 2 as Karthikeya Kumaraswamy (2022).
Nikhil Siddhartha as Arjun in a still from the film Ekkadiki Pothavu Chinnavada (2016)
In an interview, on being asked about his experience of playing the role of Karthikeya in the Telugu film Karthikeya 2, Nikhil said,
Being an integral part of a magnum opus franchise like Karthikeya 2 was indeed a pleasure. The film has the right mix of mythology combined with modern science. The story-telling experience is vivid, and I would want a larger set of audience to witness it.
Nikhil Siddhartha (middle) as Karthikeya in a still from the film Karthikeya 2 (2022)

Being remarked as “a person with slave mentality”

In July 2020, Ram Gopal Verma, an Indian film director and screenwriter, released the trailer of his film ‘Powerstar,’ which was reportedly based on the life of Indian actor, filmmaker, and politician, Pawan Kalyan, the younger brother of actor-politician Chiranjeevi. Nikhil, who was disappointed with the trailer for portraying the life of Pawan Kalyan in a fictitious way, took a dig at Ram Gopal Verma and posted to Twitter, which read
Shikaram ni chusi Kukka entha Morigina.. a maha shikaram thala thippi chudadhu…meeeku Ardham ayyindi ga.” (No matter how loud a dog barks at a summit, the summit won’t even glance at it.)

After his tweet went viral, Ram Gopal Verma, on being asked about his response to Nikhil’s tweet, addressed Nikhil as a person with a slave mentality and said,
“I don’t know who Nikhil is; all these people are the same. They all like being his followers in hope that he has a good impression of them. All this stems from a pure slave mentality, but it’s fine. Nikhil must be a star, but they’re all the same, so how does it make a difference to me.”