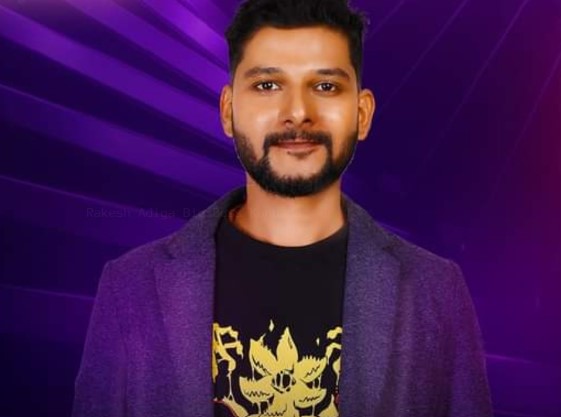 Rakesh Adiga is an Indian actor, screenwriter, director, and rapper. He primarily works in the Kannada cinema. He is also an accomplished playback singer and supporting actor. In August 2022, he came into the limelight after he participated as one of the contestants of the Kannada reality show Bigg Boss OTT.
Rakesh Adiga on the sets of Bigg Boss OTT Kannada in 2022

Rakesh Adiga was born on Friday, 6 June 1986  (age 36 years; as of 2022) in Bangalore, Karnataka, India. His zodiac sign is Gemini. He completed his school education at Janaseva Vidya Kendra residential school, Bangalore. He was born and brought up in the well-respected Adiga family of Karnataka, which is the owner of many hotels and restaurants across Karnataka. When he was studying in college, he was associated with a music band at college. In 2019, this band composed two songs for the Kannada movie – Harikatha.
A childhood picture of Rakesh Adiga

Rakesh Adiga with his mother and brother

Rakesh Adiga is not married.

Soon after completing his college studies, he established his own hip-hop music band named “Urban Lads” along with his friends and started rapping. Upon this, he became the first rapper from Kannada. His band was launched by Suraj Sarja.
Rakesh Adiga singing during a stage show

In 2009, Rakesh Adiga marked his acting debut with the film Jhoshh. The film gave him high recognition in the Kannada film industry and was successful at the box office.
Rakesh Adiga on the poster of the film Jhoshh in 2009
Rakesh Adiga then went on to appear in several Kannada movies including Raja Loves Radhe, Yaare Koogadali, Nanda Gokula, Mandahasa, and Karnataka Ayodhyapuram. He was then cast in a romantic film Mandahaasa in 2010, but it was delayed. In 2011, he appeared in the film Alemaari as a villain. Thereafter, he was cast in the film Manasology as a lover boy. Later, Rakesh Adiga worked as a villain in more than 13 Kannada movies. Rakesh Adiga worked in the movie Parie in 2012, and this film was a big failure at the box office.