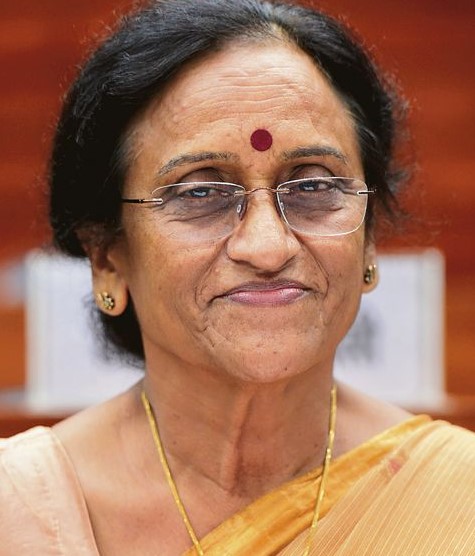 Rita Bahuguna Joshi is an Indian politician and educator. She has worked as a cabinet minister in the Government of Uttar Pradesh. She served as the president of the Uttar Pradesh Congress Committee from 2007 to 2012. The former Chief Minister of Uttar Pradesh, Hemwati Nandan Bahuguna, was her father. She joined the Bharatiya Janata Party on 20 October 2016. In 2019, she contested the general elections from the Allahabad constituency on the ticket of the BJP and won.

Rita Bahuguna Joshi was born on Sunday, 22 July 1949 (age 73 years; as of 2022) in Allahabad, United Provinces, India. Her zodiac sign is Cancer. Soon after completing her school education, she completed her MA and a PhD degree in History from Allahabad University in 1981. She grew up in a family of politicians from Allahabad, U.P.
H.N. Bahuguna (standing) at a Janata Party session in Simla

On 25 November 1976, she got married to Puran Chandra Joshi. Puran Chandra is in a logistics business occupation. The couple has a son named Mayank Joshi.
Rita Bahuguna Joshi with her husband, son, daughter-in-law, and granddaughter

She belongs to the Brahmin community.

From 1974 to 2008, Rita Bahuguna Joshi served as a Member of the UNDP Advisory Board of Local Authorities in Uttar Pradesh. In 2004, she was appointed as a Member of the Bejing + 10 Drafting Committee. From 1995 to 2000, she served as the mayor of the Allahabad constituency. She began working as the president of the All India Mahila Congress in 2003. She is a former vice president of the National Council of Women. She was appointed as the president of the Uttar Pradesh Congress Committee in 2007. She contested the Legislative Assembly elections for the Lucknow constituency in 2012 but lost. She again faced failure in 2014 the Lok Sabha elections from the Lucknow constituency. After serving the Indian National Congress for twenty-four years, on 20 October 2016, she joined Bharatiya Janta Party.
Rita Bahuguna Joshi while joining the BJP in 2016
She served as the President of the All India Mahila Congress from 2003 to 2008. As a women politician, she often raises her voice in many Women’s Movements for their upliftment, and frequently organises several seminars, campaigns, and demonstrations for the welfare of women. She led the campaign titled ‘Movement for Reservation for Women in Local Bodies’ in Uttar Pradesh in 1991-92.
Rita Bahuguna Joshi while addressing a movement for the women of India

Soon after completing her formal education, she started working as a Medieval and Modern History professor at the University of Allahabad.

Rita Bahuguna Joshi penned two books of history before venturing into politics. She authored a book titled “Hemvati Nandan Bahuguna: A political crusader on 23 May 2022. This book was based on the life story of her father and former U.P. chief minister late Hemwati Nandan Bahuguna. On the release of the book, Rita Joshi talked about the research and analysis she conducted to pen this book. She said,
I interviewed around 100 people and gathered newspaper clippings and documents from my father’s wardrobes, and the process took about 4-5 years. After that, I began writing. As a daughter, I had the opportunity to closely observe him.”
The book titled “Hemvati Nandan Bahuguna – A political crusader” was released by Rita Bahuguna Joshi under the banner of Vani Prakashan on Monday at a bookstore in Gomti Nagar, Lucknow

Detained for Hate Speech Against Mayawati

On 16 July 2009, she was detained in the Moradabad jail for 14 days in judicial custody. She was detained for making derogatory remarks about Uttar Pradesh Chief Minister Mayawati. In one of her speeches, Rita pointed towards Mayawati and stated that Mayawati was responsible for the failed law and order system in Uttar Pradesh and the increasing rape cases in the state. She stated that the rape victims were provided 25,000 rupees compensation to keep themselves away from the FIR against the accused. Rita Remake,
Simply compensating the women with money was not enough. Women who are raped should “throw the money at Mayawati’s face and tell her ‘you should also be raped and I will give you 10 million rupees.”
Rita, Rahul Gandhi, and Digvijay Singh were arrested by the Meerut police from Village Bhatta Parsaul of western Uttar Pradesh on 11 May 2011 while they were attending an agitation rally of the local farmers.
Rita Bahuguna Joshi with Rahul Gandhi while addressing a political rally

Violation of the Model Code of Conduct

An arrest warrant in the case of violation of the model code of conduct during the assembly elections in 2012 was issued against Rita Bahuguna Joshi on 21 October 2022. In 2012, she was associated with the Indian National Congress. She was found guilty of campaigning after the closure of the 2012 assembly elections. Mukesh Chaturvedi, the static magistrate, filed a case at Krishna Nagar police station against her on 17 February 2012. The elections investigating officer, Ramsahai Dwivedi filed a charge sheet against her in March 2012.

Note: The given estimates of movable and immovable assets are according to the year 2019. It excludes the assets owned by her husband and dependents.

Rita Bahuguna Joshi’s net worth for the financial year 2020-2021 was estimated to be Rs. 2.5 crores.
Note: It excludes the net worth of her husband and dependents.