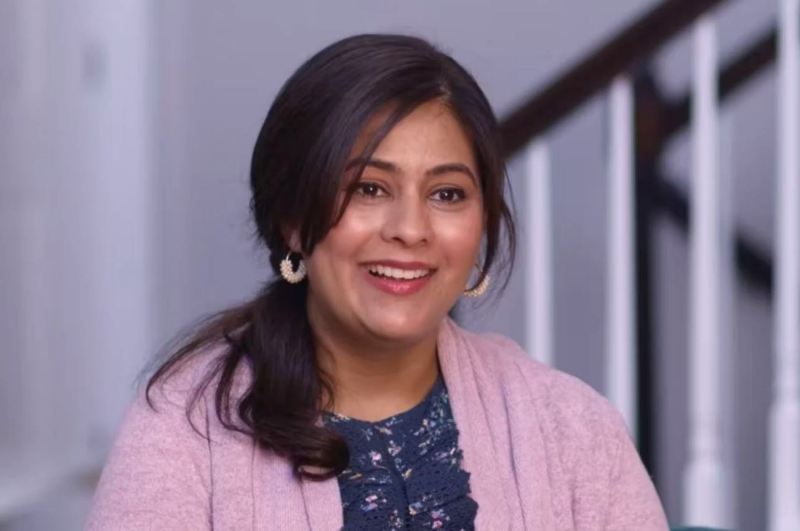 Rupam Kaur is an India-born American Pediatric Allergist & Immunologist, who came into the limelight in 2020 when she appeared on Netflix’s popular show Indian Matchmaking.

Rupam Kaur was born as Kanwaljit Kaur Brar was born in 1982 (age 40 years; as of 2022) in Punjab, India.
Rupam Kaur’s childhood picture with her parents
She moved to America in 1985 with her parents when she was three years old. She was first inclined towards pursuing a medical profession after Nobel Peace Prize in 1999 was awarded to Médecins Sans Frontières (Doctors Without Borders) in recognition of the organisation’s pioneering humanitarian work on several continents. From 2000-2003, she attended Widener University, where she pursued a bachelor’s degree in political science and government. In 2008, she earned her MD from Drexel University, Philadelphia. In 2012, she completed a Pediatric Residency Training Program at the Icahn School of Medicine at Mount Sinai, New York, and received board certification from the American Board of Pediatrics. At Drexel University, she was appointed as the president of Physicians for Social Responsibility. In 2014, she completed an Allergy/Immunology Fellowship Program at SUNY Health Science Center in Brooklyn and received board certification from the American Board of Allergy & Immunology (General).

In September 2020, she got married to Nitin Singh at the Sikh temple in Glen Cove, New York, whom she had met via the dating application Bumble in 2019.
Wedding day picture of Nitin Singh and Rupam Kaur
Nitin and Rupam were blessed with a son, Baaz Singh, on 4 July 2021. Previously, Rupam was married to a Sikh man for eight years with whom she has a daughter. She had met her ex-husband in a Sikh camp after which they fell in love and got married. Rupam Kaur decided to separate from her husband due to his infidelity. Similarly, Nitin also has a daughter from his previous marriage.
Rupam Kaur with her children

In 2017, she dedicated an Instagram post to her maternal grandmother, maternal aunt, and her mother, which read,
Happy Mothers Day to these 3 beautiful women and inspirations! On the right is my Nani, revolutionary outspoken badass who is a refugee, writer and teacher. Had 4 daughters and a full time job at a time when Indian society expected women to stay quietly at home to set a good example for their sons. In the middle is my masi, a University Dean, who is quietly winning the battle against breast cancer, and to the left my mom who sacrificed herself for 30 years to give us (3 sisters) a better opportunity in America. She taught us to never listen to others opinions of us and only care about our connection with God. LOVE.”
From left to right, Rupam Kaur’s mother, maternal aunt, and maternal grandmother

In 2018, Rupam Kaur, a divorced single mother living in Denver, agreed to be filmed for the docuseries Indian Matchmaking while meeting the matchmaker Sima Taparia from India, which was aired on Netflix in 2020. The show follows Sima Taparia, a marriage consultant from Mumbai, who tries her best to match her clients with the partner they desire as per the arranged marriage process. In the show, Sima told Rupam that her divorced single mother status would limit her pool of potential suitors, and she had very slim chances of getting remarried. During the show, Rupam didn’t find a match via Sima, but she found a guy through the online dating application Bumble and decided to pursue him.

In 2019, Rupam was visiting family in New York when she decided to open Bumble. A profile belonging to a man named Nitin caught her eye as it featured a photo of him with his daughter. In an interview, while talking about Nitin’s profile, she said,
I thought that was cool because it was another single parent in a community that’s pretty small.”
Thereafter, he approached Nitin and asked him out immediately but as Nitin was already occupied by his daughter they weren’t able to meet. Later, Nitin flew out to Denver, where Rupam lived, for their first date. They had a wonderful date that included brunch, drinks at a rooftop bar, and a hike, meanwhile discovering that they had a lot in common other than their faith and single parenthood, one of them being a taste for ‘90s alternative music. The couple spent the following year going on long weekend dates in cities like Miami and Washington D.C. Eventually, they introduced their daughters to each other. Later, Rupam and her daughter relocated from Denver to New York, where Nitin asked her to marry him.
Rupam Kaur and Nitin

She is a pediatric allergy specialist with advanced training in dermatology. From 2015 to 2020, she served as an Assistant Professor Pediatric at National Jewish Health, a hospital in Denver. In August 2020, she started serving as an assistant professor in the Department of Pediatrics at NYU Grossman School of Medicine. She shifted from Denver, Colorado, to New York after her marriage, where she works at Hassenfeld Children’s Hospital at NYU Langone.