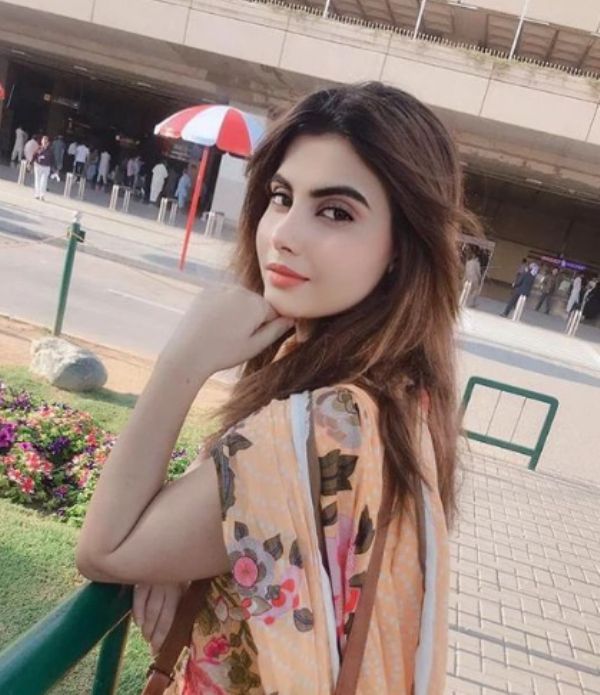 Sehar Shinwari is a Pakistani actress, host, social media influencer, and social media activist who made headlines in November 2022 after her tweet went viral in which she vowed to marry a Zimbabwean guy if Zimbabwe defeats India in the ICC Men’s T20 World Cup match on 6 November 2022 in Melbourne, Australia.

Sehar Shinwari was born on Wednesday, 13 November 1996  (age 26 years; as of 2022) in Hyderabad, Sindh provision of Pakistan. Her zodiac sign is Scorpio. Sehar completed her masters in political science.
Childhood picture of Sehar Shinwari

Sehar Shinwari belongs to a conservative Muslim family, which hailed from the Shinwari tribe of Kohat district in Khyber Pakhtunkhwa, Pakistan.

Sehar Shinwari is a Pashtun.

Since childhood, Sehar was fond of pursuing a career in acting. Being from a strict conservative Muslim family, initially, she faced resentment from her family members regarding her decision of becoming an actor, but despite all the obstacles, she pursued her dream of becoming an actor. In 2014, Sehar made her acting debut with the Pakistani comedy television show Sair Sawa Sair in which she played the role of Tina on AVT Khyber.
Poster of Sehar Shinwari’s debut television show Sair Sawa Sair
In 2015, she acted in the show Aitbar on AVT Khyber. In 2016, Sehar hosted the show Khyber Sahar on AVT Khyber. In 2017, Sehar played the role of Bakhtawara in the drama serial Khuboona Na Mri on AVT Khyber.

Accused a Pakistani producer of harassment

In May 2020, Sehar accused Rumi, producer of the channel Pakistan Television Corporation (PTV), of offering her to sleep with him in return for a role in the television show. Sehar alleged that after she rejected to sleep with him, Rumi ousted her from the show and terminated the contract signed by her for not fulfilling his wishes. In an interview, Sehar talked about the reason behind removing her from the television show and said,
2 years back I signed a contract of soap opera with PTV producer named Rumi in PTV and the next day he removed me just because I refused his offer to sleep with him. I know how they promoted local talent during PP and PML-N tenure. Now at least they’re earning through halal means.”

In November 2021, during the ICC Men’s T20 World Cup 2021, Sehar accused the Board of Control for Cricket in India (BCCI) of fixing the match between Afghanistan and India, held on 3 November 2021 in Abu Dabhi. India recorded its first win after losing to Pakistan and New Zealand in its first two matches.

Aakash Chopra, an Indian Cricket commentator and former international cricketer, took to Twitter and slammed Sehar with his tweet,

Sehar is often seen taking a dig at the Bhartiya Janta Party and the 14th prime minister of India Narendra Modi on Twitter. On 26 October 2022, she addressed Narendra Modi as “the present-day Raavan” following which she was immensely criticized by the Indians for commenting on their prime minister.

A few social media users trolled her with tweets like-

Typical of ur lot, No Guts👎👎👎 you speak from the other side of our Border and that too about our #PM,that only shows how cowardly you guys are!
— Weisel🇮🇳 (@weiselaqua) October 26, 2022

People in your country have neither food nor medical to survive with respect. Your PM is running around the world with begging bowl and your focus is India ? Really ? It seems Pakis are born obsessed with India.
— Bill Forbes (@BillFor69058472) October 26, 2022

May name is Sehar Shinwari and I believe in both our armed forces and PTI. Imran Khan is my hero and he is the only one who can get this country out of foreign slavery. ✌️
— Sehar Shinwari (@SeharShinwari) October 27, 2022

I really feel like the emojis were unnecessary https://t.co/tH3g0jCWe4
— Jimmy Neesham (@JimmyNeesh) August 28, 2019

As soon as the tweet went viral, several social media users lashed out at her and picked out her old tweets in which she was seen making false and unfulfilled promises.