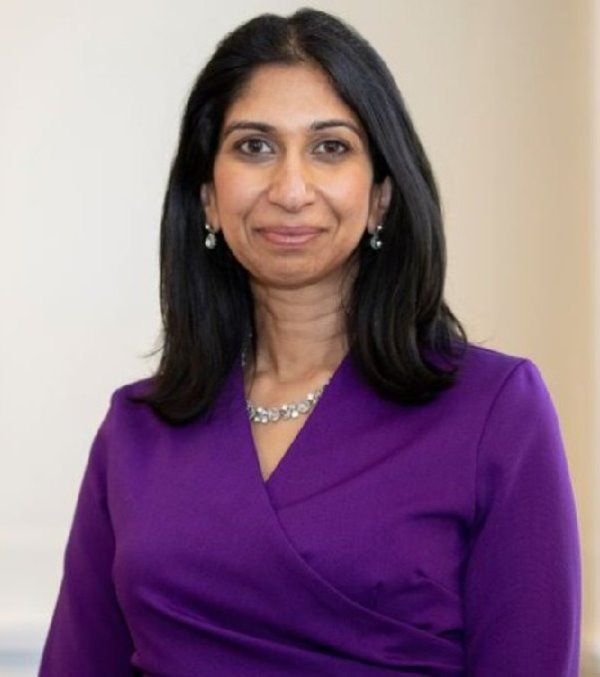 Suella Braverman is a British politician and barrister. In September 2022, she was appointed as the Home Secretary in the Cabinet, after succeeding Priti Patel. In 2015, she became a member of parliament for Fareham in Hampshire. In June 2017, she was appointed as the chairperson of the European Research Group, as a member of the Conservative Party. From 2020 to 2022, she served as the attorney general for England and Wales.

Sue-Ellen Cassiana “Suella” Fernandes was born on Thursday, 3 April 1980 (age 42 years; as of 2022) in Harrow, London, England. Her zodiac sign is Aries. She spent her childhood in Wembley, London, England. She went to Uxendon Manor Primary School in Brent, London, England. Later, she studied on scholarship at Heatherfield School, an independent day school for girls, in Pinner, Harrow. She did her bachelor’s in law at Queens’ College in Cambridge. While studying at Queens’ College, she became President of Cambridge University Conservative Association. She holds a master’s degree in Europen and French law at Panthéon-Sorbonne University in Paris, France. First, she studied there under Erasmus Programme, a European Union student exchange programme and then under Entente Cordiale Scholarship, which is a selective Franco-British scholarship scheme. She took New York Bar exam and qualified as an Attorney in New York State.
A childhood image of Suella, at the age of 6, with her parents

Her father, Christie Fernandes, worked for a housing association. Her mother, Uma Fernandes (birth name Mootien Pillay), worked as a nurse for 45 years and was a Conservative counsellor for 16 years. In the 2001 general elections, she was chosen for Conservative candidacy in the Tottenham constituency and for 2003 by-elections for the constituency of Brent East.
Suella Braverman with her parents and husband

Suella and Rael Braverman dated each other for three years, before getting married in 2018. In an interview, while talking about the beginning of their relationship, Rael said,

We met through some mutual friends, and then she invited me for a day in parliament. As far as first dates go it was certainty an unusual one, but I’ve always been interested in politics so I went along with it. I thoroughly enjoyed it and we agreed to meet up again. We had our first ‘proper’ date a few weeks later and it all took off from there.”
According to Suella, they started to like each other because of their common interests in politics. In an interview, she said,
Rael has just been so supportive of me in Fareham – I think the day I realised he was the one when he came out delivering leaflets for the election in the pouring rain.”
In October 2017, They went on a holiday to Cyprus, where Rael proposed to her.
Suella Braverman with boyfriend, Rael Braverman

Suella follows Buddhism and is a member of ‘Triratna Buddhist Community and Order,’ which is considered a controversial religious sect as it was claimed of sexual misconduct, abuse and inappropriate behaviour. She is a ‘Mitra,’ which means friend, in the community. She visits London Buddhist Centre every month. In 2022, Suella used Dhammapada, a collection of sayings of the Buddha, to take her oath of office.

At the age of 23, she was enlisted on the Central Office candidates list in 2003. In the same year, Suella was selected as the parliamentary candidate of the Conservative party for the Brent East by-election; however, she let her mother fight for the seat. She campaigned for her mother and promoted her by distributing leaflets with her father. The Guardian featured her in an article titled ‘The road to No 10.’ In 2005, she contested for the Leicester East constituency at the general election; however, she did not win. She stood for Bexhill and Battle constituency; however, lost the elections. In the 2012 Assembly elections, she was the conservative candidate for the London Assembly and was in the fourth position on the Conservative London-wide list.

In 2015, she was elected as the MP for Fareham to the House of Commons with a majority of 22,262 votes. On 1 June 2015, she gave her maiden speech. In her speech, she said,
I will be a strong voice for Fareham. More than 1,000 young people travel too far for A-levels, and I hope to see more sixth-form provision within the constituency. As an increasing and ageing population puts pressure on local GP services, schools and roads, I plan to be an advocate for all my constituents as we face the challenge of building more homes. It is a stroke of luck to be born British, and my indebtedness goes to the heart of why I am a Conservative. Our party rewards endeavour, enables compassion and liberates people from the shackles of the state. Our party says, “It doesn’t matter where you start. You can make your life and that of others better by taking responsibility and through self-empowerment and generosity.” I will do all I can to serve the people of Fareham with humility, integrity and warmth.”
On 1 June 2015, Suella giving her maiden speech in Parliament
She was a member of the Education Select Committee and the Education, Skills and the Economy Sub-Committee for two years, from 2015 to 2017. In 2015, she became a member of the Joint Committee on the Draft Investigatory Powers Bill. From September 2016 to May 2017, she was the chairperson of the all-party parliamentary group (APPG) on Financial Education. She worked with Young Enterprise, a national charity, and journalist Martin Lewis and launched a report in parliament titled “Financial Education in Schools: Two Years On – Job Done?,” which demanded better financial education in schools. In 2017, she became the commissioner of the Social Market Foundation Commission; the commission was formed to address the issue of inequality in education at primary and secondary levels in England and Wales. In 2016, she enrolled in the Armed Forces Parliamentary Scheme from which she graduated in 2017. She has been appointed as the chairperson in several meetings with executives of Southern Health NHS Foundation Trust and other MPs on the All-Party Parliamentary Group for Hampshire in which they discussed the issue of poor care quality and the deaths of patients in Hampshire. In 2016, she became a member of the inquiry panel of the think-tank British Future to inspect how the UK is protecting the rights of EU citizens. In 2017, she chaired the European Research Group, until she was promoted to the ministerial office. After the general elections in 2017, she served as Parliamentary Private Secretary. She was designated as Parliamentary Under-Secretary of State at the Department for Exiting the European Union, during the reshuffle in January 2018 by then Prime Minister of the UK, Theresa May.

On 6 July 2022, she called the then Prime Minister, Boris Johnson, to resign from his position during the United Kingdom government crisis. She told Robert Peston, a political editor, that Boris had been handling matters in a dreadful way. Conservative Party members were not satisfied with his work and the decisions made by him. In an interview, she said,
The balance has tipped now in favour of saying that the Prime Minister – it pains me to say it – but it’s time to go.”
She stood in the Conservative Party leadership elections to take his place. She was eliminated in the second round of the 2022 Conservative Party leadership elections after she won only 27 votes. Later, she decided to promote Liz Truss.
Suella Braverman promoting Liz Truss

Suella was a supporter of Brexit, and she heavily campaigned for the UK’s withdrawal from the European Convention on Human Rights. She is also a supporter of sending refugees and migrants crossing the English Channel to Rwanda asylum under the UK and Rwanda Migration and Economic Development Partnership in 2022. Regarding this, in an interview, she said,
If I get trolled and I provoke a bad response on Twitter I know I’m doing the right thing. Twitter is a sewer of left-wing bile. The extreme left pile on is often a consequence of sound conservative values.”

In 2015, she became the founder and chairperson of the governors at the Michaela Community School, a free secondary school. She is also a supporter of the plans to create a free school in Fareham. She is a member of the advisory board of the New Schools Network (NSN), a United Kingdom-registered charity and former think tank, which helps in setting up free schools within the English state education sector.

In 2022, in an interview, while talking about how children, in schools, should be treated on the basis of their sex, instead of their self-identified gender. Suella said,
Under-18s cannot get a gender recognition certificate, under-18s cannot legally change sex. So again in the context of schools, I think it’s even clearer actually. A male child who says in a school that they are a trans girl, that they want to be female, is legally still a boy or a male. And they can be treated as such under the law. And schools have a right to treat them as such under the law.”