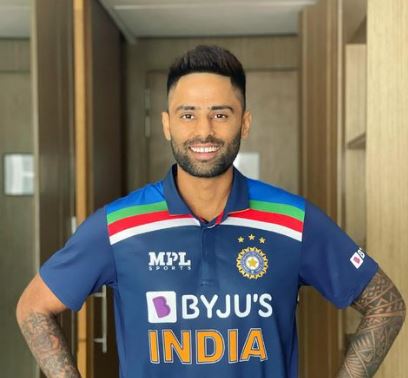 Suryakumar Yadav is an Indian cricketer, who plays for the Indian national cricket team primarily as a batsman in the middle order. As of November 2022, Yadav is ranked as the number one batsman in the world in T20 international cricket. A right-hand batter and a right-arm medium pacer, Suryakumar is known for his 360-degree shots, all around the ground, producing uppercuts, inside-out drives, ramps, pulls, scoops, lofts, sweeps, and reverse sweep in profusion.

Surya Kumar Ashok Yadav was born on Friday, 14 September 1990 (age 32 years; as of 2022) in Mumbai, Maharashtra. His zodiac sign is Virgo.
Suryakumar Yadav in childhood with his father
His family has its roots in Hathouda village of Ghazipur, Uttar Pradesh, from where his father migrated to Mumbai to pursue his (Surya’s father) career. Suryakumar was 10 years old at that time. In Mumbai, Yadav began playing cricket and badminton with his friends in the streets of Chembur. He was equally good at both. Seeing his inclination towards sports, his father asked Suryakumar to choose one sport between the two. After much thought, when Suryakumar decided to go forward with cricket, enrolled him in a cricket camp in BARC colony in Chembur. His coach Ashok Kamat was also an employee at his father’s department, who told his father that Yadav could surely reach Ranji level. He trained at his colony’s cricket camp for a while and then joined Elf Vengsarkar Academy of former international cricketer Dilip Vengsarkar and started playing age-group cricket when he was 12 years old. In an interview, while talking about the instances which helped Surya make a career in cricket, his father said,
It helped that the colony had a ground of its own. Besides, stalwarts such as former Indian captain Dilip Vengsarkar and batsman Lalchand Rajput had ties with the colony and would often visit.”
Yadav has also learned cricket from his paternal uncle, Vinod Yadav, who was his first coach. He did his schooling at Atomic Energy Central School, Mumbai. He then attended the Atomic Energy Junior College in Mumbai. Yadav pursued a Bachelor of Commerce (B.Com) from Pillai College of Arts, Commerce and Science, Mumbai.

Suryakumar has got around 18 tattoos inked on his body which include:

He belongs to a middle-class family.

Suryakumar Yadav met his wife, Devisha Shetty (classical dancer), for the first time in 2012 at the R.A. Podar College Of Commerce & Economics, Mumbai, where they both studied. They soon became friends and then started dating each other. While Devisha got impressed by Suryakumar’s batting style, Suryakumar was flattened by Devisha’s dance moves. After dating each other for some time, the couple got engaged in May 2016. They tied the knot on 7 July 2016 in Mumbai.
Surya Kumar Yadav’s wedding picture
Suryakumar Yadav with his family

Grandfather Vikram Singh Yadav was an inspector in the CRPF and was honoured with President’s Police Medal in 1991.

He belongs to a Kshatriya family.

Surya Kumar Yadav began playing club cricket for Parsi Gymkhana Cricket Club in Mumbai. Subsequently, he played for Bharat Petroleum Corporation Limited, Shivaji Park Gymkhana club, and Dadar Union club in Mumbai’s club cricket. In 2010, Suryakumar Yadav made his debut in first-class cricket and played for Mumbai, scoring 73 off 89 balls against Delhi. He played in Syed Mushtaq Ali Trophy in 2010 itself and scored more than a thousand runs in Under-22 and won the MA Chidambaram Trophy. Yadav was then selected for Ranji Trophy in 2011-12 and scored a double century against Odisha; Yadav was the leading run scorer for Mumbai in the season scoring 754 runs. Suryakumar also remained the captain of the Mumbai cricket team for a brief period of time in the Ranji trophy. Yadav was stripped of captaincy by Mumbai Cricket Association (MCA) during the 2014–15 Ranji Trophy. During 2018-2019, Ranji Trophy, Yadav was dropped from the Mumbai team. In October 2018, Yadav was named in India C’s squad for the 2018–19 Deodhar Trophy. He was also a part of India C team in the 2019-20 Deodhar Trophy. He has been a part of various domestic cricket teams like Mumbai A, West Zone, India Red, India blue, and Mumbai cricket association’s IX teams.

Suryakumar Yadav has been a part of several international junior cricket teams like India under 23, India A, and India C. Suryakumar Yadav was named in the Indian T20 International squad for their series against England in February 2021. He made his T20 International debut against England on 14 March 2021 at Narendra Modi Stadium in Ahmedabad. Yadav got the first opportunity to bat in the fourth game of the series, hitting a six in his first ball. He became the first Indian to do so in T20 International. He scored a fifty in the match. Subsequently, he was named in the Indian squad for One Day International for India’s series against England in July 2021. He made his ODI debut for India against Sri Lanka on 18 July 2021 at Colombo (RPS). Yadav scored his first ODI fifty against Sri Lanka on 21 July 2021. In January 2023, Yadav became a part of the Indian squad in the three-match T20 International series between India and Sri Lanka. Yadav hit a jaw-dropping century against Sri Lanka in the third and final T20I in Rajkot, becoming the talk of the town. He scored 112* runs off 51 balls and helped India to score a massive total of 228/5.

In May 2022, Rajasthan Royals batsman Riyan Parag attracted severe criticism after he gave a death scare to his team’s veteran spinner R Ashwin following a run-out in Qualifier 1 of the IPL 2022 against Gujarat Titans (GT). Soon after the incident, Suryakumar Yadav made a tweet, praising Riyan Parag for his attitude on the field. His tweet did not go down well with the Twitterverse, who criticised Yadav for supporting Riyan’s aggressive behaviour. However, later Yadav clarified through another tweet that his earlier tweet on Parag was for his electrifying fielding on the ground and not for his antics.

In 2014, Suryakumar Yadav got involved in an on-field altercation with team-mate Shardul Thakur post which there were several complaints about his “hothead” nature by his other team-mates. Apparently, the argument began after a disagreement between Yadav and Thakur on a particular field setting during the match against MP. After the incident, both players were issued a warning. Later, Yadav was stripped of the Mumbai Indians captaincy across all formats due to his attitude issues.

Yadav owns a fleet of luxury cars that include:

A bike enthusiast, Suryakumar owns a few sports bikes including

As of 2022, he earns Rs. 70-80 lakhs per month through his cricket matches and brand endorsing. Yadav’s annual income is estimated to be Rs. 8 crores.