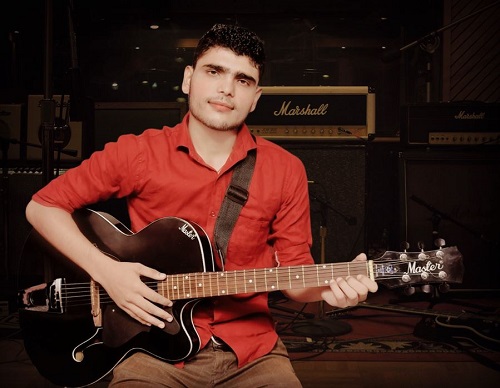 Sushank Singh is an expert independent musician on the rise who owns the Sushank Singh music label. Sushank has studied under numerous renowned musical influencers in his community while attending college at the University of Kanpur including Krishna Rao his coach.

Sushank Singh (stage name) aka Sushank Yadav (real name) was born on 29 July 2000 (age 22 years; as of 2022) in Farrukhabad, Uttar Pradesh, India. He did his schooling at Army Public Schools and intermediate in medical (PCB) from J.S.M Public School in Fatehgarh, Uttar Pradesh. He pursued BSc (Zoology) from CSJM Kanpur University, Uttar Pradesh.

He belongs to an army family.

There are six members in his family. His father Mr Jaipal Singh, is serving in the Indian army. His mother, Mrs Rani Yadav, is a homemaker. His brothers, Prithvi Raj & Ranti Dev, and his sister Karishma Yadav are studying at Army Public School, Fatehgarh Cantt.

Although none of his family members was involved in music, Sushank had an ear and active passion for music at the age of 2. Ever since he was a toddler, Sushank’s friends Abhishek and Anand committed Sushank to help him in learning music. Over the years, Sushank Singh developed his skills with vocal practice, guitar lessons, piano lessons, and even violin lessons for a short period. He began writing and performing his own music. After studying music, he started giving rhythmic flavour to all of his music. Sushank Singh has received numerous awards and acknowledgements including a music certificate and an award from his university. His famous songs on Spotify are Tum hi ho/Mitti di Khushboo. After starting his career in music along with his friend Anand, he joined a music studio Sangeet Bajega owned by his friend Sam Singh. Now, he releases his own music and composes lyrics for his songs. In 2021, Sushank Singh was awarded by best original song (Mere Maula) at Tansen Music Competition.
Mere Maula song poster
His song ‘Kho Gayi Kyu’ was released on 1st August 2022. The song depicts the feeling of a boy and girl whose friendship was broken and they did not meet again. After this boy goes deep into memories of their friendship and the girl also thinks about her boyfriend.
Kho Gyi Kyu poster
His upcoming album will release in the year 2023. The album’s name is Meri Maa by Roshini and Sushank Singh, album shares a feeling of a child towards his/her mother. Roshani’s soulful voice as a mother gives blessing to her child in this song. Sushank has sung many songs like sad songs, patriotic songs, and romantic songs. Some of the songs sung and written by Sushank Singh are Vande Mataram, Mere Maula, Jeetenge, Mehsoos, Laher Si, and Blackguards BGM.
Mehsoos song poster
Blackguards BGM song poster