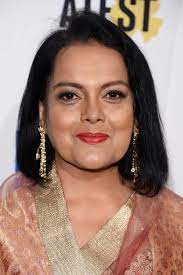 Sushmita Mukherjee (Actress) Height, Weight, Date of Birth, Age, Wiki, Biography, Husband  More
Sushmita Mukherjee is an Indian film & television actress and author. She is popular for her role of Kitty in the detective TV serial Karamchand. Sushmita has been worked more than 50 television serials including popular names like Ishqbaaaz, Krishna Chali London, Madhubala and Kabhi Saas Kabhi Bahu. Apart from television, she is quite active in Bollywood films also.

Sushmita Mukherjee was born on 20 January in New Delhi, India to a Brahmin household.. Her father was a government official. Sushmita did post-graduation from Jesus and Mary College, Women’s college in New Delhi. She attended National School of Drama from 1980 to 1983.
Bio

Sushmita Mukherjee made her debut in 1987 with the movie Yeh Woh Manzil Toh Nahin featuring Naseeruddin Shah. She was appreciated for her role of blind Mangala Dadi in the movie Golmaal (2006). Sushmita has worked in movies namely Main Zinda Hoon, Khalnayak, Dillagi, Kyaa Kool Hai Hum, Golmaal, Ugly Aur Pagli, Dostana, Aaja Nachle, Batti Gul Meter Chalu and more. She made her Hollywood Debut with the movie The Other End of the Line in 2008.

She married film director Sudhir Mishra in 1978 but later they were divorced. Later she married Raja Bundela, an actor and politician in 1993. They have two sons Rudransh Bundela and Rudranuj Bundela.
Marital Status and More

Some Facts About Sushmita Mukherjee

If you have more details about Sushmita Mukherjee. Please comment below we will updated within a hour.