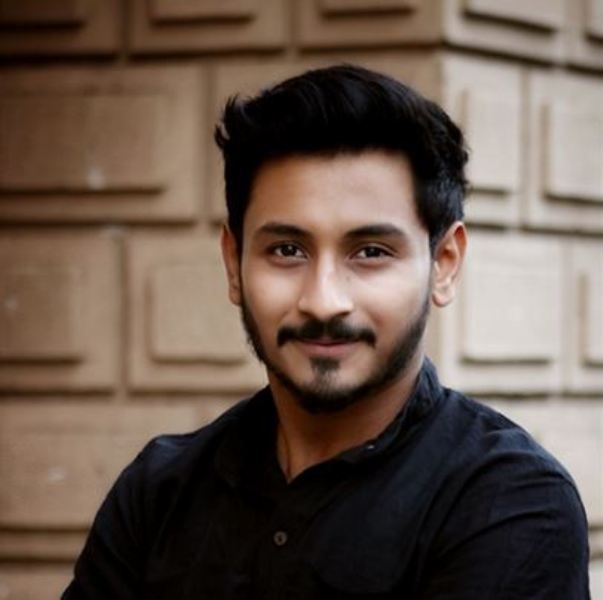 Utsav Sarkar was born on 4 February in Kolkatta, India. Utsav studied at a boarding school in Panchgani in Maharashtra. He completed his bachelor’s degree in mass communication from Usha Pravin Gandhi College of Arts, Science and Commerce in Vile Parle, Mumbai (2012-2015). Utsav pursued his master’s in theatre performing arts at the Academy of Theatre Arts, the University of Mumbai in Mumbai (2015-2017).  He was raised solely by his mother.
A childhood picture of Utsav Sarkar (left) with his mother, father, and elder brother (right)

Utsav’s father’s name is Prasenjit, and his mother’s name is Malini Mukherjee Sarkar. Utsav’s parents are divorced.
Utsav Sarkar with his mother
He has a younger sister, Aakansha Sarkar.
A picture of Utsav Sarkar’s sister, Aakansha, with her husband, Dhruv
Utsav has an elder brother, Samrat Sarkar, who worked as a Regional Growth Manager at Smallcase.
Utsav Sarkar’s mother and elder brother, Samrat Sarkar

Utsav Sarkar with his grandmother

Since his school days, Utsav had a great interest in performing on stage. He started taking part in school plays and drama competitions. While studying in college, Utsav acted in several theatrical productions like The Glass Menagerie, Baanjh, Khariya Ka Ghera, The Two of Us, A Doll’s House, and Dhik Tam.
Utsav Sarkar in a still from the play ‘Baanjh’
Utsav Sarkar in a still from the play A Doll’s House
In January 2022, Utsav Sarkar’s play, The Two of Us in which he played the role of Nikhil, premiered on YouTube.

After completing his post-graduation, Utsav worked as a screenwriter for various production houses in Mumbai. In December 2019, Utsav started as an associate screenwriter at Happi Digital in Mumbai, and he worked there for a period of three months. In February 2020, he joined Prakash Jha Productions Private Limited as an assistant screenwriter in Mumbai, and he served there for around four months. Later, he joined BuddyBits in Mumbai and worked there as a creative producer and screenwriter. In December 2020, he worked as a sanctioned writer at Third Bell Productionz in Mumbai.

In 2019, Utsav made his digital debut with the web series Bhram as Paglu on ZEE5.
Poster of Utsav Sarkar’s debut web series Bhram
In February 2021, Utsav Sarkar appeared in the web series The Lineup in which he played the role of a struggling poet, Shayantan Roy, on YouTube. He was also the writer of the series. In an interview, Utsav talked about how he could relate to the role that he played in the web series The Lineup and said,
Shayantan is an aspiring poet who wants fame and everything that goes with it, but is stuck in a 9 to 5 job to feed his family. He is an ambivert who keeps things to himself and only talks in poetry. I relate to him in the sense that things we are most passionate about may not always fetch us a livelihood and sometimes we have to make-do doing a job we don’t like. However, Shayantan’s struggles are harder than mine as I am fortunate enough to do what I love for a living. He doesn’t have the liberty to do so, and therein lies his angst.”
Utsav Sarkar (left) in a still from the web series The Lineup

Utsav has a YouTube channel, Flush Off, , where he posts funny video content, acted, directed and written by him. Utsav’s video ‘Akela Hoon, Khush Hoon’ on the YouTube channel BuddyBits, which was uploaded on 20 September 2018, has crossed over 2.6M views.

In June 2019, Utsav Sarkar appeared in a commercial for the brand Hero Bangladesh.