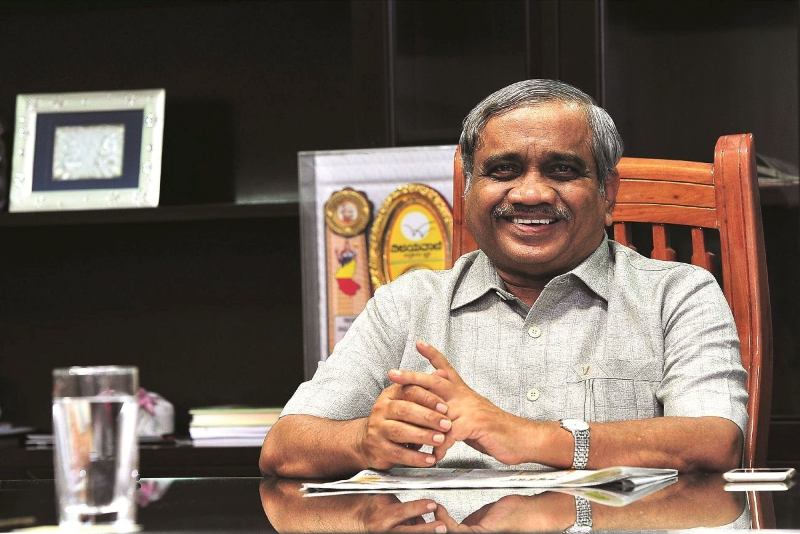 Vijay Sankeshwar is an Indian businessman and politician. He is also the founder of VRL Logistics Limited. He made headlines in October 2022, when it was announced that a biopic on him would be released in 2022.

Vijay Sankeshwar was born on Wednesday, 2 Aug 1950 (age 72 years; as of 2022) in Gadag-Betageri city, Mysore state (now Karnataka), India. After completing his school studies, Vijay Sankeshwar enrolled at Adarsha Shikshana Samiti College of Commerce in Karnataka, where he pursued a bachelor’s degree in commerce.

Vijay Sankeshwar’s career as a businessman began in 1966 when his father gifted him his first printing press, Vijay Printing Press, on his 16th birthday. In 1969, aged 19, Vijay Sankeshwar modernised his printing press by adding modern machinery in it to expand his printing business. According to Vijay Sankeshwar, for installing modern machinery in his printing press, he had to borrow Rs 1 lakh from the bank. Talking about his printing press, he said,
My father was reluctant to send me to college after my schooling. He wanted me to get into the printing business and settle down. So my father gifted me a printing press named ‘Vijay Printing Press’, it was a very small set up with just one machine and two employees. I took a critical decision to take the company to the next level and added a few modern printing machinery, which then cost one lakh rupees.”
While expanding his printing business, Vijay wanted to establish another business in transport; therefore, in 1976, Vijay Sankeshwar founded his own transport company named Vijayanand Roadlines. Initially, he had only one truck that he had bought by taking a loan of Rs 2 lakhs. Talking about it, he said,
With no communication access to reach the drivers once they hit the road, I had no clue when the cargo would reach the customer, till the trucks came back safe to the warehouse. I have suffered severe losses and frequent accidents of vehicles that I owned. Not deterred by these setbacks, I worked hard to reach my goal.”
In 1978, Vijay and his family shifted to Hubballi to expand their transport business. There, he bought two more transport trucks and increased the staff working in his transport business. By the beginning of 1990, his transport company had a fleet of 117 commercial vehicles, and his company’s annual turnover was more than Rs 4 Crore. Two years later, Vijay began courier delivery services and procured more trucks in Karnataka. By 1996, he had purchased four passenger buses, which were used to ferry passengers from Hubballi to Bangalore and vice versa. In 2006, VRL Logistics Limited established a 42.5 Mw wind power venture at Mundargi at Kappatgudda, Gadag district, Karnataka. Talking about it, Vijay Sankeshwar said,
All of my ventures were completely and undoubtedly based on trial and error method. I took maximum risk as well as pride in whatever I have done so far. We have never copied anyone in any of our business models, ever.”
As of 2014, VLR Logistics Limited had more than 5111 vehicles out of which they have 295 passenger transport Vehicles and 4816 goods transport vehicles.
Anand Sankeshwar and Vijay Sankeshwar standing in front of the trucks owned by VLR Logistics Ltd

Vijay Sankeshwar’s affiliation with politics began at an early age. When he was 12 years old, he used to partake in different types of meetings and gatherings held by Rashtriya Swayamsevak Sangh (RSS). He also used to participate in election campaigning of the Bharatiya Janata Party (BJP) during state and national elections. In 1993, Vijay Sankeshwar joined the BJP following which he held several state-level party appointments. In 1996, he contested the 11th Lok Sabha elections from BJP from the Dharwad constituency in Karnataka and won. In 1997, as a member of the parliament, he was appointed a member of the Finance Committee, Consultative Committee, and Surface Transport Committee. In 1998, he was once again given a ticket by the BJP to contest the general elections from the Dharwad constituency. In 1999, he once again contested general elections from Dharwad and won a seat in the Lok Sabha. From 1999 to 2000, Vijay Lankeshwar served as a member of parliamentary committees like the Committee on Commerce and the Committee on Transport and Tourism. In 2003, due to a conflict between him and the BJP, Vijay left the BJP and formed his party Kannada Naadu Party (KNP). In 2004, he merged the KNP with Karnataka Janata Paksha (KJP), founded by B. S. Yediyurappa. Later, Vijay Sankeshwara entered the Karnataka Legislative Assembly as a Member of the Legislative Council (MLC). In 2014, he rejoined the BJP after Karnataka Janata Paksha (KJP) amalgamated with the Bharatiya Janata Party (BJP).

The lemon juice row during COVID-19

In 2021, at a time when the country was facing a shortage of oxygen due to a steep rise in COVID-19 cases, Vijay Sankeshwar made a statement in which he claimed that if people put two drops of lemon juice in their nostrils, it would increase the level of oxygen in their body and would help them in preventing contracting coronavirus following which a government school teacher, Basavaraj Malipatil from Raichur, who listened to his advice, injected two drops of lemon juice in the nostrils as a result of which the teacher died. After the death, Bheemagouda Paragonda, a lawyer and an RTI activist, filed a complaint against Vijay Sankeshwar with the commissioners of the Dharwad and Raichur districts, urging them to lodge a complaint against Vijay for misleading the public during the COVID-19 pandemic. Bheemagouda Paragonda also accused the state government of taking no action against its leaders for misleading the masses during the pandemic. Talking about it, Paragonda said,
Mr. Vijay Sankeshwar is responsible for the death of Basavaraj Malipatil. He died after following the home remedy as told by Mr Vijay. I urge the the jurisdictional officers to file a suo motu case under Section 306 of the Indian Penal Code and some sections of Disaster Management Act. Also, the Karantaka government should pay a compensation of Rs 50 lakh to the family of the deceased teacher in Raichur.”
A newspaper cutout reporting Vijay Sankeshwara’s statement