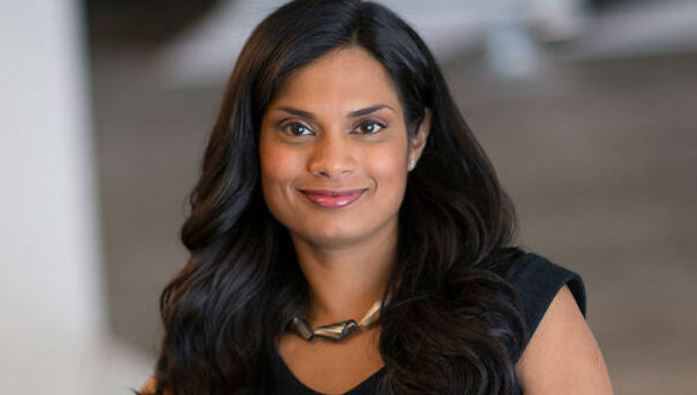 Vijaya Gadde is an American lawyer who served as the general counsel and the head of legal, public policy, and trust & safety lead at Twitter from August 2013 to October 2022. She is of Indian origin. Gadde came into the limelight after she spearheaded the decision to permanently suspend the Twitter account of America’s former President Donald Trump in 2021. She was terminated from her position at Twitter on 27 October 2022 by Elon Musk, following Musk’s acquisition of Twitter.

Vijaya Gadde was born in 1974 (age48 years; as of 2022) in Hyderabad, Telangana, India. At the age of three, she moved to Beaumont, Texas, with her family, where her father had initially moved to pursue his graduation.
Vijaya Gadde’s childhood picture
A few months later, her family shifted to the east coast, where Vijaya received her school education in New Jersey. After completing her schooling, Vijaya attended Cornell University, Ithaca, New York, (1993-1997) to pursue a Bachelor of Science in Industrial and Labor Relations. Thereafter, she enrolled herself at the New York University School of Law, New York, (1997-2000) to obtain a Doctor of Jurisprudence.

Her father worked as a chemical engineer in oil refineries in the Gulf of Mexico. He also used to collect insurance premiums as a side job in Beaumont, Texas. Her mother’s name is Ramani Gadde. She has a younger sister named Kavitha Gadde, who is the head of Strategic Publisher Partnerships in America.
Vijaya Gadde with her mother
Vijaya Gadde with her mother and sister

Vijaya Gadde is married to Ramsey Homsany, a lawyer and tech executive. Ramsey is the co-founder and president of Octant Bio, a biotechnology research company established to improve drug discovery in the health industry. Homsany formerly worked as an executive at file-hosting service Dropbox. He has also served as the vice president of Google. Together, the couple has two children, a daughter named Rumi and a son.
Vijaya Gadde with her husband

After obtaining a degree in law, in October 2000, Gadde began working as an associate at Wilson Sonsini Goodrich & Rosati, an American law firm headquartered in Palo Alto, California. While working there, she closely monitored the acquisition of McClatchy Co.-Knight Ridder Inc. in 2006 worth $4.1 billion. Vijaya also acted as a counsel to the New York Stock Exchange’s Proxy Working Group and Committee on Corporate Governance. She worked at WSGR for almost a decade and resigned from her position in April 2010. In October 2010, Vijaya joined Juniper Networks, a network hardware company in California, as a senior director and associate general counsel (corporate). She worked there for around a year. Gadde started working at Twitter, San Francisco, California, in July 2011 as director and legal head. At Twitter she initially handled general corporate, securities, M&A, and international matters. After working there for around two years, Vijaya was promoted to the position of general counsel and the head of legal, public policy, and trust & safety lead in the company.
Vijaya Gadde explaining the policies of Twitter at an event

In 2018, Vijaya Gadde landed into a controversy she, along with Twitter CEO Jack Dorsey, was photographed holding a placard stating “Smash Brahmanical Patriarchy.” The incident happened during Dorsey and Gadde’s visit to India where they met Dalit activists to discuss their experiences on Twitter. Soon after their meeting ended, the activists gave Dorsey a sign reading “Smash Brahminical Patriarchy” with which he was photographed. Gadde was standing next to him in the photograph. Later, Gadde and Dorsey were criticised on social media for discriminating against Brahmins and giving fuel to caste and gender-based oppression in India. Later, Gadde took to her social media handle to apologise and clarified that the placard was presented to them by the Dalit activists. Stressing that Twitter aims to be an impartial platform, Vijaya wrote,
I’m very sorry for this. It’s not reflective of our views. We took a private photo with a gift just given to us – we should have been more thoughtful. Twitter strives to be an impartial platform for all. We failed to do that here & we must do better to serve our customers in India.”