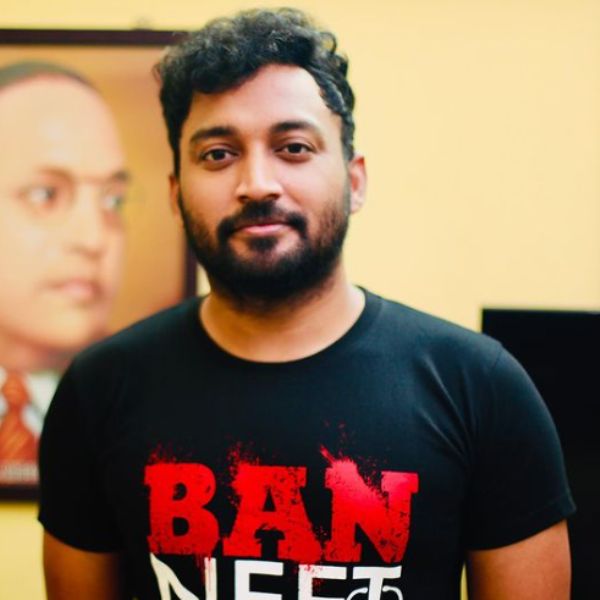 Vikraman Radhakrishnan is an Indian politician, anchor, and journalist who is known for becoming the first digital media political anchor to participate in the reality television show Bigg Boss Tamil season 6 on Star Vijay (October 2022).

Vikraman R was born on 24 August in Tirunelveli, Tamil Nadu. Vikraman was bought up in Theni.

Vikraman’s father’s name is Radha Krishnan. There is not much information available about his mother.

As of 2022, Vikraman Radhakrishnan is unmarried.

Initially, Vikraman worked as a correspondent for Puthiya Thalaimurai TV, which is a Tamil digital news channel headquartered in Chennai, Tamil Nadu, India.

Vikraman worked as a political editor at Galatta Media, which is a media company in Chennai, Tamil Nadu.

In 2020, Vikraman was appointed as a state spokesperson of the Liberation Tigers Party. On 26 February 2021, Vikraman was appointed as a spokesperson of the Viduthalai Chiruthaigal Kachi (VCK) party in Tamilnadu, founded by Thol Thirumalavalan. Viduthalai Chiruthaigal Kachi (VCK) is an Indian political party, which aims at eradicating caste-based discrimination.
Vikraman Radhakrishnan officiated as the spokesperson for Viduthalai Chiruthaigal Katchi
In an interview, Vikraman recalled an incident, which made him dive into politics after working as a journalist and said,
During Covid, a woman contacted me on social media and appealed for help stating that her brother was unwell. She told me that her parents were quite old and that they lived abroad. She called it a desperate situation and asked if I could help her. As a journalist, I had a set of followers, and I tweeted about it. An ambulance was soon ready at her disposal and the state’s CM, too, replied to me. So, I used this attention that I got in a productive way. But a lone man with an ideology doesn’t get you far. You need more people around you who are of the same thoughts and ideology as you to make things happen. I am someone who believes that the justice you get in the Legislative Assembly is more important than the one you get in the court. Even if you can’t do something, you should make those in power do it. It’s the end result that matters.”

Vikraman accused Sumanth C. Raman, a Tamil television anchor and sports commentator, of ill-treating and discriminating against the people based on their caste. Vikraman alleged that when he went to his house for an interview, he was denied a glass of water, even after several requests. He took to Twitter and posted,
When I came to your house to interview you, you sent me back without even giving me a glass of water. When I asked for it it to you myself, you suggested me to receive water from the watchman. Why is that ??”
Sumanth addressed his allegations as baseless and demanded to withdraw his statement with an apology. Vikraman replied to his tweet, which read,
Even two cameramen were accompanying me at that time. Don’t threaten a journalist. Our truth will triumph”

However, Sumanth denied Vikram’s allegation and threatened to take legal actions against him to which he replied with a tweet,
“I am not going to fear for these kind of gimmicks. Truth will triumph”

In June 2022, during a debate on the English news channel Times Now, Vikraman insulted the Hindu god Lord Krishna, and he passed an offensive statement about Lord Krishna’s illegitimate relationship with the Gopis (devotees of Krishna) in his youth. He said,
Krishna’s young age life was full of illicit (immoral) love affairs with the women of Vrindavan. It was called Rasleela.”
The statement passed by Vikraman was found offensive by several people as it hurt their religious sentiments. He was addressed as anti-Hindu for passing such derogatory remarks on the Hindu god. Rahul Easwar, a Hindu philosophy author, expressed his objection to Vikraman’s statement and said,
Shri Krishna’s relationship with the Gopis was not illicit but was a spiritual bond. Making such remarks about Hindu Deities is nothing but Hinduphobia. In this way, people try to belittle Hindu culture and beliefs. They make vulgar and offensive statements.

In June 2022, an FIR was filed by Delhi police against the All India Majlis-E-Ittehadul Muslimeen (AIMIM) chief Asaduddin Owaisi and 31 other people, which included Vikraman Radhakrishnan, for allegedly passing provocative remarks, which supposedly promote hatred among the different communities on social media. He, along with 31 other people, was booked under sections 153, 153A, 153B, 295A, 298, 504, 505 and 506 of the Indian Penal Code (IPC).

Reportedly, in April 2021, Vikraman was accused of sexually harassing a man on account of conducting an audition for a film. The victim alleged that Vikraman was a gay who called him at his place to take his audition, but instead, molested him. Sharing his experience with a meme page on Instagram, the victim said,
He called me in the name of audition to a house and made me act. Then he pushed me to the bed and sexually harassed me. I couldn’t do anything at that time. His friends later called and scolded him. He put away my shirt in a cupboard and locked it. I had to struggle to get my shirt back from him. He later begged me to not disclose this incident to anyone and that he would help me get a chance in films. Then he blocked me. I couldn’t do anything as many told me that he has many political connections and knows several bigshots. They told me that I won’t be able to do anything to him”.

Stooping to new lows @timesofindia. Isaignani @ilaiyaraaja is reduced to “a Dalit from Tamil Nadu”. This is what exactly the filthy BJP and it’s parivar wanted. pic.twitter.com/DruCVUazlt
— Vikraman R (@RVikraman) July 7, 2022