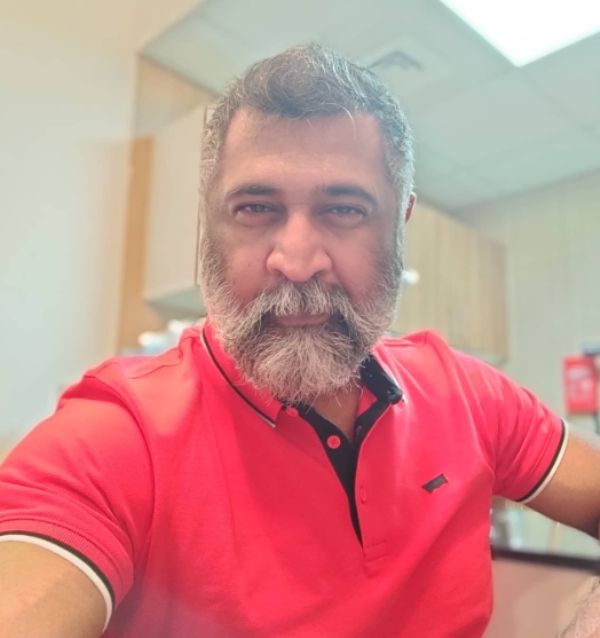 Adithya Menon is an Indian actor who appears in Tamil, Telugu, Kannada, and Malayalam films. He is best known for playing the role in Tamil films like Jay Jay as Sivaram (2003), Arinthum Ariyamalum as ACP Thiyagarajan (2005), Billa as Anil Menon (2007), and Telugu films like Mirchi as Babai (2013), Bluff Master as Pasupathi (2018), and Karthikeya 2 as Santanu (2022).

Anil Menon was born on Saturday, 6 April 1974 (age 48 years; as of 2022) in Mumbai. His zodiac sign is Aries. Adithya’s parents migrated to Al Satwa in Dubai, UAE, and he was brought up in Dubai. He completed his schooling at Our Own English High School in Dubai (1978-1992). After completing his schooling in Dubai, at the age of 18, Adithya shifted back to India. In 1992, he enrolled himself to earn a degree in civil engineering from the M. S. Ramaiah Institute of Technology in Bangalore.
Childhood picture of Adithya Menon

Adithya Menon belongs to a Malayali family, which hailed from Palghat in Kerala.

There is not much information about Adithya’s marital status. He has a daughter.
Adithya Menon with his daughter

Adithya Menon describes himself as an atheist.

While completing his engineering, Adithya worked as a radio host with Radio Midday. He appeared as a host for various college functions and events. After completing his graduation, in 1996, he started working as an event manager and hosted different ceremonies, stage shows, conferences, launch events, and fashion shows in Bangalore. After working as a host for a few years, Adithya realised his passion for acting, and he started participating in a few plays and stage shows in Bangalore. In an interview, he talked about aspirations of becoming an actor and said,
Acting is something I’ve always wanted to do. There’s a sense of satisfaction at being able to make a living by doing what I enjoy.”
In 2001, he shifted to Royapettah in Chennai to gain more acting opportunities.

Adithya Menon is the founder and CEO of Sustainable Solutions International, LLC, a privately owned company, which is responsible for developing technologies to optimize biomass energy and attain organic waste management.

Adithya Menon’s Bollywood debut film, Main Hoon Rajinikanth, was initially set to be released in 2014, but as the trailer of the film released on 15 September 2015, it landed into trouble. Rajinikanth filed a civil suit against the film’s production house, Varsha Productions, in the Madras high court to stop the release and screening of a film for using his name in the title, pictures, caricature, and his style of delivering dialogue in the film without any prior authorisation.
Poster of the Bollywood film Main Hoon Rajinikanth
Rajinikanth alleged that the film was promoted as his biopic, which might defame him and offend his fans. However, the film’s director, Faisal Saif, denied the allegation and claimed that apart from the name, he hasn’t used any kind of image, caricature, or personality attributes of Rajinikanth in the film. He even held a special screening of the film for Rajinikanth, and his daughter, Soundarya Rajinikanth, to prove that there was nothing objectionable related to him in the film. On 16 January 2015, a stay order was issued by the court against the release of the film as it offended the right to privacy and dignity of Rajinikanth. On 3 February 2015, the court announced the final verdict in favour of Rajinikanth and asked the makers of the film to remove Rajinikanth from the title, any kind of picture, caricature, or his style of dialogue delivery from the film. Later, the film’s title was changed to Main Hoon (Part-Time) Killer and it was released on 22 May 2015 across North India by Dimension Pictures. However, to avoid legal disputes, the film was not released in South India. In an interview, on being asked about the ongoing legal dispute between the production house and Rajinikanth regarding the release of the film, Adithya replied,
Our film is a tribute to the ‘thalaivar’ (Rajinikanth). It’s a comedy satire that will leave audiences in splits. Nobody would dare to show Rajini sir in bad light through a film. How could we possibly do it. Besides the name, there’s nothing in our film that defames Rajini sir. I’m sure when people watch the film, they’ll realize it’s a clean comedy entertainer. I hope we get to release our film smoothly. We have completed shooting. My director and producer will take a final call on this matter.