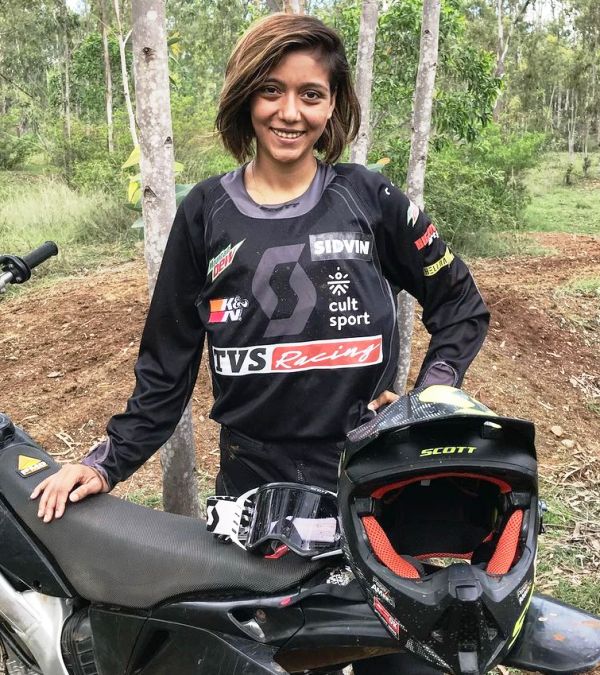 Aishwarya Pissay is a professional Indian motorcycle racer who competes in road racing, dirt track racing, and cross-country rallies. In 2019, she became the first-ever Indian motorsports athlete to win a world title in motorsports when she secured the first position at the FIM Bajas World Cup in the women’s category in Varpalota, Hungary.

Aishwarya Pissay was born on Monday, 14 August 1995 (age 27 years; as of 2022) in Bangalore, Karnataka, India. She attended Mahila Seva Samaja Senior Secondary School, Bengaluru. Aishwarya first realised her passion for biking at 18. She was kicked out of the house by her father for failing Class XII following which she started going on bike trips with friends. In an interview, while talking about the same she said,
I did not do well in Class XII and my father kicked me out of the house. I went to stay with my mother. It gave me time to do some part-time work and study; I also started riding the bike during this time. Soon, I started taking weekend bike trips with friends.”
She pursued BA in psychology at Surana College in Bengaluru. In 2015, she started training at Apex Racing Academy in Coimbatore and decided to pursue a career in professional racing and biking. Initially, her family wasn’t supportive of her decision to become a motorcycle racer. While recalling her family’s reaction to her career choice at the beginning, she said,
Coming from a conservative family with no background of racing, it wasn’t the easiest of career choices. My grandfather had expected me to go for a regular job and so did my father, who said that I would not make anything of my life. It was my mother, who let me discover myself and allowed me to follow my passion.”
In 2017, she received training from California Superbike School in Chennai, Tamil Nadu.

Aishwarya’s parents separated when she was nine. She has a younger brother.
A childhood picture of Aishwarya Pissay with her parents

Although Aishwarya was born and brought up in Bengaluru, her roots are in Maharashtra.

In 2017, TVS Racing signed Aishwarya Pissay on board as a factory racer. In the same year, she participated in a string of competitions including the Indian National Rally Championship (INRC), Raid De Himalaya, Dakshin Dare, TVS Apache Ladies One Make Championship, etc.   In 2018, she became the first Indian woman to participate in the rally raid Baja Aragón in Teruel, Spain. The event also marked her international rally debut. At the rally, she was a part of a four-member squad comprising of brothers Adrien Metge and Michael Metge from France and Spaniard Lorenzo Santolino. That rally ended prematurely for Aishwarya as she crashed and suffered from a ruptured pancreas in the process. In 2018, she was the only female rider to participate in the “Xtreme” race category. In 2019, she created history in Indian motorsports with her win at FIM World Cup. During the championship, Pissay won the first round in Dubai, clinched the third spot in Portugal, fifth in Spain, and fourth in the Hungarian Baja, between Aug 9 to 11. She finished with a tally of 65 points, just four ahead of Portugal’s Rita Vieira in the final overall standings for women. Based on the total points earned from all four rounds, Aishwarya won the World Cup in the women’s category. She also finished second with 46 points, behind championship winner Tomas de Gavardo (60 points) of Chile, in the junior category in which both men and women competed. In 2022, at Baja Aragon, the fourth round of the FIM Bajas World Cup, Pissay was a part of the Sherco TVS Rally Factory team which comprised of four riders, Lorenzo Santolino, Rui Gonçalves, Harith Noah, and Pissay.

In 2014, Aishwarya’s first appeared on TV when she participated in MTV’s ‘Chase the Monsoon’- an 8000km road ride from Rann of Kutch in Gujarat to Cherrapunji in Meghalaya in 24 days. In 2022, she appeared as a contestant on the show Bigg Boss Kannada Season 9. She was the first contestant to get evicted from the house in the show.
Aishwarya Pissay (centre) in Bigg Boss Kannada Season 9