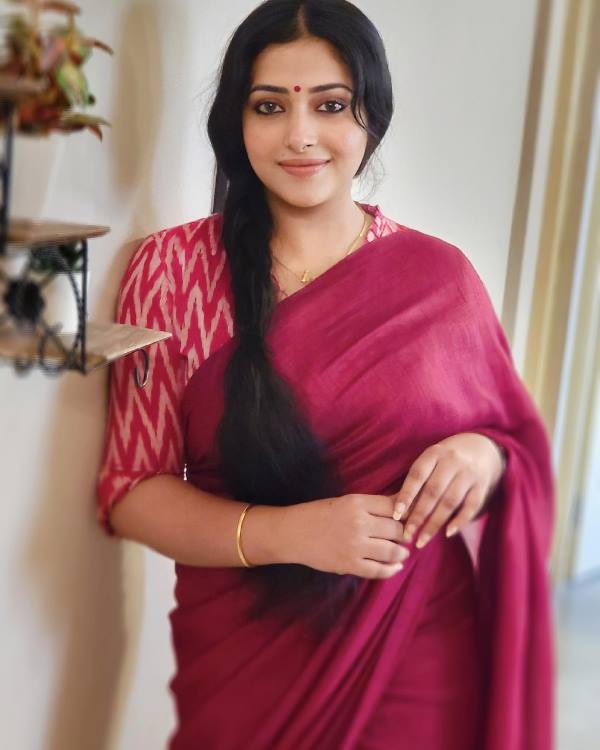 Anu Sithara is an Indian actress acting predominantly in the Malayalam film industry. She is best known for her roles in films such as Ramante Edanthottam (2017), Captain (2018), and Oru Kuttanadan Blog (2018).

Anu Sithara Pulivetti Salam or Anu Sithara P. S. was born on Monday, 21 August 1995 (age 27 years; as of 2022) in Kalpetta, Wayanad, Kerala. She is a professionally trained dancer and pursued her higher studies with Mohiniyattan as her main subject at the Kerala Kalamandalam. She is passionate about dancing and started a dance school (Navarassa) at her home. In an interview, she revealed that her mother’s friend, Renjini, was instrumental in Anu getting cast for the 2013 Malayalam movie, Pottas Bomb. Renjini had forwarded Sithara’s photos to the movie crew, and Anu was invited to the auditions and landed the role.
A childhood picture of Anu Sithara

Anu Sithara married her long-term boyfriend, Vishnu Prasad, in 2015. In an interview, she revealed that she met him for the first time when she was studying in plus two; though at first, she was sceptical of falling in love with him, they did. They had to convince both families for more than a year until their parents permitted them to marry each other. She acknowledged her husband, Vishnu, and his parents for supporting her acting career.
Anu Sithara with her husband, Vishnu

In an interview, she revealed that since her childhood, she had wanted to be an actress; however, her debut in the film industry was unexpected. She predominantly acts in Malayalam films, having acted in Tamil films too.

Anu Sithara made her debut in the Malayalam film industry as a child artist with Suresh Achoos’s directorial Pottas Bomb (2013).
Anu Sithara (third from left) during the launch of Pottas Bomb (her debut movie)
She did a cameo as ‘young Thulasi’ in the 2013 Sathyan Anthikad’s Malayalam romantic comedy, Oru Indian Pranayakadha; she appeared in various movies, and Anu Sithara was cast as ‘Shahina’ in Happy Wedding, which was released in 2016. Her breakthrough came in 2017 when she was cast in the lead role (Malini) of Ramante Edanthottam, Ranjith Sankar’s romantic drama. Anu Sithara was the heroine starring opposite famous Malayalam actor Kunchacko Boban. She won critical appreciation and accolades, for the portrayal of Malini, in Ramante Edanthottam.
Anu Sithara with Kunchacko Boban (Left) and Ramesh Pisharody (Right) from the set of Ramante Edanthottam
She was cast as the lead heroine in Prajesh Sen’s directorial debut, the 2018 Malayalam-language biographical sports drama, ‘Captain’, based on the life of former Indian national football team captain, the late V. P. Sathyan. Anu Sithara played the role of Anitha Sathyan, wife of V.P Sathyan, and won plaudits.
Anu Sithara as Anitha Sathyan, with Jaysurya playing V P Sathyan in Captain movie
Anu Sithara was cast as one of the lead cast of ‘Oru Kuprasidha Payyan’, the 2018 Malayalam-language crime thriller film directed by Madhupal. She played the role of ‘Jalaja’ and won critical appreciation and accolades. In 2019, Sithara was cast as ‘Manikyam’ for M. Padmakumar’s Malayalam-language period action film, ‘Mamangam’, with Mammootty playing the lead role. She played the role of ‘ Merin’ in Jeethu Joseph’s Malayalam-language mystery thriller, 12th Man, which was released in 2022.

Anu Sithara made her debut in the Tamil film industry with Veri (2015). She was part of the 2019 Tamil movie, ‘Podhu Nalan Karudhi’, and played the role of ‘Malli’ in the 2021 Tamil-language thriller, ‘Vanam’, directed by Srikantan Anand.

In 2017, Anu Sithara appeared as a dance reality tv show judge, D4 Dance Junior v/s Senior, which was telecasted on the Mazhavil Manorama Channel. In 2021, she made a dance performance in Bigg Boss (Malayalam season 3). Anu Sithara co-hosted the Mazhavil Manorama 2021 Onam special cookery show along with Deepthi Vidhu Prathap. In 2022, she participated in ‘Flowers Oru Kodi’, an infotainment program telecasted by Flowers TV.