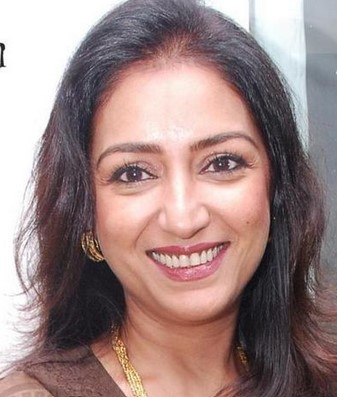 Anuradha Patel is a prominent Indian actress. She is one of the highly acclaimed Indian actresses of the 1980s and is recognized for her performances in the films Utsav (1984), Phir Aayee Barsaat (1986), Dharam Adhikari (1986), Sadaa Suhaagan (1986), Ijaazat (1987), and Rukhsat (1988). The veteran Hindi film actor Ashok Kumar was her maternal grandfather. She is the wife of the famous Indian actor, Kanwaljit Singh, and the daughter of Bharati Jaffery, a noted Indian actress.
Anuradha Patel with her husband, grandfather, and sons

In 1988, Anuradha Patel got married to Indian actor Kanwaljit Singh. The couple has two sons named Sidharth, who is a musician, and Aditya, who is a painter. Anuradha and Kanwaljit Singh have a goddaughter named Mariam Singh Barakzoy. In 2009, they publicly announced that Mariam Barakzoy was a member of their family. Soon after the news floated on many social media platforms, Kanwaljit Singh clarified in a media interview that they had not legally adopted Mariam, but she was a member of their family. He said,
We have a daughter Mariam Barakzoy who now calls herself Mariam Singh Barakzoy.”
He added that the bond between his three children was very well, and Mariam had equal rights in his family. He said,
Today, I have three children. Everything that I have belongs to Mariam as well. Mariam, Siddharth, Aditya and I bond very well. Life is all about attachment.”
Anuradha and Kanwaljit Singh narrated that when Mariam was eight years old she travelled to America from Afghanistan, and she met Kanwaljit Singh at Delhi airport in a guest house. They lost contact with each other after this meeting, but Mariam again contacted Kanwaljit Singh through an email after four years. He recalled,
I don’t know how Mariam got my e-mail id and wrote to me that she regarded me as her dad. Actually, she had a stepfather who didn’t treat her too well.”
Thereafter, Anuradha and Kanwaljit Singh clarified that Mariam had a stepfather who did not treat her well, and she liked to call Kanwaljit as her father. Since then, both of them were looking after Mariam’s needs. However, he claimed that Mariam worked in Santiago in the United States and is an independent girl.
Anuradha Patel and Kanwaljit Singh’s daughter Mariam (middle) with their sons

According to some media reports, Anuradha Patel got engaged to Indian actor Mayur Verma in 1983. Later, she was in the news when her name was associated with actor Marc Zuber.

Anuradha Patel marked her Bollywood debut with the film Love in Goa in 1983 along with the Indian actor Mayur Verma in the lead role. After that, she went on to appear in many Hindi films including Utsav in 1984, Phir Aayee Barsat in 1985, Dharm Adhikari and Sadaa Suhagan in 1986, Ijaazat in 1987, and Rukhsat in 1988. She acted in the shelved film Sarkar in 1985. She appeared in the popular song “Mann Kyon Behka Re Behka” from the film Utsav along with Indian actress Rekha, and the song was a super hit. The other cast of the film included Shashi Kapoor and Shekhar Suman.
Anuradha Patel in a still from the song Mann Kyu Behka Re Bekhka
In 2008, Anuradha Patel was cast in the film Jaane Tu Ya Jaane Na in which Indian actors Genelia D’ Souza and Imran Khan were in the lead roles.
Anuradha Patel (right) dancing in a still from the film Jane Tu Ya jane Na
In 2011, she worked in the film Khaap with veteran Indian actor Om Puri. She then worked with actor Salman Khan in the Hindi film Ready. In 2007, Anuradha Patel appeared in the film Dus Kahaniyan. In 2010, she was seen in Aisha and It’s My Life. In 2013. she worked in the film Rabba Mai Kya Karun and Dhantya Open in 2017.

In 1987, Anuradha Patel was nominated for the Filmfare Award for Best Supporting Actress for the film Ijaazat. In 2018, she was honoured with the Perfect Achievers Award For “Best Personality Development” Classes, and the organiser of the award was Gurubhai Thakkar, an Indian filmmaker.