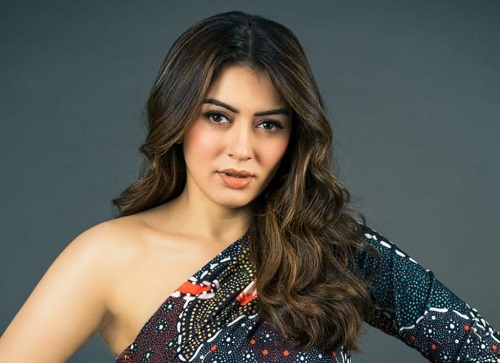 Hansika Motwani is an Indian actress and entrepreneur, who has mainly acted in Telugu and Tamil films. She came into the limelight as one of the kids in the Hindi film ‘Koi… Mil Gaya’ (2003).

Hansika belongs to a Sindhi family.

Her father, Pradeep Motwani, is a businessman. Her mother, Mona Motwani, is a dermatologist. When Hansika was very young, her parents got separated.  Her elder brother, Muskaan Nancy, works in the corporate sector, and he is married to the Indian TV actress Muskaan Nancy.
Hansika Motwani with her mother and brother
Hansika Motwani with her mother, brother, and sister-in-law

In 2013, Hansika announced her relationship with the South Indian actor Silambarasan Thesingu Rajendar aka Simbu after dating each other for a few years. After dating each other for a few years, the couple got separated. Reportedly, Hansika was not happy with Simbu’s close friendship with the Indian actress Nayanthara.  During an interview, when Simbu was asked about the breakup, he said,
It’s been two years since my film release. I have learnt a lot in this period. Everyone has his own struggles, not that I am the only one who was suffering in life. They say that I am a born with silver spoon, but in the two years I experienced the difficulties faced by common man. I give all the money that I earn to my mother. In the two years, there were no films and I was completely broke. It was difficult for me to ask my mom to lend me money for survival. I lost everything. Offers went away, films did not release and nothing was working in my favour.”
Hansika Motwani with her ex-boyfriend Silambarasan Thesingu Rajendar
He further talked about Hansika, he said,
I thought my girlfriend (Hansika) will be with me, but she ditched me when I was struggling. (Laughs). I was hoping to forget my pain by looking at my child’s face after getting married, but that did not happen…I think the God is testing me. Everything had gone, but I only have this life. Then I realised that there is a purpose why I am still alive. In spite of my highs and lows, fans are still with me.”
Hansika then met a Mumbai-based businessman Sohail Kathuria, who is also a partner in Hansika Motwani’s event management partnership firm ‘Hansika Motwani Events LLP.’ While working together, they became friends and soon, fell in love with each other. In November 2022, Hansika Motwani shared a few pictures of her and Sohail in which Sohail was seen proposing to Hansika for marriage. The proposal was held at the Eiffel Tower in Paris.
Sohail Kathuria while proposing Hansika Motwani
In November 2022, many media sources quoted that the couple would probably have a destination wedding at Mundota Fort and Palace in Jaipur on 4 December 2022. Sohail was earlier married to a girl named Rinky, and Hansika was one of the guests at their wedding held in 2016.
Sohail Kathuria’s wedding picture with his first wife
Hansika Motwani at Sohail Kathuria’s first wedding function

In 2010, she converted to Buddhism. In an interview, while talking about it, she said,
The best way to effectively de-stress is to chant ‘Nam Myo Ho Renge Kyo’. I chant every morning. This practice strengthens compassion in my mind. For me, Buddhism aims to awaken people to the limitless potential and value of their own lives. Through chants, one can connect with God and can experience real peace of mind and spiritual well-being. Chanting helps me strike a balance. I am now able to manage stress better and am generally more positive when dealing with people.”

At the age of 8, she did her first TV commercial for the Hyundai Santro car along with the Indian actor Shah Rukh Khan. He received Rs 5000 for the ad. She then featured in TV commercials for brands like Nirma Beauty, Aroma Milk, and Girias.

In 2003, she made her Bollywood debut as a child actor with the horror film ‘Hawa’ in which she played the role of Sasha. The film failed to do well at the box office.
Hawa (2003)
In the same year, she appeared in the Hindi film ‘Koi… Mil Gaya’ as Priya.
Koi… Mil Gaya (2003)
In 2004, she acted in the Hindi films like ‘Jaago,’ ‘Hum Kaun Hai?,’ and ‘Aabra Ka Daabra.’
Hansika Motwani in Aabra Ka Dabra

Hansika made her Kannada film debut with the 2008 film ‘Bindaas’ in which he played the role of Preethi.
Bindaas (2008)

Hansika has also appeared in a few music videos like “Booty Shake” by Tony Kakkar and Sonu Kakkar (Hindi; 2021), “Mazaa” by B Praak (Hindi; 2021), and “Shreaam Pagal” by Sunidhi Chauhan (Punjabi; 2022).
Hansika Motwani in Booty Shake

In 2015, a nude video of a girl went viral, who looked like Hansika Motwani. Later, when Hansika got to know about the video, she clarified in one of the TV interviews that the girl in the video was not her but her doppelganger. She said,
Some people feel that actress is spending a luxurious life. But I am working round the clock and putting in a lot of hard work to entertain the audience. I don’t understand why some indulge in heinous acts like the morphing of pics. For me spreading obscene videos by morphing is worse than rape.”
A still of Hansika Motwani’s doppelganger’s video

In 2003, Hansika appeared as a child actor in the Hindi film ‘Koi… Mil Gaya,’ and within four years, she was seen playing the role of a lead actor in the 2007 Hindi film ‘Aap Kaa Surroor’ (2007). People criticised her for using growth hormones to make her film debut as a lead actor.
Hansika Motwani’s photos at the age of 12 and 16

Case Filed for the Poster of the Film

In 2022, she was seen playing the lead role in the Tamil film ‘Maha.’ In the poster of the film, Hansika was seen smoking chillum while wearing a get-up of a saadhvi. She received huge criticism for the same. A case was also filed against her and Jameel, the director of the film. Later, while talking about the controversy, Jameel said,
Guys, saw all ur coments,as a director of the film my intention was 2 just create sumthing unique n not to knowingly hurt anybody’s sentiments related 2 caste or religion,I believe in humanity n not in Hindu-muslim,so pls dont create caste and religion angle ?? @ihansika #Maha (sic).”
Maha film poster