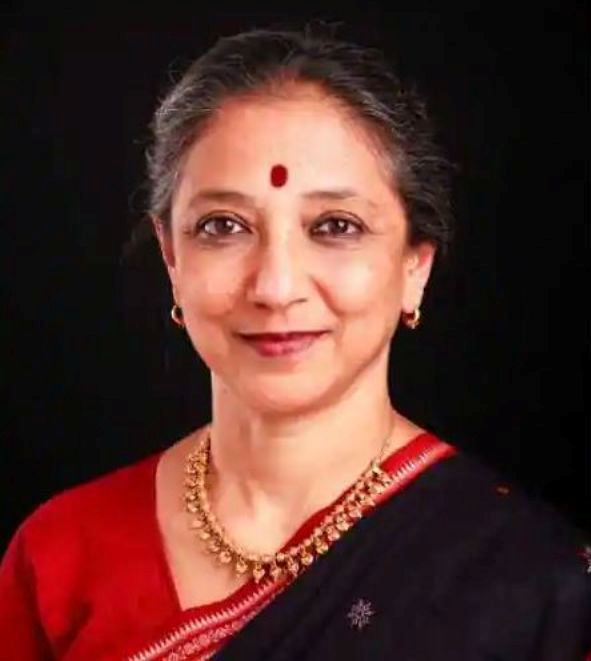 Leela Samson is an Indian Bharatanatyam dancer, choreographer, writer, and actress. She is the founder of Spanda Dance Company, a dance group which presents choreographies conceived by Leela Samson. She is well known for her expertise in the Indian classical dance form Bharatanatyam, and for presenting the same in various diverse compositions.

Leela Samson was born on Sunday, 6 May 1951 (age 71 years; as of 2022) in Coonoor, Nilgiris, Tamil Nadu. Her zodiac sign is Taurus. She completed her schooling at Besant Theosophical High School, Varanasi, India. Leela completed her Bachelor of Arts degree in English from Sophia College for Women in Mumbai, Maharashtra.
Childhood picture of Leela Samson

Leela’s father Vice Admiral Benjamin Abraham Samson, was a retired officer, who served as the Flag Officer Commanding Indian Fleet in the Indian Navy from 8 January 1964 to 31 May 1966.  Benjamin was the first Naval Officer to serve as the National Defence Academy’s Commandant, who served in Khadakvasla between 1959 and 1962. He died on 18 March 2008 in Chennai, Tamil Nadu. Her mother’s name is Laila Samson.
Leela Samson with her parents
Leela’s father was of Jewish origin, and her mother was of Catholic origin. Leela has two brothers and two sisters; one of her sisters died at the age of six.
Leela Samson (extreme right) with her parents and siblings

Leela Samson is unmarried. In an interview, Leela revealed that she did not marry because she never found the man as per her interests.

Leela’s father was of Jewish origin, and her mother was of Catholic origin. But, Leela Samson follows Hinduism. In an interview, she talked about it and said,
By virtue of being a dancer, I am a Hindu in philosophy. Even my family has acknowledged that. It does not matter what people have to say about me,”

In 1961, Leela, at the age of nine, was sent by her father to Kalakshetra, art and cultural academy, so that could be exposed to Indian classical dance and music, and learn the same. Leela received her training from the founder of Kalakshetra, Rukmini Devi Arundale, who was a renowned Bharatanatyam dancer and choreographer. Leela started her career as a Bharatanatyam soloist. Later, she started tutoring the Indian classical dance form at Shriram Bharatiya Kala Kendra, Delhi, and Gandharva Mahavidyalaya, Delhi. Initially, Leela performed solo at various dance events and occasions. Later, she started performing with groups at leading festivals of dance in India and abroad like Europe, Africa, and America.

Leela authored the book titled ‘Rhythm in Joy: Classical Indian Dance Traditions,’ which was published in 1987 for Lustre Press, and was based on the classical dance forms of India. In 2010, Leela published a biography on the life of her mentor titled ‘Rukmini Devi,’ which was derived from her letters, which Leela found in the Kalakshetra records.

In April 2005, Leela was appointed as the director at the Kalakshetra foundation by the Congress-led UPA government in April 2005. On 30 April 2012, Leela resigned from the post of director, because a petition was filed against her, as she had crossed the age limit for the related post as per the government norms. The petition was filed by former Kalakshetra teacher C.S. Thomas in which he reported that Leela continued to serve as a director even though she had turned 60. In an interview, Leela talked about her resignation from the post and said,
Through a PIL, an ex-Kalakshetra teacher had challenged my continuance as director after I turned 60. If I do not have the support of the ministry, chairman and the board in this matter, I see no reason to stay on,”

Favouritism by the Congress-led UPA government

In 1980, Leela Samson taught dance to Priyanka Gandhi in New Delhi. It was rumoured that Leela shared a good relationship with Sonia Gandhi. It was rumoured that Leela has been favoured by the Congress-led United Progressive Alliance (UPA), as she held some key positions including Chairperson of CBFC, Director of Kalakshetra Foundation, and Chairperson of Sangeet Natak Akademi, etc. In an interview, Leela denied the accusation and said,
I have wondered whether every other tutor of the Gandhi children were similarly rewarded! Priyanka came to a little dance class I took in Delhi when she was six years old. I have taught other children who came from other backgrounds. No concession was granted to her. I am not close to the Gandhi family except that I taught their child and that they were normal parents who wanted her, in spite of all the tragedy of their childhoods, to lead as normal a life as they could give them and for her to be involved in the beauty of our arts. They were gracious and I was happy to know their child. I have always had a special feeling for all my students. She is one among them. I have also had, by the way, children of people who were in the BJP and who remain close to the present government.

Criticized for not worshipping Lord Ganesha

Removal of Lord Ganesha’s Idols and Nataraja Murtis from Kalakshetra

In 2008, after being appointed as the Director of Kalakshetra, art and cultural academy in Chennai, Leela got Lord Ganesha’s idols and Nataraja Murtis removed from the campus. People started bashing Leela for being an ‘anti-Hindu.’ In an interview, Leela responded to being remarked as an anti-Hindu and said,
Hinduism is not a religion, but a way of life, a philosophy. I live the life of a Hindu. No one can take that away from me. I did not have to convert to be that way. I simply am. It also does not make me less Christian or less Jewish. Just more appreciative.

Leela Samson resigned from the post of chairperson of the Censor Board of Film Certification on 15 January 2015. Reportedly, the reason for her resignation was the clearance of the film The Messenger of God for release by the Film Certification Appellate Tribunal (FCAT). The film was based on the controversial Dera Sacha Sauda chief, Gurmeet Ram Rahim Singh. As per sources, Leela was not in favour of the film’s release, and she mentioned that there was interference and intimidation by the organization’s officers appointed by the BJP government. In an interview, talking about her resignation as the Censor Board’s chairperson, Leela said,
I have not watched PK or MSG. A panel of five members from cross sections of the society watch a movie and decide its certification. I do not know why MSG was not allowed to release. Even the revision committee said ‘no’ to the movie and it does not reflect on me. Fact of the matter is, we were just hanging on there and waiting for a new body to be constituted. As it had been a year since my term ended, I decided to resign.”
In September 2012, while serving as a director at CBFC, Leela released the Bollywood film Kamaal Dhamaal Malamaal after removing the offensive scenes, which hurt the religious sentiments of Catholic community. However, during the release of the Bollywood film PK, protests were made to delete objectionable scenes from the movie, which were against the religious sentiments of Hindus. But, Leela passed the film without any cuts. In an interview, Leela explained her reason behind releasing the film PK and said,
Every film may hurt religious sentiments of somebody or the other. We can’t remove scenes unnecessarily because there is something called creative endeavour where people present things in their own way. We have already given certificate to PK and we can’t remove anything now because it’s already out for public viewing.”
During her tenure as the chairperson of the Censor Board of Film Certification, Leela was accused with allegations of being an absentee chairperson. Leela, on being asked about the same revealed that board has not met for over a long period of time as the ministry did not provide adequate funds to organise the meeting of members. In an interview, she denied the allegations made against her and said,
For a job that does not give the chairperson even a sitting fee for a meeting, this is a case of adding insult to injury. I can say with a clear conscience that my board and I served with all the enthusiasm at our disposal.

In December 2019, the CBI booked Leela Samson, and four other officials, Chief Accounts Officer TS Murthi, Accounts Officer S Ramachandran, Engineering officer V Srinivasan, and Ravi Neelakantan, proprietor of CARD (Centre for Architectural Research and Design), on account of corruption, irregular appointments, unfair granting of contracts, and financial irregularities. It was alleged that unproductive expenditure has been made on the renovation of the Koothambalam auditorium of Kalakshetra Foundation, Chennai in 2009. In 2016, the Chief Vigilance Officer of the Culture Ministry conducted an inquiry, and it was alleged that the foundation had spent Rs 62.20 lakh more than the estimated amount on the Rs 7.02-crore project. Being the director of the foundation, Samson was allegedly responsible for the losses incurred by the Foundation on account of not opting for open tendering. Apart from renovation processes, the report showed an irregular appointment of 16 employees at the institution, which were not as per the norms prescribed for the same.