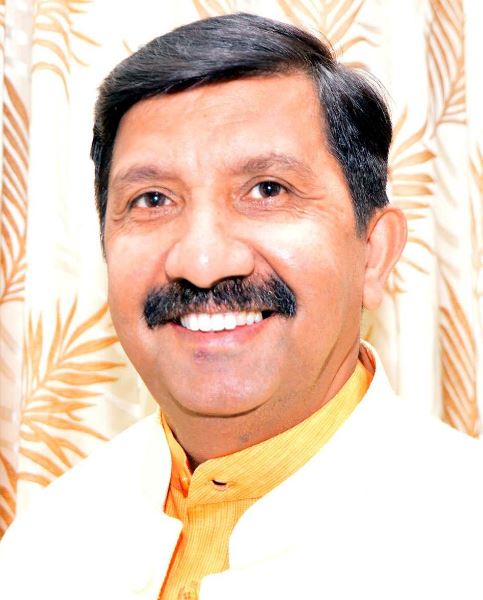 Mukesh Agnihotri is an Indian journalist-turned-politician and a member of the Indian National Congress. He is a five-time MLA from the Haroli (erstwhile Santokhgarh) Constituency. On 11 December 2022, Mukesh got appointed as the first Deputy Chief Minister of Himachal Pradesh.

Mukesh Agnihotri was born on Tuesday, 9 October 1962 (age 60 Years; as of 2022) in Sangrur, Punjab. His zodiac sign is Libra. He grew up in Una, where he did his schooling. He holds an M.Sc. in Mathematics and a Post Graduate Diploma in Public Relations and Advertisement.

Mukesh’s father Pandit Omkar Chand Sharma is a politician and member of the Indian National Congress, who served as the Vice Chairman of the Himachal Pradesh Agro Packaging Department during the Virbhadra Singh government in Himachal in 1993. Omkar Sharma contested the 1998 legislative assembly elections on a Congress ticket but lost to the Bharatiya Janata Party candidate Pandit Jaikishan Sharma. Omkar had also served as the District Public Relations Officer (DPRO) of Himachal Pradesh. Mukesh’s elder brother, Rakesh Agnihotri, is a doctor. He has three sisters, Sunita Agnihotri, Simmi Agnihotri, and Aastha Agnihotri. All of them are doctors.
Mukesh Agnihotri with his siblings

Mukesh Agnihotri is married to Simmi Agnihotri, who is posted as a professor in the Public Administration Department of Himachal Pradesh University. Together, the couple has a daughter named Aastha Agnihotri.
Mukesh Agnihotri with his wife and daughter

Mukesh Agnihotri started his career in journalism as a news correspondent with the Hindi daily Veer Pratap in Shimla. He worked there for a while and then joined Janasatta (Indian Express Group) in Shimla as a Senior Correspondent. He worked there for around 10 years and later moved to Delhi, where he was promoted as Bureau Head. Three years later, he resigned from his position to enter politics. Being a journalist, he served as a member of various committees including the Press Accreditation Committee (H.P. Govt.), the State Press Advisory Committee, the Press Gallery Committee State Legislative Assembly, and the Govt. Pahari Language Committee. He also served as the General Secretary of the Press Club (Shimla) and PCC and Chairman of Media Cell PCC.

While working as a journalist in Delhi, Agnihotri’s closeness with Congress leader Virbhadra Singh increased after which he decided to join the Indian National Congress. After seeing his involvement in the party matters, Virbhadra Singh advised Mukesh to contest the Legislative Assembly elections. In 2003, Mukesh Agnihotri was elected to the Legislative Assembly from Santokhgarh Constituency. From March 2003 to August 2005, he served as the Chief Parliamentary Secretary (CPS) and Chairman of the Housing Board in the Virbhadra Singh-led government.
Mukesh Agnihotri addressing a huge gathering of Congress workers at Kangar, Haroli
In 2007, he secured a majority and won the seat for the second time on a Congress ticket. During his second term, Mukesh served as a member of the Subordinate Legislation, General Development, Public Accounts, and Human Development Committees. After delimitation in the year 2008, Santokhgarh was converted into the Haroli Assembly Seat. In 2012, Agnihotri was re-elected to the Haroli Assembly Seat for the third time. Between 2012- 2017, Mukesh was inducted into the Cabinet as Industry Minister with an additional charge of Labor & Employment, Parliamentary Affairs, and Information & Public Relations. During his term, he worked hard to solve the issues of the people of Haroli and provide good education facilities to students.
Mukesh Agnihotri at the inauguration of the third government college in Haroli
In 2017, Mukesh contested and won the Haroli Assembly Seat for the fourth consecutive term. However, this time the government was formed by BJP. The following year, Agnihotri was made the Leader of the Opposition, and he fiercely opened a front against the Jairam government. In 2018, he was also nominated as a member of the Business Advisory Committee in the Himachal Pradesh Legislative Assembly. During the 2022 state elections, the leaders of the Indian National Congress made Agnihotri a star campaigner. Mukesh carried out several rallies across the state to campaign for the Congress candidates. Agnihotri was elected to the fourteenth Legislative Assembly from the Haroli Constituency on 8 December 2022.
Mukesh Agnihotri during election campaigning in Haroli, Una
Subsequently, Mukesh was appointed as the Deputy Chief Minister of Himachal Pradesh. On 11 December 2022, Agnihotri took the oath as the Deputy Chief Minister of Himachal Pradesh at the historic Ridge in Shimla. Many senior Congress leaders including the party chief Mallikarjun Kharge, chairperson of the Indian Youth Congress Rahul Gandhi, and the general secretary of the All India Congress Committee in charge of Uttar Pradesh Priyanka Gandhi were present at the oath-taking ceremony.
Mukesh Agnihotri taking oath as the Deputy Chief Minister of Himachal Pradesh at the historic Ridge in Shimla
Before becoming an MLA Mukesh served as the general secretary and president of Congress’s Himachal unit’s media cell.

Note: The given estimates of movable and immovable assets are according to the year 2022. It excludes the assets owned by his wife and dependents (minor).