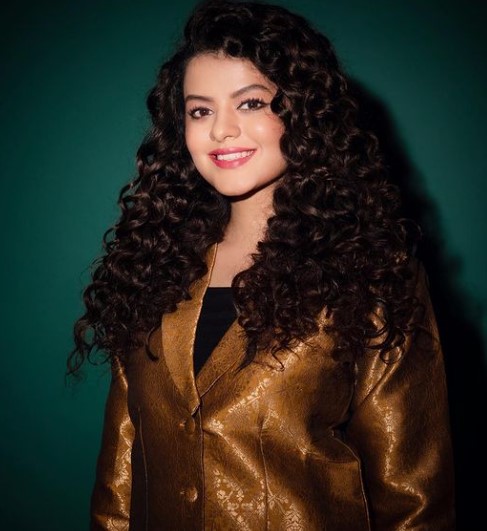 Palak Muchhal was born on Monday, 30 March 1992 (age 30 years; as of 2022) in Indore, Madhya Pradesh, India. Her zodiac sign is Aries. She completed her school education at Queens College in Indore. In a media conversation, in 2013, she disclosed that she was pursuing a bachelor’s degree in commerce from a college in Indore. In the same talk, Palak Muchhal remembered her childhood days when she was  two-and-a-half years old and gave a stage performance at her uncle’s wedding and sang the iconic song ‘Chalri Sajni Ab Kya Soche.’  She recalled,
I don’t come from a musical background. I come from a Marwari family and nobody in my family sings. I started singing when I was two-and-a-half. During the sangeet function of my uncle’s wedding, I went to the stage and sang, ‘Chalri Sajni Ab Kya Soche’, which is an iconic song.”
Palak Muchhal’s first performance on stage

Her father’s name is Rajkumar Muchhal, and he works as an accountant in Indore.
Palak Muchhal with her father
Her mother’s name is Amita Muchhal.
Palak Muchhal with her mother
Palak Muchhal has a younger brother named Palash Muchhal, who is a musician and a renowned face in the Indian music industry. According to media sources, Palak and her brother frequently organise stage shows across India and abroad to collect funds so that they could help the poor and needy children in financing their medical treatment, especially heart diseases. Since 2000, they are organising together charity shows titled “Dil Se Dil Tak” (“From heart to heart”) in Hindi and “Save Little Hearts” in English while travelling across India and abroad.
Palak Muchhal with her brother, Palash Muchhal

Palak Muchhal is not married.

Palak Muchhal is in a relationship with Indian musician Mithoon since 2013. They worked together on the songs for the film Aashiqui 2 in 2013, and reportedly, since then, they are dating each other.
Palak Muchhal with Mithoon
In 2022, Palak Muchhal and Mithoon announced their marriage dates on various social media platforms. On 29 October 2022, it was in the news that they would tie the knot on 6 November 2022 in a five-star hotel in Mumbai.
Palak Muchhal and Mithoon

An autograph by Palak Muchhal

Palak Muchhal began singing when she was two-and-a-half years old; however, she received the opportunity to show her talent when she participated as a child artist singer in Kalyanji-Anandji’s Indian reality singing show Little Star when she was four years old in 1996. Little Star was a group of young singers, who used to travel across India and the globe during this reality show.
Palak Muchhal while singing on stage in her childhood
At the age of nine, in 2001, Palak Muchhal released her first album “Child For Children” in a collaboration with Tips Music. In 2003, she released her second album titled Palken and went on to release Aao Tumhe Chand Per Le Jaaye, Beti Hu Mahakal Ki, and Dil Ke Liye. In 2011, she released her music album Jai Jai Dev Ganesh under the T-Series banner.

Palak Muchhal then decided to make her career in the Indian entertainment industry and shifted from Indore to Mumbai in 2006. In October 2011, she received the chance to sing the title song of the film Damadamm. In the same year, she lent her voice to the song “Pyaar Ke Silsile” from the film Na Jaane Kabse. In the following year, her name was recommended to Indian filmmaker Aditya Chopra by Indian actor Salman Khan. In 2012, she sang the song Laapata in the film Ek Tha Tiger. This earned her huge recognition in Bollywood. Once, in a media talk, Palak Muchhal narrated that if Salman Khan had not recommended her name, then her career in Bollywood would have been delayed. She said that Salman Khan was the first person in Mumbai whom she met when reached Mumbai in 2006. She said,
When I came to Mumbai from Indore, I thought I would have to struggle a lot for years. I had planned to go to offices and play my demo CD to ask for work, but I didn’t have to do anything of that sort. I came here and the first person I met was Salman Khan sir and he made me sing in his film.”
Palak Mucchal with Salman Khan
In 2013, Palak Muchhal earned huge popularity after she lent her voice to two songs in the film Aashiqui 2. In the film, she worked with the musicians Mithoon and Jeet Gannguli. The “Chahun Main Yaa Na” song from the film Aashiqui 2 was a chartbuster. In the same year, she made her Bangla film industry debut with the Bengali song “Tui Borsha Bikeler Dheu” from the film Rocky. In 2014, her song Jumme Ki Raat was a chartbuster hit, which she sung with the Punjabi singer Mika Singh. In the film Prem Ratan Dhan Payo, she sang many songs in 2015. In 2016, Palak Muchhal sang the song “Kaun Tujhe” in the film M.S. Dhoni: The Untold Story,’ which listed her among the top female songs of the year. Reportedly, she works and sings songs composed by Indian musicians Himesh Reshammiya, Gannguli, Mithoon, and Amaal Mallik. In 2018, she made her Kannada debut with the song “Enammi Enammi” with Vijay Prakash.
Palak Muchhal while singing a song

Palak Muchhal used to raise funds from a very young age for many charitable organisations, which primarily worked for the welfare and medical treatment of blind kids, victims of the 1999 Kargil War, heart patients, etc. During the Kargil war in 1999, when she was seven years old, she began singing songs at many shops in her hometown in Indore and collected rupees twenty-five thousand for the families of the martyrs. During the same year, Palak Muchhal organised a small stage show to arrange funds for the victims of the 1999 Odisha cyclone. According to Palak Muchhal, she liked saving a life through her singing during her childhood more than playing with friends. She cited in a media talk in 2007 that sometimes, she missed her normal childhood. She said,
At times… [I missed my normal childhood], but then, it dawns on me that even if I lose my childhood, it’s okay. Playing with friends is not more important than saving a life.”
Palak Muchhal collected around one million rupees in charity for the victims of the Gujarat earthquake in 2001. In July 2003, she financially helped the parents of a two-year-old Pakistani girl in her heart treatment.

In 2006, Palak Muchhal founded a charitable organisation titled “Palak Muchhal Heart Foundation,” which works in collaboration with the Bhandari Hospital in Indore, which grated this foundation a million rupees for its smoother financial operations. This foundation allows Palak Muchhal to attend the medical treatments of the small children she chants the Jain Navkar Mantra during the operations. Palak Muchhal wears her own surgical gown in the operation theatre. She and her parents do not receive any monetary funds from these charitable works; however, she likes to accept a doll for every child whose life was saved through her charity.
Palak Muchhal in operation theatres
According to media sources, Palak and Palash Muchhal saved 2200 lives till October 2020 through their charity shows.

In 2000, Palak Muchhal was honoured with the Pradhan Mantri Rashtriya Bal Puraskar In 2021, she earned a Doctorate Degree from the American University USA for Global Peace.
Muchhal with Sanjay Khan at 2nd Babasaheb Ambedkar Awards 2010