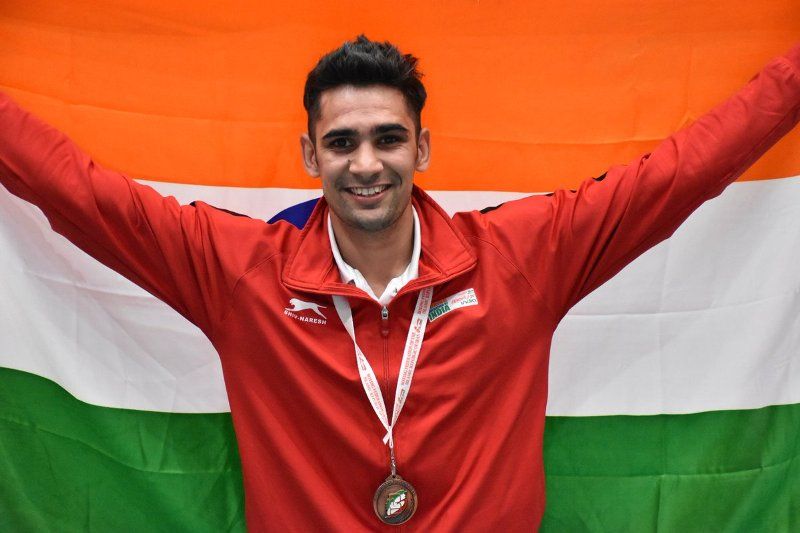 Rohit Tokas is an Indian boxer who is known for competing in welterweight boxing competitions. He won bronze medal in the men’s 67 kg category at Commonwealth Games 2022 in Birmingham.

Rohit Tokas was born on Sunday, 1 August 1993 (age 29 years; as of 2022) in Munirka Village, New Delhi. His zodiac sign is Leo. Rohit completed his graduation from Delhi College of Arts & Commerce, University of Delhi.

During his childhood days, Rohit had a great interest in boxing, and he would watch films based on boxing and WWE matches with his brother. When he was ten years old, his father enrolled him at the Baba Gangnath Boxing Academy, Munirka. Within a few months, Rohit lost his interest in boxing, and he started training for swimming. Later, while studying in school, Rohit was bullied by his seniors. Hence, he decided to train for boxing once again. During his school days, Rohit Tokas started his boxing career, and he participated in various boxing tournaments like Youth Men’s National Boxing Championship (2010), Cuban Youth Olympics (2011), and 1st Dr BR Ambedkar All India Men Boxing Tournament (2012). In 2013, Rohit participated in the China Open of Men Boxing Tournament in Guiyang, China. In 2015, Rohit decided to switch his category from 60 kg to 64 kg for his further boxing tournaments. In 2019, Rohit competed in the Asian Amateur Boxing Championship 2019 in Thailand.
Rohit Tokas during the Asian Amateur Boxing Championship 2019
In 2019, Rohit participated in the 4th Elite Men’s National Boxing Championship at Baddi, Himachal Pradesh.
Rohit Tokas at the 4th Elite Men’s Boxing Championship 2019
Rohit took part in the All India Inter Railways Championship in 2022, and he defeated Ishmit Singh, who represented Central Railway with a score line of 5-0 unanimous decision. In an interview, Rohit talked about his win over Ishmit and said,
It is an important year for me as we have both Commonwealth Games and Asian Games and this victory will surely boost my morale and will make me more confident and push me to train harder.”
In August 2022, Rohit participated in the Commonwealth Games 2022 in Birmingham. Rohit won the quarterfinal match against Mata’afa-Ikinofo Xavier of Niue during the men’s 63.5 kg-67 kg welterweight match, but he lost to Stephen Zimba of Zambia by a split decision of 2-3 in the semi-finals of the Commonwealth Games 2022.
Rohit Tokas during the men’s 67kg quarterfinals of Commonwealth Games 2022

Rohit Tokas is an employee at the Indian railways.