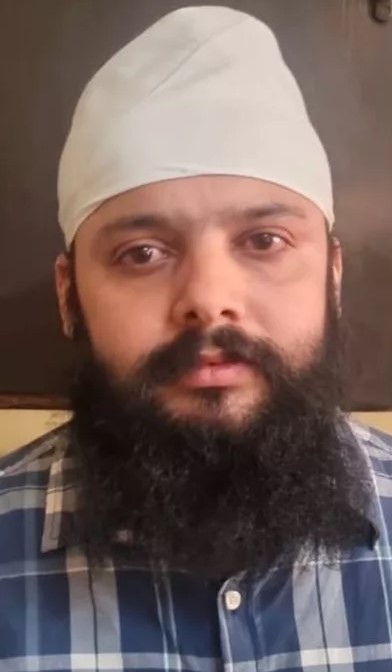 Sandeep Singh is a Punjab-based Sikh youth responsible for the assassination of Shiv Sena leader Sudhir Suri in Amritsar (Punjab). He is associated to ‘Waris Punjab De,’ a militant Sikh organization.

On the afternoon of 4 November 2022 (Friday), Punjab-based Shiv Sena leader Sudhir Suri was staging a protest outside Gopal Temple in Kashmir Avenue locality, Amritsar (Punjab), over the idols and painting of Hindu gods in the garbage dumps when he was shot dead by Sandeep Singh. Reportedly, Sandeep shot him 5 times with a .32 bore licensed weapon. Allegedly, Sudhir was in a heated argument with two police officers when the gun fires were made. He was immediately rushed to the hospital where he wad declared brought dead.
Sudhir Suri during the protest in Amritsar

Sandeep Singh was arrested on the spot and his weapon was seized.
Sandeep Singh arrested after attacking Shiv Sena leader, Sudhir Suri
After getting arrested, Sandeep admitted that he had never met Sudhir before. Sandeep, who is a member of a radical Sikh group called Waris Panjab De group, told the police that it was his own decision to kill Sudhir. He further denied getting any kind of instructions from this group. The prime motives of the killing are still unknown. The supporters of the Shiv Sena leader, present at the crime scene, vandalized the killer’s car and the shop where he worked.
Accused Sandeep Singh’s car after the attack at the crime spot

In 2016, Sandeep Singh of Damdami Taksal was attacked by a group of Sikhs at Gurdwara Bhai Ram Singh, Vishwakarma Colony of Shimlapuri, in Ludhiana. His car was also smashed by the angry mob. The policed arrested the accused members of the attack, including the main accused Joga Singh Khalistani. This incident took place when Gurdial Singh, president of the management committee of the gurdwara, was honouring Sandip Singh with a Siropa (form of a felicitation), which offended certain group of Sikhs. Reportedly, Sandeep Singh was given the title of a killer. Reportedly, the members said,
Killers can’t be awarded with a siropa.”
Sandeep Singh (orange turban) after he was attacked in Ludhiana (2016)
The activists of both groups got into a heated argument which led to a clash. Sandeep was then attacked by Khalistanis named Harsimranjit Singh, Amandeep Singh, Jassi, and Amanjit Singh, in which they tossed his turban. Sandeep managed to escape from the gurdwara with the help of his supporters. Punjab-Sikh activist Joga Singh and his aides chased his SUV and damaged the windowpanes.
Sandeep Singh’s car, after being damaged by Punjab-Sikh activist Joga Singh and his aides
He received minor injuries and was immediately rushed to DMC Hospital in Ludhiana. After receiving first aid, Sandeep went back to Amritsar. Later, he blamed Joga Singh Khalistani as the main culprit behind the attack. Few days later, Sandeep hit Joga Singh’s motorcycle from the back in which both of them received severe injuries. On 6 October 2016, Joga Singh Khalistani, who is a member of Shiromani Akali Dal Amritsar’s youth wing, died after being hit by an Innova car at the back of his motorcycle. A case was registered against Sandeep Singh and six others. It is reported that Sandeep was never taken into custody while the others were bailed shortly after the accident.