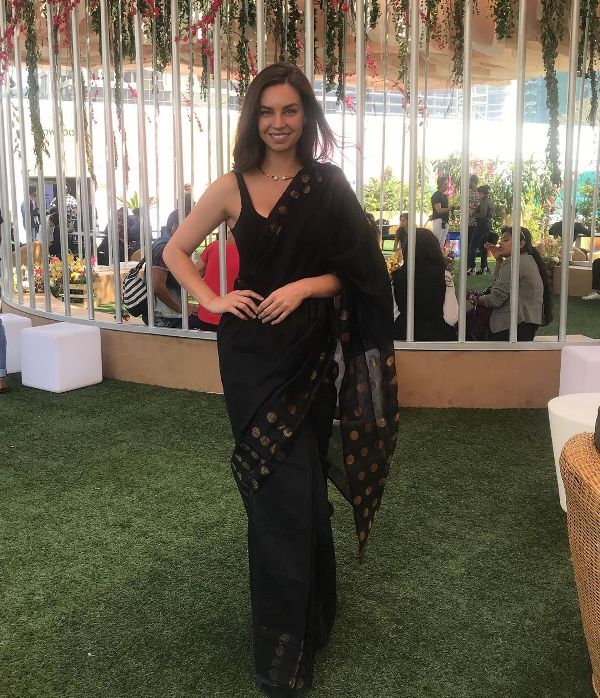 Sarah Todd is an Australian model, chef, restaurateur, public speaker, and author. She gained popularity when she made an Indian dish like Aloo Gobhi in 2014 Masterchef Australia which was its sixth edition. Since then, she has gone on to open 2 restaurants in India, written 2 books about cooking, and travelled extensively in various parts of India to learn about Indian dishes. She has participated in other editions of Master chef Australia and has also been featured in TV shows regarding her restaurants. She has proclaimed herself as an Indophile.

She was born on Sunday, 26 October 1986 (age 35 years; as of 2022) at Walkerston, Mackay, Queensland in Australia. Her zodiac sign is Scorpio. She started cooking at the age of 9 from her mother and learnt baking from her mother. At the age of 18, a modelling agency signed her and she moved to Sydney to work on modelling assignments for brands like Gucci and Hugo Boss. She developed an interest in Indian food when she moved to live with her parents-in-law in London, UK. In 2013, she got enrolled in Le Cordon Bleu, a cooking school in London. After that, she did brief jobs at many reputed restaurants before entering Masterchef Australia 2014 Show. She says that after the birth of her son, she realised that cooking was her passion so she took it seriously and became a restauranteur after opening restaurants in India.  She is living in India since 2014. She has also been a guest speaker at various reputed functions like the Economic Times Global Summit and the Hindustan Times Leadership Summit.
A childhood picture of Sarah Todd

Her father’s name is Steve, and her mother’s name is Lorraine. When she was 2 years old, her father left her and went to Japan. She was raised single-handedly by her mother. Her mother was also known as the ‘Pavlova Queen.’  Her mother has also survived Breast Cancer. She has 2 elder brothers, Stephen (age 41 years; as of 2022) who is a mining partner, and Matthew (age 39 years; as of 2022), who is a train driver.
Sarah todd (centre) with her son (in green jacket), nephew (wearing spectacles), mother (extreme right) and two brothers, Stephen and Matthew

In 2011, she gave birth to her son Phoenix who lives with her. Phoenix’s father is Devinder Singh Garcha, her fiance at that time. Her son Phoenix is also learning to cook from his mother and they cooked Massaman Curry in an episode of the cooking show Homestead To Fork. He lives primarily with his mother Sarah; however, when she is not present due to her business ventures, he lives with his father.
Sarah Todd with her son Phoenix

In 2009, she met Devinder Singh Garcha of Indian origin, whom she met in Sydney through a common friend. Then she moved to the UK to live with him and his parents. Both got engaged and both were planning to get married in 2015; however, they broke up and decided not to marry. He is currently working as a Senior Project Manager in Cleanaway Waste Management at Melbourne, Victoria, Australia.

In 2018, reportedly, she dated Imtiaz Ali for a very brief period of time.

She is a Christian.

She started modelling at the age of 18 and moved to Sydney. She started working for Chadwick modelling agency in 2005 and worked for them till 2010. In 2008, she became the Brand Ambassador for salon brand Bio Sculpture Australia and endorsed the brand for 4 years till 2012. In 2010, She worked for modelling agency Chic Management for a brief period of time. In 2012, she worked for Nevs Model Agency in London, UK. In 2012, she also appeared in the music video of song On Top by Australian singer Johnny Ruffo. In August 2012, she went to Hamburg, Germany to do modelling for 2 weeks for Body and Soul modeling agency. She has also launched Rhapsodie jewellery collection for popular brand Zoya Jewels alongside Sussanne Khan.
Sarah Todd (left) launching Rhapsodie Jewellery collection for Zoya Jewels

She started her journey as Chef when started living with her in-laws and enrolled herself at the Le Cordon Bleu cooking school in London. She worked as a chef in many reputed restaurants, specialising in French cuisine and learnt Indian cuisines (mainly Punjabi dishes) from her mother-in-law at her home. She gained many followers from India after she made Aloo Gobi in Masterchef Australia in 2014. She finished at 9th place in the show. She gained around 50,000 followers within a week after that particular episode aired. In 2015, she moved to India and opened her first restaurant Antares at Vagator beach in Goa, an Australian-themed restaurant for casual dining. She opened this restaurant in partnership with Delhi businessman Ashish Dev Kapur. She also made a TV series titled My Restaurant in India, which showed the process of building a restaurant. In 2016, the show was aired by the Australian broadcaster Special Broadcasting Service in more than 150 countries.
Sarah Todd (right) with her business partner Ashish Dev Kapur
In 2016, she made a TV series Serve It Like Sarah which showcased her time spent in Goa learning about Indian cuisines. It was made by FOX Life India. In 2017, she participated in the Indian restaurant entrepreneur show Grilled, made by FOX Life India. She was the judge in the show alongside famous Indian restaurateur Riyaaz Amlani and music director Vishal Dadlani.
Riyaaz Amlani (left), Sarah Todd (Center), and Vishal Dadlani (Right)
In 2018, she hosted the show Awesome Assam with Sarah Todd with Udayan Duarah of Assam. She showcased various cuisines of the Assam state of India along with its scenic landscape.
Sarah Todd during with shoot of the show Awesome Assam With Sarah Todd

Join us on a soul-stirring journey through the rich landscapes of #Assam with our new show, Awesome Assam with Sarah Todd, premiering Saturday at 8 PM. @Sarah_Todd_ pic.twitter.com/Q1tz0qAILp
— FOXlife India (@FoxLifeIndia) March 23, 2018

In the same year, she also shot for the show The Good Cooks and tried cooking local cuisines of Fiji. The show was filmed by the Australian Centre for International Agricultural Research, Australia to showcase Fijian cooking techniques.
Sarah Todd (centre) during a shoot of the show The Good Cooks
In 2018, she opened her second restaurant The Wine Rack in Mumbai. Her business partner was again Ashish Kapur. She also made a TV series titled My Second restaurant in India, which was aired again by the Australian broadcaster Special Broadcasting Service. She was invited to participate again in Masterchef 2020 which she declined due to her career commitments. In 2022, she was again invited to participate and finished at 2nd place. When asked about her career, she said,
“I’ve always been inquisitive and enjoy learning new stuff. When I was younger, I tried so many different things and kept searching for one thing I really loved doing. Luckily, modelling was something that just happened, but it wasn’t something that lit me up inside. So when I started cooking, when my son was born, I realised how passionate I was about it. I knew this was something I wanted to explore and make a career out of, so I gave myself one year to turn this into a career or go back to modelling as it was a steady career option, too. However, everything snowballed and I haven’t looked back since.”

She has spoken at various events all over the world and has given various interviews regarding her journey. She has also appeared in ET Global Business Summit 2019 alongside Indian Prime Minister Narendra Modi.
Sarah Todd speaking at ET Global Business Summit 2019
She has written 2 books, The Healthy Model Cookbook in 2016 and My Indian Kitchen in 2021.
Sarah Todd showing her first book The Healthy Model Cookbook
Sarah Todd showing her book My Indian Kitchen

Sarah Todd when her ankle broke during Covid-19 lockdown

Sarah and her son, Phoenix during premier of No Time To Die