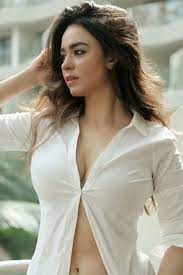 Soundarya Sharma (Actress) Height, Weight, Date of Birth, Age, Wiki, Biography, Boyfriend and More
Soundarya Sharma is an Indian actress and model. She serves in Hindi television and movies. She is best-known for featuring in web series like Raktanchal, Inspector Avinash and His Storyy. Soundarya has also conducted some workshops at the Lee Strasberg Theatre and Film Institute of the New York Film Academy.

Soundarya Sharma was born on 20 September 1994 in New Delhi, India. Her mother’s name is Usha Sharma. She completed her acting training from the National School of Drama, Delhi, and ACT 1 theatre group.
Bio

Soundarya began her career with the comedy-drama film Meeruthiya Gangsters in 2015. She got featured in the thriller movie Ranchi Diaries as Gudiya whose dream is to become a public sensation. Soundarya debuted with the television action-crime mini-series Raktanchal as Roli in 2020. It was inspired by Purvanchal’s real-life events in the 1980s
Soundarya later starred in the television drama series His Storyy as Rashmi. She did a tv action-thriller series Inspector Avinash as Payal Chaubey in 2021.
Education Details and More

Some Facts About Soundarya Sharma

If you have more details about Soundarya Sharma. Please comment below we will updated within a hour.