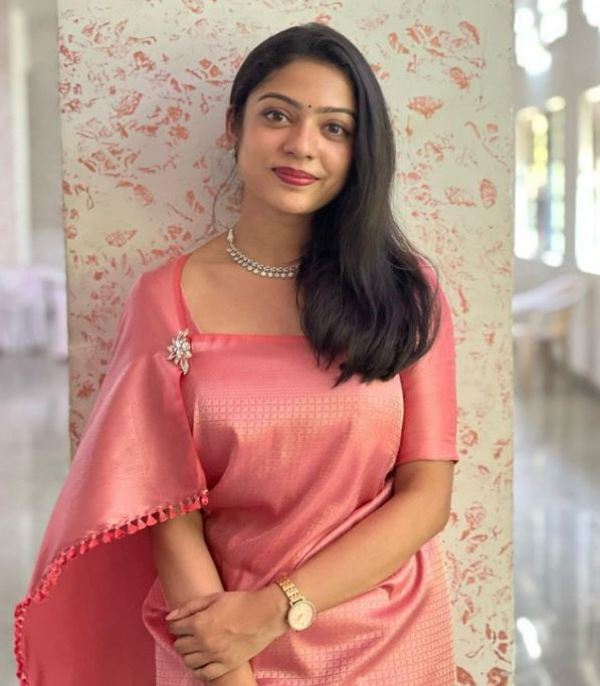 Varsha Bollamma is an Indian actor. She works mostly in Tamil, Malayalam, and Telugu films. She was initially recognised for her video in which she was delivering dialogues from a Tamil language film ‘Raja Rani’ (2013).

Varsha Bollamma was born on Sunday, 30 July 1995 (age 27 years; as of 2022) in Coorg (now Kodagu), Karnataka.
Varsha’s childhood picture
She grew up in Bangalore. Varsha graduated in microbiology from Mount Carmel College in Bangalore.

Varsha Bollamma belongs to a family from Karnataka.

In 2012, Varsha Bollamma made her debut with a Tamil language film ‘Theni Maavattam.’ She made her debut in the Mollywood film industry in 2018 with the film ‘Kalyanam’ in which she played the role of Shari.
Varsha Bollamma as Shari in the film ‘Kalyanam’ (2018)
In 2020, Varsha appeared in the Telugu language debut film ‘Choosi Choodangaane’ as Shruthi.
A poster of the film ‘Choosi Choodangaane’ (2020) – Varsha Bollamma with co-star, Shiva Kandukuri
Varsha has appeared in many other films such as ‘Vetrivel’ (Tamil) in 2016, ‘Ivan Yarendru Therikiratha’ (Tamil) in 2017, ‘Mandharam’ (Malayalam) in 2018, ‘Stand Up Rahul’ (Telugu) in 2022 and ‘Swathi Muthyam’ (Telugu) in 2022.
Varsha Bollamma (as Bhagya Lakshami) and co-star (as Bala Murali Krishna) – a still from the film ‘ Swathy Muthyam’ (2022)
Poster of the film ‘Stand Up Rahul’ (2022)